What's your favorite place to talk about Magic, and why? 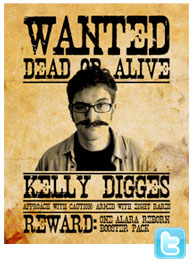 Kelly Digges: I spend a lot of my time talking about Magic, and when I'm not doing so at work because it's my job or at home with my fiancée, you'll most often find me on Twitter. I share the official @dailymtg Twitter feed with Monty Ashley (@montykins), and I also tweet occasionally on my personal feed, @kellydigges. Although you can't get any really deep discussion going, you can follow Magic personalities directly, respond to whatever random questions and hashtags pop up out of the general mindstream (#badtemplates was a favorite of mine), and throw out interesting questions of your own if you want to. Whatever's happening right now, you're a part of it.

Of course, Twitter's immediacy is also its drawback; #badtemplates is close to impossible to dredge up now. I mean, that was like two months ago! Practically ancient history, as far as Twitter is concerned. It's all about the current obsession, whatever that happens to be. I enjoy that; others might not, and I respect that. (Others might also be sick of hearing about Twitter. To them I say: Sorry, but get used to it.)

What's your favorite place to talk about Magic, and why? Click the Discuss link below to tell us your story and then see what everybody else has to say!