Tom Jenkot: Ugh. What a tough question. Is "With cards" a proper answer? Probably not.

One Sealed format I enjoy is Blind Sealed: Take six packs, pick three colors, extract only those colors from your card pool (in such a way as to not reveal the cards you have), add all artifacts, add all nonbasic lands, add six lands of each of those three colors, and shuffle up! You can remove two cards you've seen from your deck for the first three games and one each game after. Library searching cards are invalid, unless it's a land-fetching card (carefully find that land without looking at the other cards, please.) Sealed, check. Blind, check.

I recently spent a large portion of my free time putting together a Cube. It's like putting together your very own set of Magic. Sure the cards are already designed, developed, all arted up, text-templated, flavor-texted, and printed—but it's your own set in the end, reflecting exactly what you enjoy about Magic.

Currently Gatherer has 11,311 cards to pick from when building a Cube. Picking the best 540 cards out of that 11,000+ wasn't easy (Nor was the clean up after pulling Cube candidates from my collection.) The minimum amount of cards needed to make a Cube is 360 (which accommodates an 8 player draft,) but I like large crowds of like-minded Magic players, so I made mine bigger. I've taken the Cube out for a spin twice now and it was a blast both times.

540 of the prettiest cards you'll ever see will accommodate twelve players for a draft or six for sealed. I don't have any power nine, but there are some dooseies in there. Including all the planeswalkers, 4 Eldrazi cards, 40 awesome lands, and an even amount of mana-curve-balanced colored and artifact creatures and spells.

I incorporated a tribal theme into each color: Soldiers, Wizards, Vampires, Goblins, and Elves. The tribal cards make up a viable tribal deck in each color. There is also a viable artifact deck. I knew having a bunch of tribe-matters cards could make for bad game play, so only five cards of each tribe are tribe matters, while the majority are awesome in any deck.

Two-card combos also made the cut, like: Channel / Fireball, Vampire Hexmage / Dark Depths, Wall of Blood / Death's Shadow, and others. Most importantly, I put all the cards I personally love in the Cube; Gilder Bairn, Chaos Confetti (the only Un- card in the Cube—please tear it up if you see it. I have more!), Rite of Replication, a bunch of the world-upside-down Planar Chaos cards, and tons of others all made the cut.

All that said, I've just decided. My favorite format to play is ... wait for it ... IRONMAN.

No format deserves an all caps treatment like IRONMAN does. This format is not for the weak of heart. What is IRONMAN? This is IRONMAN: 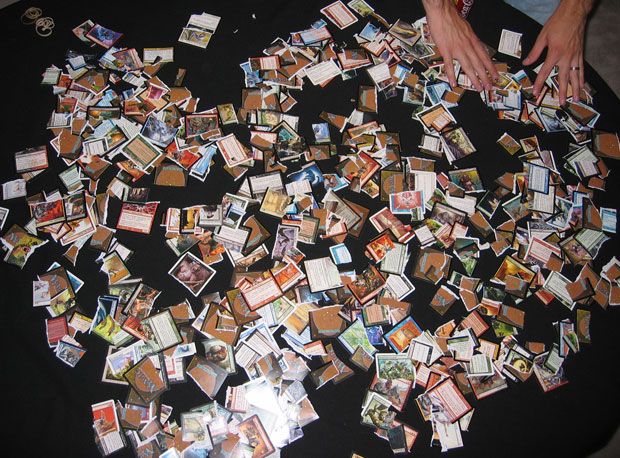 Players make decks from any resource of cards (sealed packs, left-over cards, etc.) If any card would go into your graveyard, you tear it up! Think of your graveyard as a paper shredder. Use a Doom Blade? Tear it up! Lose your Garruk's Companion in combat? To the trash! In half! Want all your creatures to be indestructible so they’ll never be torn up? Take that final loyalty counter off Elspeth, Knight Errant and then tear it up!

Ok, that last example has never happened on my watch. Because, really? Ouch.

What's your favorite way to play? Have a format that you think others would enjoy? Click the Discuss link below to tell us which formats you like and would suggest for others to try and see what everybody else has to say!