What's your favorite new mechanic in the Scars of Mirrodin Visual Spoiler?

Dave Guskin: My favorite new mechanic from Scars of Mirrodin is proliferate! 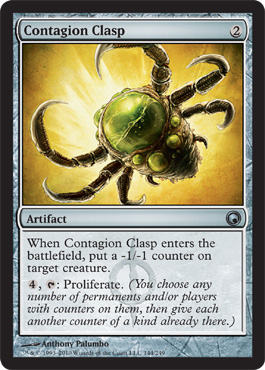 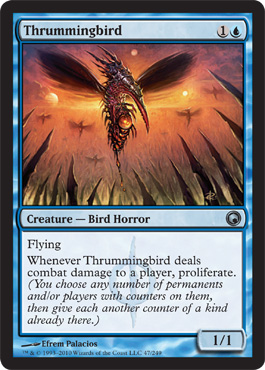 It's clearly powerful in combination with the -1/-1 counter theme prevalent in the set, and gives you a subtle spell-based way to increase the poison counters on your opponents—I've often thought of my Contagion Clasp sitting innocuously on the battlefield as a new-age Rod of Ruin. You'll also be surprised to find—as I was a few Sealed Deck games around the office, and as PT–Amsterdam finalist Brad Nelson was while playing Elspeth vs. Tezzeret at the Champion Challenge—the sheer effect a single proliferate can have on the battlefield. My personal best was seven permanents in Scars Limited: two artifacts with charge counters, four of my opponent's creatures with -1/-1 counters on them, and my planeswalker's loyalty counters.

But really, with the openness available to proliferate, the sky's the limit. I've had fun proliferating quest counters, +1/+1 counters, and level counters in Standard. I'm looking forward to making some decks where I can proliferate fade counters, storage counters, and maybe even omen and ki counters! While many of the mechanics in Scars of Mirrodin are fairly linear, proliferate is so modular that the possibilities can be almost daunting ... my favorite kind of mechanic!

What's your favorite new mechanic in the Scars of Mirrodin Visual Spoiler? Click the Discuss link below to tell us your story and then see what everybody else has to say!