What's the most ridiculous Limited game you've ever seen?

Kelly Digges: Why, funny you should ask—the most ridiculous Limited game I've ever seen was just a few nights ago, drafting Scars of Mirrodin with some old Magic buddies from my hometown. It looked like this: 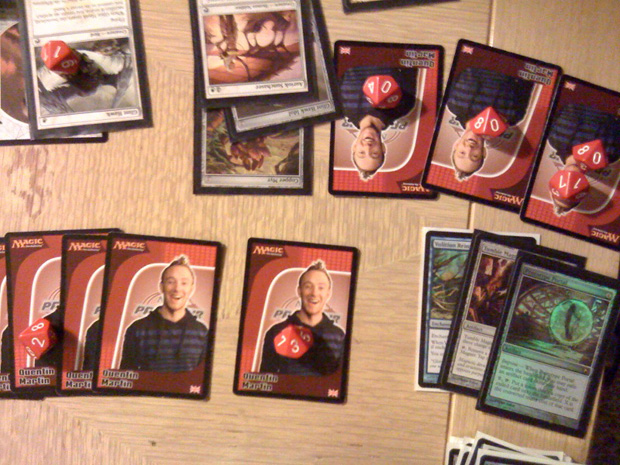 Not pictured is Nikki's Contagion Engine (groan, then groan again), which is why her Quentin Martins all have double-digit counters on them and Adrian has no creatures—not that her creatures could get through against his wall of Tumble Magnets anyway.

Adrian's plan was to draw the second Volition Reins he claimed was in his deck, steal the Contagion Clasp, and finally get through. By the end of the game, Adrian had an enormous stack of inactive Tumble Magnets off to one side, and Nikki's Tumble Magnets all had so many counters on them that I think they stopped keeping track.

So how did the game actually end? Adrian ran out of cards, either having been bluffing on the second Volition Reins or having drawn it too late.

What's the most ridiculous Limited game you've ever seen? Click the Discuss link below to tell us your story and then see what everybody else has to say!