What's the longest game of Magic you've ever played?

Kelly Digges: I've been in some long, drawn-out fights in my day. I've had two-player games stretch well over the hour mark. But I'm going to have to give the nod to a game I played with my friend Chris that started in 1998 and ended in 1999. 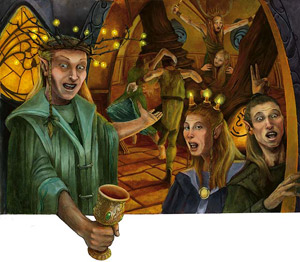 We didn't take a long break in the middle or anything, just a quick pause to watch the ball drop and have some sparkling cider with my folks. See, for whatever reason, Chris and I decided it would be fun to play a game that stretched from one year to another, so we sat down at around ten 'til midnight on New Year's Eve and played. I guess there weren't any good specials on TV. I don't remember what decks we used, but I assume mine involved Thallids somehow.

Okay, fine, that's totally cheating, even if it does look really long on paper.

The real answer: I once played in a multiplayer game that allowed anyone who was knocked out to immediately come back in, for an endless rotation, with the winner being the one with the most "kills" when everyone finally got tired and went home. I played for probably five or six hours before bowing out, but the game was still going on when I left. And since I left the state shortly thereafter and haven't seen most of those people since, I can't be sure they're not still playing....

What's the longest game of Magic you've ever played? Click the Discuss link below to tell us your story and then see what everybody else has to say!