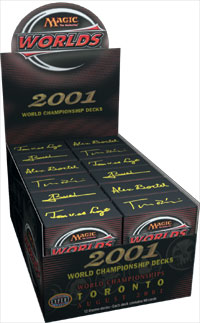 We gathered four of the best decks from the 2001 World Championships held in Toronto, Canada. Each of these decks was constructed by a Pro Tour player for the Standard Constructed envrionment at the time, which included the Masques and Invasion blocks and the brand-new Seventh Edition set. Each deck features a 60 card main deck, 15 card sideboard, 12 proxy cards along with a decklist, and factsheet. These cards are gold bordered and feature the 2001 World Championship Deck backing.

With the inclusion of Invasion Block cards in Standard Constructed, the field at Worlds 2001 was one of the most colorful. Multicolor decks were the choice of the day, although monoblue Orb-Opposition made a strong appearance as well. This was also the first time Seventh Edition cards were used at the Worlds tournament. With both Seventh Edition and Apocalypse sets in the format, every Magic "Painland" was available to players.

Play four decks from four of the top Pro Tour players: The Magic: The Gathering 2001 World Championship Decks. These four decks rose to the top of the heap at the Worlds tournament in Toronto, now you can own them and find out why.

What really makes these decks shine is when they're piloted by the best Magic players. Now you can learn how to play them like the pros: Get all four 2001 World Champ Decks today. 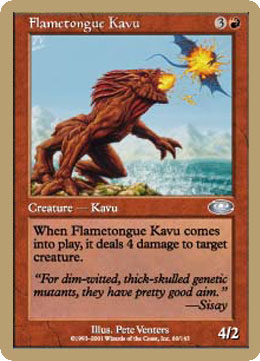