You Can't Handle the Reaper King

Unless perhaps... you are?

Today we take a look at not only at the preview card known as the Reaper King, but also at the interaction between Shadowmoor's design and development teams and the creative team during the development of Shadowmoor's Scarecrows.

To understand the Reaper King, you first have to understand its minions, the scarecrows. Scarecrows in Shadowmoor are a race of artifact creatures, some of whom, despite being colorless themselves, have "color matters" abilities. To know why the scarecrows were in the set in the first place, we have to look back at the set's design. 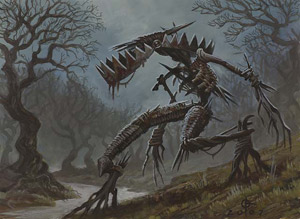 There were always going to be artifact creatures in Shadowmoor. One of the game play features of Shadowmoor Limited play (playing the set via Sealed Deck and Draft, instead of by constructing decks out of your whole collection) is the option of building mono-color, or at least mono-basic land type, decks. Due to the power of Shadowmoor hybrid, your deck powered only by Swamps can be full of black creatures, black-red creatures, and blue-black creatures. Your Swamps-only deck could easily be three colors—but even with hybrid giving you more cards to choose from for your deck, the set still needed more creatures that could support a mono-color strategy.

It's interesting to note that many of the Scarecrows ended up with "color matters" abilities, despite their colorlessness. There's a cycle of Scarecrows at common that have their abilities "turn on" when you control a creature of the appropriate color. And those abilities come up more than you might think, even in monocolored decks. You might think that your "mono-Swamp" deck might only be able to give Wingrattle Scarecrow (from the Card Preview Archive) persist, and not flying also, but then you find that you've been running blue-black hybrid creatures. Voila, a flying persist Scarecrow.

The Scarecrows Become Themselves

Let's back up a bit. Design and development had kept a rather high number of artifact creatures in the set. So we in the creative team (including me, in my main job) were all ready to concept up some artificial beings. This was pretty exciting; the idea of combining "creepy, eerie plane of eternal dusk" with "artifact creature" was making me all tingly inside. The idea of using the Scarecrow creature type was on the table pretty early, a fun revival of the old subtype only found on the card Scarecrow (and recently Oracle'd onto the Portal Three Kingdoms card Straw Soldiers). But we had thoughts of having a few Scarecrows, a few Golems, some Constructs, and whatever, all creepified. It was art director Jeremy Jarvis who suggested that all the artifact creatures could be Scarecrows, by some broad definition of "scarecrow." Our concept illustrator Richard Whitters was game, and ran with the idea, coming up with some sketches. (Richard, by the way, really likes it when I hover over him while he's drawing and say "Whatcha doin'? Are you drawin'? Wanna draw me? Draw me as a GIANT! Draw me as a giant, eating a KITHKIN! Do it! C'mon, Richard!" Yeah, he digs that. Especially when you clap and make him wear a little organ-monkey fez.) Here are some of Richard's sketches, which you may have seen in Jarvis's article last week. 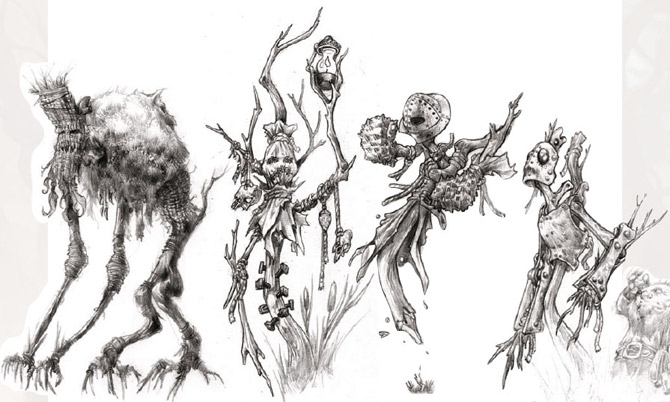 We loved these designs. Their backstory came quickly after.

The Nature of Scarecrows 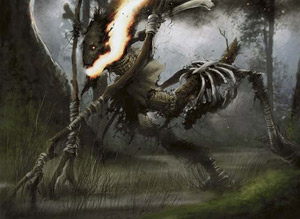 The story behind scarecrows is already creepy. They're false men, constructed of gourds, bits of straw, and castaway clothing, impaled on a post to give one's garden the vague impression of a humanoid presence. For Shadowmoor, though, their creepiness had to be cranked up even further. The tale goes like this.

Most of the scarecrows of Shadowmoor were built by kithkin cobblesmiths to perform basic farming tasks. Even on that dimly lit plane, kithkin have to raise springjacks and care for their sickly, nettle-infested crops, so enterprising hedge-mages of the douns (the Shadowmoor term for kithkin villages) built creatures to help with the chores. The cobblesmiths could only spare a few tools, bones, or scraps of wood to create the things, which caused the scarecrows to move in an unsettling, herky-jerky way. Some say the first scarecrow-makers used the enchanted wood of dead treefolk, and their movements are indicative of the wood's intrinsic rage. Whatever the cause of their strange movements, they didn't do their jobs very well, but at least when dark things in the night snatched them away, the farmers hadn't lost much.

Over time, as farmers moved or passed away, some of the scarecrows remained. Most of them continue to try to perform their intended actions, but removed of their context, their actions seem bizarre and inappropriate. A scarecrow designed for scything grain, for example, can seem menacing when it comes at you in the dark, its sickle-arm raised high and its empty eyes trying to decide whether you are ripe for mowing. Other scarecrows are more innocuous in purpose, but can still be strange and scary. 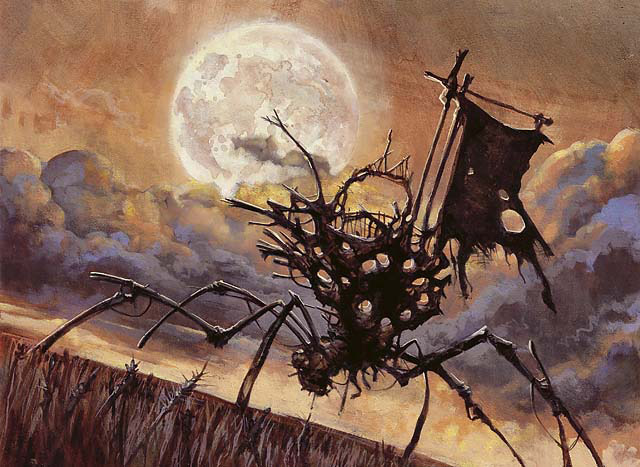 So, as the creative vision for scarecrows became solidified and artist sketches started rolling in, they immediately felt at home. They had become a tribe, sort of. They had an identity of their own, but only insofar as they were all strange contrivances of not-entirely-sane minds. Development expanded the role of Scarecrows, and between design and development, some uncommon and even rare ones were created.

Meanwhile, the cycle of monocolored hybrid cards (such as Beseech the Queen, which costs

) had inspired Shadowmoor card designers to explore other ways of using hybrid to mess around with mixing colorless and colored costs. But they didn't catch on. These designs were all scrapped as being too weird, too "different for different's sake," or too hard to figure out in a set already full of unusual mana costs. They were all scrapped, that is, except for the weirdest one of all, which happened to be an artifact creature.

Now that... is something special.

The Reaper King was a controversial card among R&D. His mana cost is bizarre, and works best in a four- or five-color deck—in a set that's almost all about monocolored and two-color decks. He's a tribal "lord"—in a non-tribal set, for a tribe that barely has any support. He generates a powerful reward—repeating Vindicates!—for building around a tribe that was supposed to be about filling creature quotas in Limited. He's a violation, really, of everything the set is supposed to be about.

But somehow, in my book, he became the perfect success story—the Reaper King came about, and stuck around, because of flavor. People fell in love with Scarecrows and their herky-jerky creepiness, and decided that the lovable new tribe needed a King. As soon as the King was created he was mocked, bizarro "goldbrid" abomination that he was, but he still made it through the "stickering" process and into Sealed playtests. Many loved him, many hated him, but everyone had an immediate reaction to him. To his supporters, every accusation hurled at him just seemed to increase his mystique. Somehow his presence was itself a kind of irrational self-justification. His very wrongness was so right for his flavor and character, that against all odds, he survived to show up in packs of Shadowmoor. He's unsettling, inappropriate, and just plain weird. Exactly as the King of the Scarecrows should be.

I'm not usually one to endorse the "if you don't like it, then it wasn't meant for you" argument. But the Reaper King got to me, and I find myself strangely defensive about him. Don't touch my Reaper King. If you're not a fan, it's because you can't handle him. If you turn up your nose, it's because you're not worthy of His Rotting Gourdness. It's as if one of those creaking, animated, bone-and-wood scarecrows got fed up with the mistreatment of his maligned race, grew horribly in stature and mass, and claimed dominion over his rogue minions, sheltering his twisted children under his spindly, wicker arms. Maybe I have a little scarecrow in me, too, because I feel a little stronger, a little fiercer, in his presence. And whenever I show up next to somebody's game of Magic and see the stringy pulp of his putrefied crown, I feel like vindicating something. 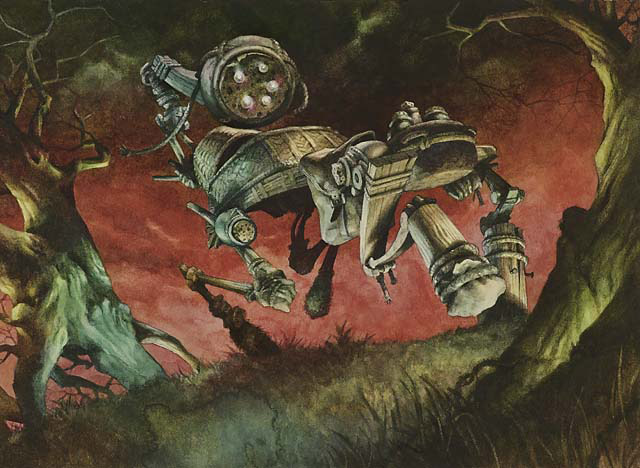 Dear Doug Beyer,
Regarding your article "The Shadowy Pendulum":
Was there a consideration to make the elves of Lorwyn green-white and the elves of Shadowmoor black-green? Elves in general pre-Lorwyn seemed like the "good guys," and as black-green in Shadowmoor, they could have better reflected the set's turn to darkness.
–Jacob S.

It's true that elves are kind of the "odd tribe out" when it comes to the tone switch between Lorwyn and Shadowmoor. In Lorwyn, they're imperious tyrants who rule over the sunlit plane, casting disdain at any creature below their exacting standards of beauty. In Shadowmoor, they're noble seekers of light and beauty in an otherwise gloom-bound world. Meanwhile, most of the other Lorwyn tribes do the opposite thing—they become creepier and gloomier along with the plane. Did we consider having elves NOT buck the trend? 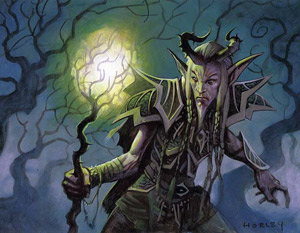 The decision to make elves green-black was solidified pretty early on. As the creative vision for Lorwyn became clear, it became equally clear that elves, the quintessential children of nature, would be the masters of this world of nature and beauty. Elves are green, but that "masters of" flavor pointed toward black, and toward a new identity for elves. We liked the departure from the traditional flavor of elves, and it gave Lorwyn a race that could serve as its "villain" without straying too far into "Big Bad Evil Guy" territory.

Another bonus was that playing up the sense of elves as haughty predators let us give them a very dramatic flavor switcheroo in Shadowmoor. They are real jerks in Lorwyn, lording over the realm and killing off the ugly. They get their comeuppance in Shadowmoor by having the world get far, far nastier about them, which drops them out of their seat of power. Elves are outnumbered by the other creatures in both sets, but in Shadowmoor, a world full of creepy monsters, that's a truly scary proposition—and a satisfying reversal from a story standpoint.

Lastly, as you may notice, almost all of the Lorwyn races have become an allied color combination in Shadowmoor. If elves went from green-white to green-black, we couldn't have created that pattern, and the elves wouldn't have fit so nicely into Shadowmoor's hybrid mana theme.