elcome to the Arena of the Ancients!

Before we get to the Top 4, let's see how we got here.

In the Top 8, we had 7 different expansions represented (Stronghold, Betrayers of Kamigawa, Guildpact, Onslaught, Legions, Invasion, and Prophecy) and a total of nine creature types (Sliver, Rat Ninja, Dragon Wizard, Gorgon, Angel, Minion, and Spellshaper). In the Top 4, that shook down to a Rat Ninja from Betrayers of Kamigawa, a Gorgon from Onslaught, an Angel from Legions, and an Angel from Invasion. 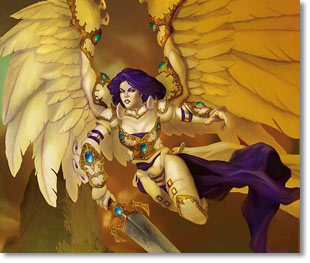 The Hammerheim first seed strolled straight to the Top 8, taking out Hazezon Tamar; Kokusho, the Evening Star; and the overachieving Tahngarth, Talruum Hero on her way to face second-seeded Phage the Untouchable in a highly anticipated match. Phage had arrived at the party fresh from defeating Isamaru, Hound of Konda; the Ghost Council of Orzhova; and Meloku the Clouded Mirror. Phage's tune-up fights (a dog, a bunch of ghostly bureaucrats, and a foggy mirror) failed to provide enough training, and Akroma won, showing that after all is said and done, an "Angel" is more powerful than a "Minion".

Power/Toughness: 6/6
Creature Type: Angel
Flavor Text: "No rest. No mercy. No matter what."
Plane: Dominaria
Background: Created from the arm of the mage Ixidor and made in the image of his fallen beloved, Akroma's primary task was to eradicate Phage. She was the general of the Southern Order, the mighty army that routed the forces of Krosa and Cabal, and her Vengeance is well known, as is her Blessing. 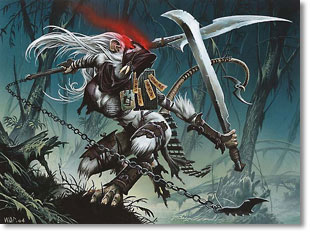 Top Seed Sliver Queen's run to the Top 4 ran into a roadblock in the form of a Rat Ninja. Ink-Eyes had faced a murderer's row of superpowerful opponents: Memnarch; Arcanis the Omnipotent (he's omnipotent!); and Circu, Dimir Lobotomist before defeating the mighty five-colored Queen. The Queen had soundly defeated play-in game winner Vhati il-Dal; Silvos, Rogue Elemental; and Rorix Bladewing.

Power/Toughness: 5/4
Creature Type: Rat Ninja
Plane: Kamigawa
Background: After being cast out by the Okiba, Ink-Eyes was found by the ogre Muzan, who treated her like a slave. Eventually, Ink-Eyes cut down her master to curry favor with the oni Kuro.

Oh, and she's been a wallpaper. 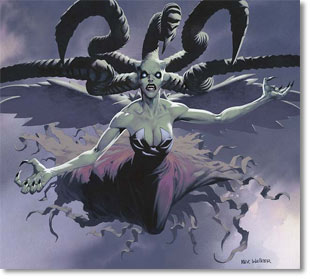 The last remaining Pit Fighter in the competition started off by beating Johan and Kodama of the North Tree before taking it up a notch and slaying two dragons back-to-back. First Yosei, the Morning Star went down, and then Niv-Mizzet, the Firemind's run ended in the Top 8. Niv-Mizzet had beaten Kataki, War's Wage; Mirri, Cat Warrior; and Kiki-Jiki, Mirror Breaker, facing an unprecedented number of Ks and Rs in his opponent's names.

Power/Toughness: 5/5
Creature Type: Gorgon
Flavor Text: "My eyes are my strongest feature."
Plane: Dominaria
Background: After Chainer destroyed the Cabal's original base of operations (in Torment), they moved to their southern city of Aphetto, constructing a Grand Coliseum to hold bigger and better pit fights than ever before. They needed more spectators and fighters, so they opened their doors to the rest of Dominaria, and hordes of beings flooded into Otaria. Visara was one of the most feared fighters in the Pits. 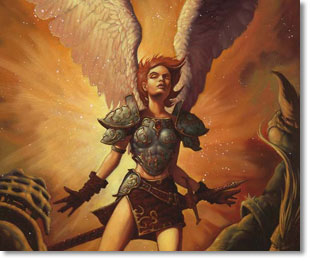 Pendelhaven started off as the Region of Upsets, and it carried that tradition all the way to the Top 8, where Reya (a fourth seed) faced off against eleventh-seed Mageta the Lion. Reya had faced a reasonably easy set of opponents, dispatching Godo, Bandit Warlord; Volrath the Fallen; and Keiga, the Tide Star, each of whom had won an upset victory in the first round. Mageta took a harder road, knocking off Karn, Silver Golem and the Ascendant Evincar before a stunning knockout of Rith, the Awakener in the third round.

Power/Toughness: 4/6
Creature Type: Angel
Plane: Serra's Realm/Dominaria
Flavor Text: A beacon of hope for a battered army.
Background: Little is known about Reya other than that she was a Serra angel who became a symbol of endurance for those who fought Yawgmoth's forces during the Phyrexian Invasion. Some speculate that she was one of the few survivors of Serra's Realm after Urza collapsed the plane into a powerstone that was used to fuel the skyship Weatherlight.

The Arena of the Ancients will be the region for the Top 4. We've got a monoblack matchup (Visara vs. Ink-Eyes) and a monowhite matchup (Akroma vs. Reya). Which one will win the ultimate battle of Legends? Which one will be deemed the coolest Legend of all? We won't know . . . until YOU DECIDE!