You Make The Card Wrapup

, it’s official. The very first “You Make the Card” is now over. After twenty four steps, you, the Magic playing public/MagicTheGathering.com faithful readers have designed your very own Magic card: Forgotten Ancient. So without any further ado, here is the card you will see print in the 2003 spring expansion: (Be aware that there will be a few changes such as adding an expansion symbol).

As we wrap up our first “You Make the Card,” I thought it might be fun to run through all the decisions you made.

We started by letting you choose the color. (We didn’t allow voting for artifacts or lands.) Here’s how the vote turned out:

Green edged out blue in one of the closest votes of the entire feature.

Once we knew the card was green, we let all of you choose which card type. Here’s how the vote went:

This vote was much more lopsided with creature beating the other three choices combined.

In an attempt to allow you the ability to affect not just the card, but how the card was going to be created, the next vote allowed you to pick which path you wanted to take to make the card by selecting which element of the card you would vote on next. Here’s how that vote went:

Once again, the first choice won by a landslide. You wanted to start with the card mechanic. The high voter turnout also made us implement secure polling.

This was the step where we asked all of you to send in your card mechanic ideas.

And boy did you deliver. We received over 5000 card mechanics. From these we selected a top ten for voting:

Card Mechanic #2 - When CARDNAME is put into a graveyard from play, you may reveal the cards in your library. If you do, target opponent chooses from among them three creature cards with different names. Put one of them into play and the rest into your graveyard. Then shuffle your library.

Card Mechanic #3 - Whenever CARDNAME deals combat damage to a player, you may search your library for a card named CARDNAME and put it into play. If you do, shuffle your library.

Card Mechanic #4 - All creatures able to block CARDNAME do so.
Whenever a creature blocks CARDNAME, you may draw a card.

Card Mechanic #6 - XM, T: Reveal the top X cards of your library. Put all creature cards with converted mana cost X into play and the rest into your graveyard.

Card Mechanic #8 - When CARDNAME is put into a graveyard from play, you may return it to play under its owner's control at end of turn.

Card Mechanic #9 - At the beginning of each player's upkeep, if you control four permanents named CARDNAME, you win the game.

Card Mechanic #10 - Whenever a player plays a spell, you may put a +1/+1 counter on CARDNAME. At the beginning of your upkeep, you may remove all +1/+1 counters from CARDNAME and distribute them among any number of creatures.

One of the rules of “You Make the Card” is that no vote could win if it didn’t have at least a third of the vote. This meant that most big votes had a run-off of the top three votes. For card mechanics, the three top vote-getters was #7, #8 and #10.

Alex Freeman, Mechanic #10’s designer earned the right to give his creation a design name. He, of course, chose the name "Mr. Babycakes."

Once we knew the mechanic, we asked you if you wanted to go down a path that had been suggested on numerous threads on the bulletin boards. Should Mr. Babycakes be a wall? Your reply:

The vote was close but the majority of you wanted to beatdown with Babycakes.

Next, we had all of you vote on how big Mr. Babycakes would be. The three sizes were defined as such:

Here’s how the vote went:

The voting was clear. You wanted a small (and most likely cheap) creature.

Once we knew you wanted a small card, the next step was to give you a choice of power/toughness/mana cost combinations:

Here’s how the run-off looked:

You chose to have a creature with enough toughness to survive early attacks.

Once we had the mechanic, it was time for you to choose the creature type. Here were the ten choices:

Here’s how the run-off went:

This vote was pretty tight, but when all was said and done Mr. Babycakes would become an Elemental.

For this step we explained to you the idea of card concepts--the idea of what the card represents so that the artist has some idea what they need to illustrate. Afterwards, we collected your card concepts.

From your numerous ideas, the Creative Text guys (the people in charge of making card concepts), whittled down these top ten choices:

Card Concept #1 - A humanoid elemental of moss supports itself with a hand against a dead tree. From where the elemental touches, it spreads wild regrowth.

Card Concept #2 - A shambling plant-creature which can quickly grow large thorny spikes to protect itself. Afterwards it can shed these thorns, which make excellent weapons.

Card Concept #3 - A Venus flytrap with an oversized mouth inhales a spell. Tubules emit the spell from behind; small buds are seen.

Card Concept #4 - A lurching, hunched creature, completely covered in vines except his eyes. A huge malignant blossom protrudes from his back. His arm is strangling a wizard.

Card Concept #5 - A growing fungus-type creature that can shoot spores from itself to enhance other creatures' strength.

Card Concept #6 - A humanoid figure with skin made of bark, stag horns on head, and wood spikes on forearms. Surrounded by green aura.

Card Concept #7 - A chaotic and grotesque mass of overgrowth that is spewing all sorts of deadly-looking vegetation that could be used to enhance nearby beings.

Card Concept #8 - A green cactus-like creature. It feeds on magical energy, and can use this energy to give spines to other creatures nearby.

Card Concept #9 - A sentient mass of thorned vines. The vines can either act as armor for friendly forces or strike against foes.

Card Concept #10 - A humanoid figure that appears to be riding a clawed creature; they are one creature. They are composed of many green branches that are wrapped together and speckled with thorns.

And here’s how the initial vote went:

It’s interesting to note that the top vote-getters for this round were card concepts #1, #2, and #3 in that order.

Once we had a card concept it was time to pick an artist. Magic’s art directors picked a list of eight artists whose style they felt best fit the card concept. These artists were:

The top three vote-getters (Matt Cavotta, Jim Nelson, and Mark Tedin) had a run-off. In a very close vote, Mark Tedin edged out Matt Cavotta by less than 50 votes. Mr. Babycakes would be illustrated by one of the old timers of Magic art (the only one on the list that illustrated cards in Alpha), Mark Tedin.

It was now time to give Mr. Babycakes a real name. We asked you to send in suggestions.

While we sorted through all the name submissions, we gave you a chance to look at three different sketches drawn by Mark Tedin. In each one, Mark took a slightly different take. Here they are: 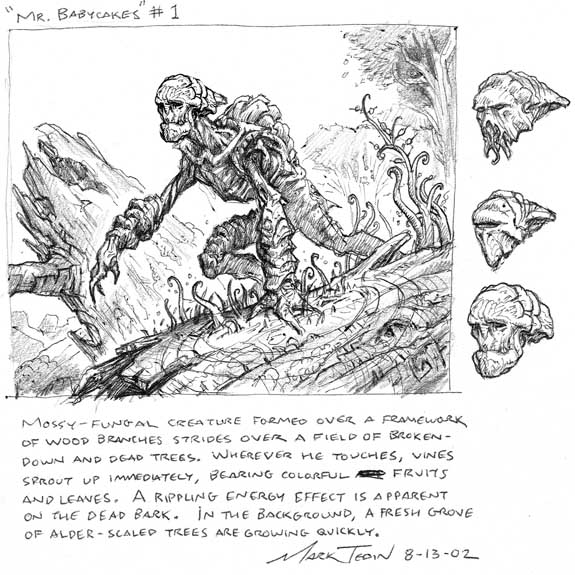 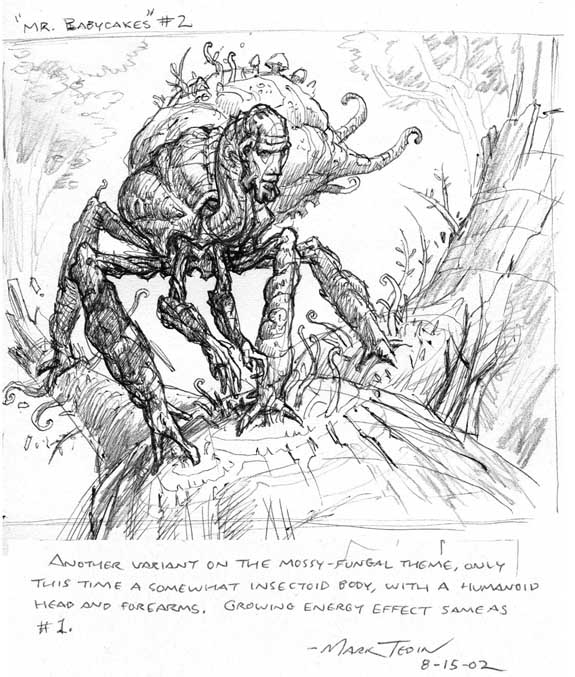 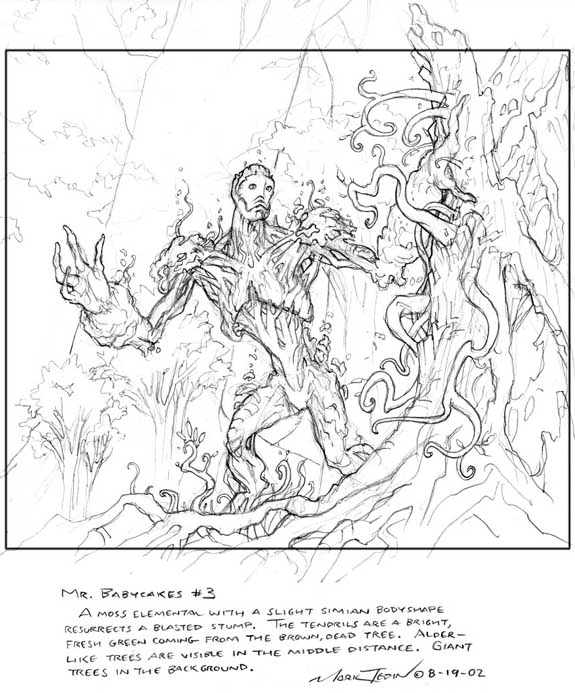 And the result of the vote:

With Sketch #2, Mark attempted a different take on an Elemental, but the majority of you seemed interested in a more conventional approach.

Early in the process, I mentioned to you that after you designed the card, it would have to go to development. While you were busy designing some of the more flavorful aspects of the card, R&D was playtesting Mr. Babycakes. And they discovered it was a little too good. This step developer Brian Schneider gave all of you three options for how to adjust Mr. Babycakes:

In the end, you chose to keep Mr. Babycakes a 0/3 but change its mana cost from

. Moving the mana cost from two green mana to one green mana created a lot of debate on the boards. Players were split over whether the easier ability to splash Mr. Babycakes was a positive or a negative.

It was now time to pick Mr. Babycakes’ new name. The choices were:

Also, to help you understand how R&D use dual process (and because we were running out of time), we asked you to send in your flavor text ideas.

The run-off went as follows:

Finally, we came to our last vote, Forgotten Ancient’s flavor text. Here are the top ten selected by the Creative Text team from your submissions:

And the last run-off. I believe this is the only run-off that produced a different outcome than the original vote. I guess the pun-lovers were split:

As we were wrapping up the flavor text votes, Mark Tedin was wrapping up his work on the art for Forgotten Ancient. The card at the top shows what it looks like in the frame, but that's not nearly as impressive as the full piece: