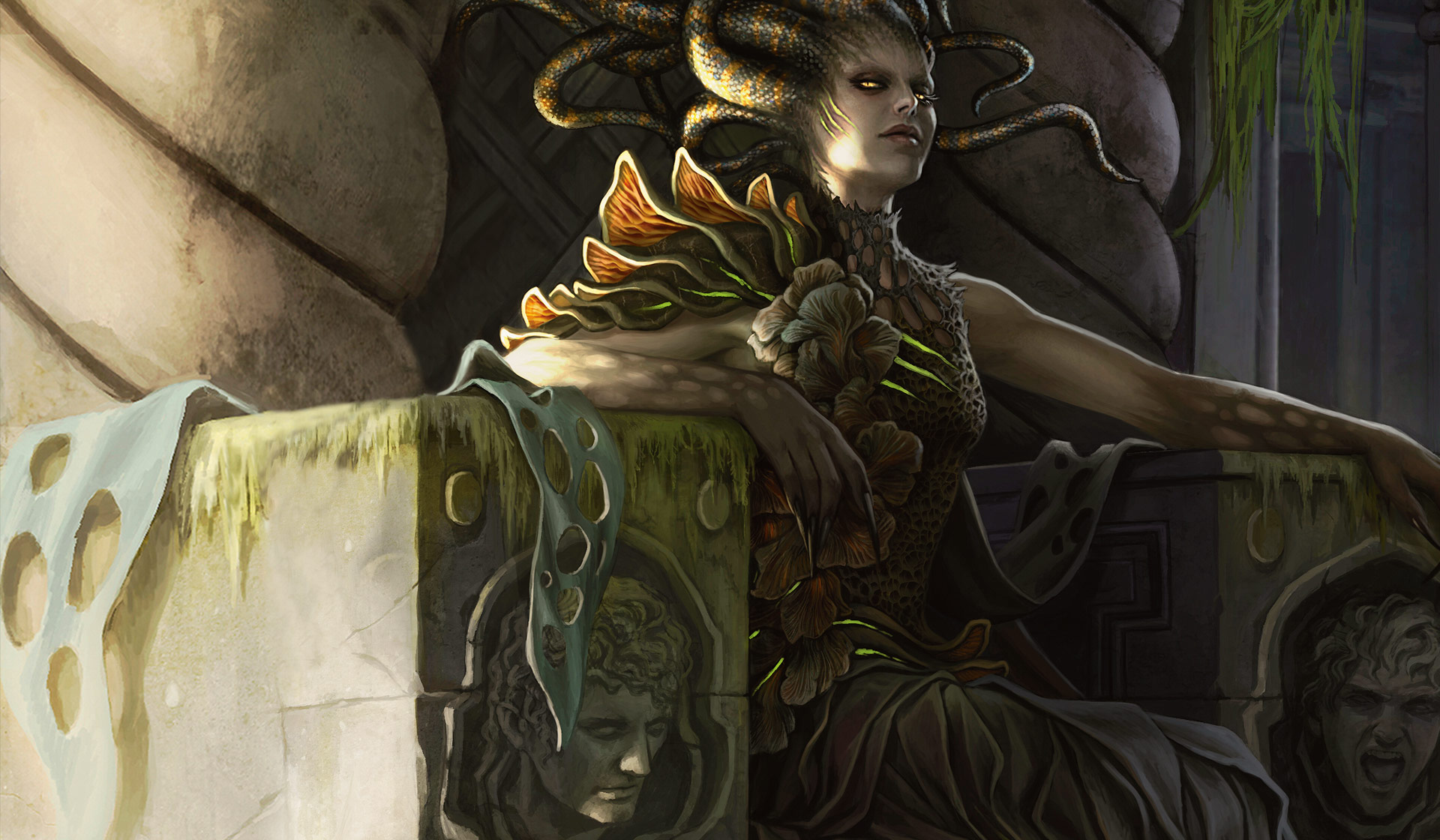 Welcome to another year of the Magic: The Gathering Online Championship Series!

There are several ways to qualify for the Championships:

The start of the MOCS journey begins by earning MOCS Qualifier Points (QPs). MOCS QPs come from several different sources, as shown on the table below. Generally speaking, competitive events will award QPs to those who finish well.

As always, prize details for a specific event can be found in the client using the "View Prizes" button in the Event Details window.Events not listed on this chart do not offer QPs.

Because QPs are specific to each year, all QPs for 2018 will be removed after the final MOCS Preliminary event of that year. QPs earned after that point will be treated as 2019 QPs.

Players at who have reached a Silver or higher level of the Pro Player Club will receive MOCS QPs each month based on their level. These points will be granted on the third Wednesday of each month.

Wizards of the Coast reserves the right to add or remove qualifying formats, alter events that award Qualifier Points, and/or adjust the number of QPs offered by any event with a minimum of 24 hours' notice.

After collecting 35 or more QPs, the next step is to join a MOCS Preliminary event (MOCS Prelims), formerly known as a MOCS Monthly event. There are usually two MOCS Prelims per month, and each of them feeds a specific MOCS Playoff event. MOCS Prelims can be Phantom Sealed (generally using the current set), Modern, or Standard.

After going 6-2 or better in a MOCS Preliminary, winning a MOCS Playoff event is the last step before reaching the Magic Online Championship. Each Preliminary qualifies players for a specific Playoff event, so players who do well in MOCS Prelims can find the date of that event on the calendar below.

The MOCS Playoff events are always Constructed, but that's just one route available. In addition to the path leading from QPs to MOCS Preliminary and MOCS Playoffs to the Championship, the MOCS Open events allow anyone to try their hand at earning an invitation to the Championship. Players don't need to earn points or another qualification to enter, and because these events are Sealed, players don't even need a deck.

Several of the tables above have referenced "Leaderboard Points." These offer another way to secure an invitation to the Championship at the end of the year through consistent success throughout the year, even without winning an event.

The Leaderboard can be found at MTGO.com/leaderboard and is updated on the Wednesday after a weekend with a Preliminary, Playoff, or Open event.

In May of 2017, Magic Online introduced the Format Challenges: weekly tournaments with exciting prizes in each of the major nonrotating formats: Modern, Legacy, Vintage, and Pauper. In 2019, these events will be more integrated with the Magic Online Championship Series. Players who want to specialize and master one of these nonrotating formats can earn specific Format Points (Pauper Points, Modern Points, etc.) that can be used to join quarterly Format Playoff tournaments. Those in turn will feed into a single 32-player Format Championship that awards an invitation to both the Mythic Championship and the Magic Online Championship, and the title of 2019 Format Champion.

Here's how that all will work: While the Format Challenges in the past awarded MOCS QPs, they will now award both MOCS QPs and Format Points (FPs). These FPs are new digital objects that will appear in your collection and stick around for the whole year. They're also the entry option needed to join the Format Playoff events.

And here's how players can earn them:

Format Playoff events are the culmination of months of competition in each of the four major nonrotating formats. These events allow players to compete with other Format Challenge veterans in an exclusive tournament with prizes above and beyond what a normal Format Challenge offers.

Each Format Championship is a distinct 32-player event, representing the very top of that format's play. Each player who reached the Top 8 in one of the Format Playoff events is eligible to play in the tournament that will define the champion of the format itself.

The most prestigious Magic Online event every year, the Championship is a tournament held in person in the Seattle, Washington, USA area at a time and place to be announced in early 2020. The top 24 players battle it out over several days of competition to claim the trophy, the title of Magic Online Champion, and their share of $250,000.

The specific format or formats used for the event will be announced at least one month prior to the event.

The prizes for the Magic Online Championship are as follows:

Wizards of the Coast reserves the right to modify, reschedule, and/or delete any tournament for any reason, including without limitation, if in its sole judgment, that tournament's integrity has been compromised by an unforeseen technical issue and/or error in that tournament's administration.

For all events that require an invite, Qualifier Points, or Format Points to enter: if a player believes they should be able to enter the event and cannot, it is their responsibility to contact Game Support before the event begins. Once the event begins, players cannot be added to the event.

Connectivity and Other Event Problems

Players who experience issues during a premier play event should contact a Digital Event Coordinator (DEC) in the appropriate chat room. For MOCS events, that will typically be #MOCS. They're there to solve problems that may arise.

Wizards of the Coast is not responsible for the results of any disconnection or network problems experienced by players. Please refer to these guidelines for more information on stability and connection issues in MTGO premier play.

Players in all Magic Online events are required to follow the End User License Agreement, as well as the Bribery, Splitting, and Collusion policies found here.

Each MOCS Preliminary and Playoff event is marked with its quarter: Q1 through Q4. Each Preliminary event feeds into the Playoff of the same quarter. All formats are listed through the end of March. As the year progresses, more event formats will be added. These additions will be announced in the weekly announcements.

This calendar can also be found here.

All times listed on this table are in Pacific Time. Times marked with an asterisk (*) are UTC-8, all others are UTC-7. Events named in bold qualify players for the Magic Online Championship.

All prizes are awarded "as is" and without warranty of any kind, expressed or implied, (including, without limitation, any implied warranty of merchantability or fitness for a particular purpose). This is a contest of skill and, therefore, there are no odds of winning as is the case with a game of chance. All applicable taxes, fees, duties, tariffs, passport or visa costs, and any license, destination, entry, exit, and/or delivery charges are the sole responsibility of each player. Taxes on the prizes (including, without limitation, income taxes), if any, are the sole responsibility of the player winners.

The Magic Online Championship Series eligibility requirements are as follows:

All Magic Online players who meet the eligibility requirements set forth herein are eligible to compete in this online tournament series. All Magic Online players are eligible to compete in the 2019 Magic Online Championship Series except (a) players who are otherwise ineligible to engage in tournament play pursuant to the Magic Online User Agreement and (b) employees or contractors of Wizards of the Coast LLC ("Wizards"), Hasbro, Inc. ("Hasbro"), or each of their respective subsidiaries or affiliates or their advertising or promotion agencies, or those who are domiciled with any such person, or those who have been disqualified for other reasons (see below). This is a skill-based tournament based on a player's ability to defeat other players.

Players may be disqualified if they are suspended from Magic Online for any reason, including without limitation, a violation of the Magic Online User Agreement.

Although players may have multiple accounts qualified for a Preliminary Event or a Playoff Event, players are not permitted to have more than one of their accounts entered in any single event at one time. Players are not permitted to have any accounts entered in events played by other players for any reason. If a player is discovered to have more than one account playing in a Preliminary Event, Playoff Event, Open Event, or Format Event before, during, or after the event, Wizards may take action against that player's account(s), up to and including disqualification with no refund of product and/or event tickets, suspension of the offending account(s), and/or termination of the offending account(s). Using an account other than your own, allowing any other player to use your account, selling your account, and other similar actions are all violations of the Magic Online User Agreement. If you play in Magic Online tournaments, win, and expect to get your prize, be very, very sure you are playing on your own account. We do not recognize excuses, such as "I and a friend jointly own the account," "It's my brother's account but he gave it to me," or similar. The only exception is an adult may authorize a single dependent child age thirteen to eighteen to play on an account that the adult has established.

To be eligible to participate in the Magic Online Championship Series, the following requirements must be met:

Release: By entering (or consenting to the entry of a person under the age of eighteen) the 2019 Magic Online Championship Series, each participant (or the participant's parent or legal guardian, if the participant is under the age of eighteen) and the winner (or the winner's parent or legal guardian, if the winner is under the age of eighteen) thereby release Wizards, Hasbro, and each of their respective parent companies, subsidiaries, affiliates, directors, officers, employees, and agencies from any liability whatsoever and waive any and all causes of action related to any claims, costs, injuries, losses, or damages of any kind arising out of or in connection with the 2019 Magic Online Championship Series or delivery, misdelivery, acceptance, possession, or use of or inability to use any prize (including, without limitation to, claims, costs, injuries, losses, and damages related to personal injuries, death, damage to or destruction of property, rights of publicity or privacy, defamation, or portrayal in a false light, whether intentional or unintentional), whether under a theory of contract, tort (including negligence), warranty, or other theory. Except where prohibited, you agree that any and all disputes, claims, and causes of action arising out of or connected with this contest or any prize awarded shall be resolved under the laws of the State of Washington, without respect to any conflict of law issues, and participants agree that such shall be resolved properly, without resort to any form of class action, and exclusively by the US Federal and State Courts of King County, Washington, USA. All of Sponsor's decisions regarding the application and interpretation of the Rules are final.

Wizards, Hasbro, and each of their respective parent companies, subsidiaries, affiliates, directors, officers, professional advisors, employees, and agencies will not be responsible for: (a) any late, lost, misrouted, garbled, distorted, or damaged transmissions or entries; (b) telephone, electronic, hardware, software, network, Internet, or other computer- or communications-related malfunctions or failures; (c) any event disruptions, losses, or damages caused by events beyond the control of Sponsors; or (d) any printing or typographical errors in any materials associated with the 2019 Magic Online Championship Series.

Wizards of the Coast reserves the right to modify, reschedule, and/or delete any tournament for any reason, including without limitation, if in its sole judgment that tournament's integrity has been compromised by an unforeseen technical issue and/or error in that tournament's administration.

Participation in 2019 Magic Online Championship Series is void where restricted, taxed, or prohibited by law.