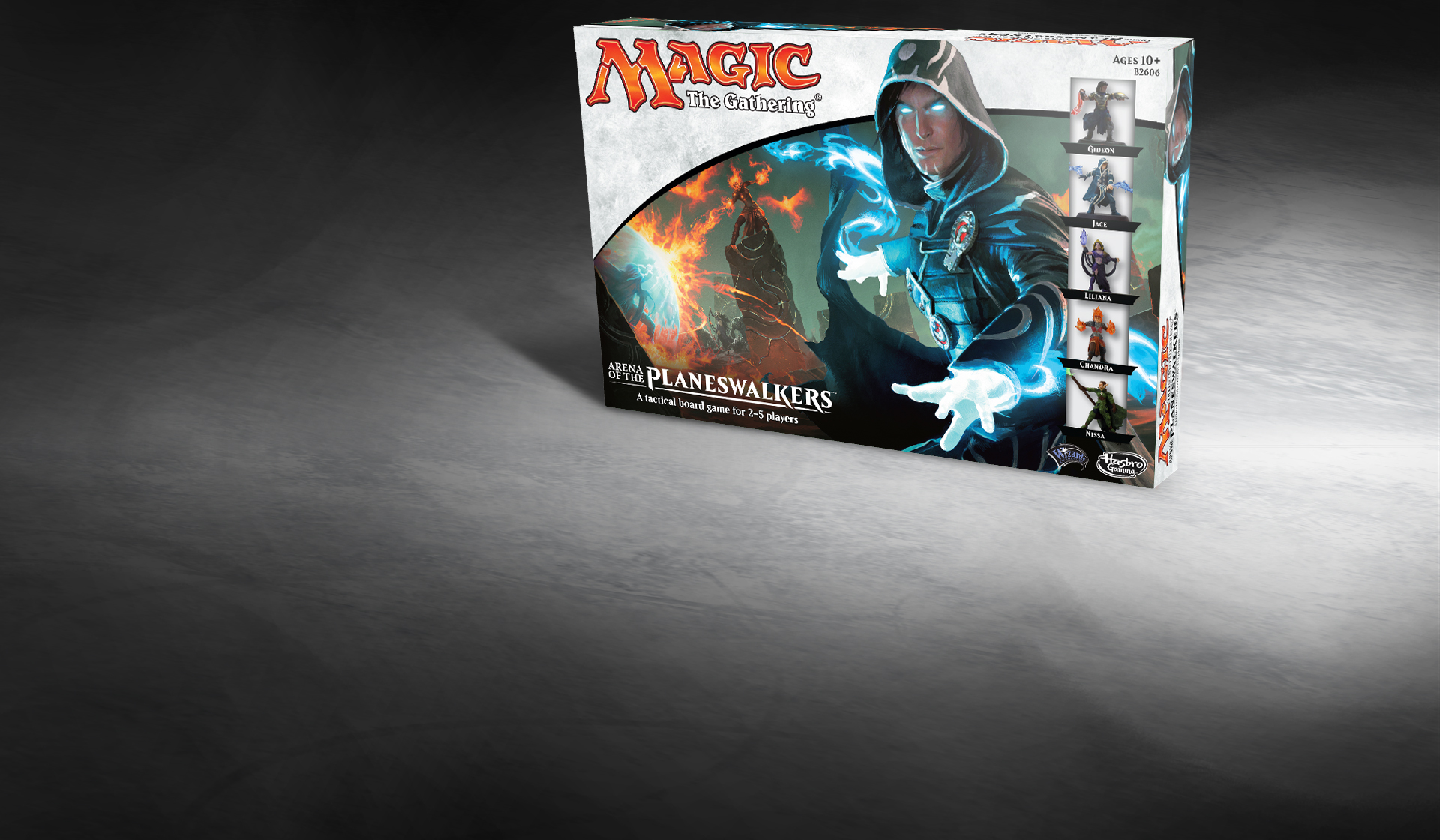 Arena of the Planeswalkers Gameplay Details

In Arena of the Planeswalkers, stalwart Rhox soldiers, swift-moving Elves, illusionary creatures, and mighty elementals all come to battle in the first-ever board game set in the Magic: The Gathering Multiverse. You play the role of one of five Planeswalkers, powerful mages battling for supremacy. Each of the Planeswalkers has a unique set of spells and allies to call to the conflict. Will you be Chandra, furious and incendiary? Or are you Jace, controlling the battlefield with spells and movements of others? Step into the Arena to test your strategies against friends and enemies. The last Planeswalker standing wins!

Arena of the Planeswalkers (AOP) is a miniatures-based war game where you summon dangerous creatures and cast powerful spells to defeat your opponents. You play as an iconic Planeswalker seeking to destroy the enemy Planeswalkers across a variety of battlefields with a multitude of objectives. The battlefield layout itself determines which areas are valuable and which will quickly become hotly contested. You'll even see some familiar mechanics from Magic: The Gathering reimagined for three dimensions, such as haste, lifelink, and flying. You need to play smart and think ahead to win in the lethal Arena of the Planeswalkers.

Over the next two weeks, we'll be revealing details of each of the five armies available in AOP. Get ready to pick sides, rally your armies, and dust off your spells–the Arena is about to open its gates! 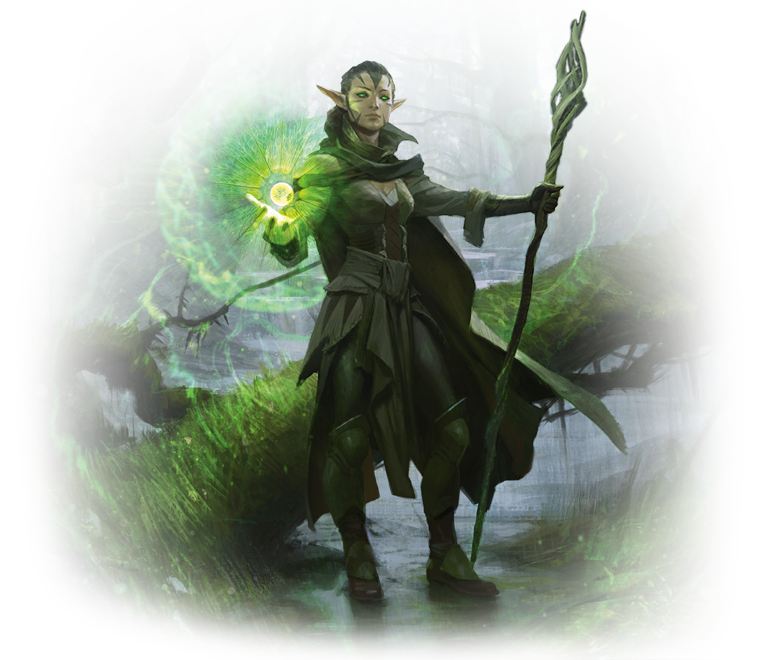 Green is the color of natural forces and survival instincts. Green spells can bestow incredible power on its army, from healing to big, temporary stat boosts.

Titanic Growth almost always leaves a dent in your opponent's army. Use it liberally when the opportunity arises as a great green combat trick.

One of the cards that makes Nissa so tricky to pin down is Nissa's Expedition. This card protects Nissa as she flees from close-range combat by bestowing Disengage and also grants additional movement allowing you to reposition far, far away from enemy forces.

Primeval Light is the equalizing force when you need to shred all of those pesky enchantments from friends and foes. It even removes dangerous enemy hidden enchantments from play, bringing some much needed tranquility. 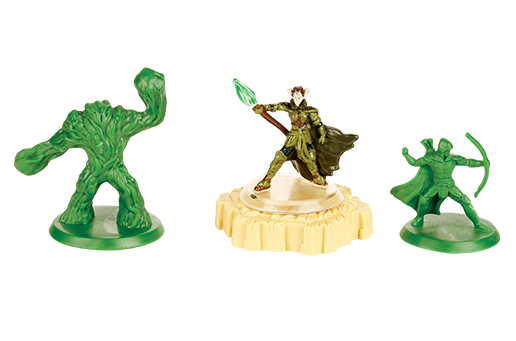 Nissa Revane, Animist, is an agile planeswalker with a long Range and additional movement at the end of her turn. Unlike some ranged Planeswalkers, Nissa is also very capable in close combat. Relatively high life and maneuverability can make her a challenging foe to corner. 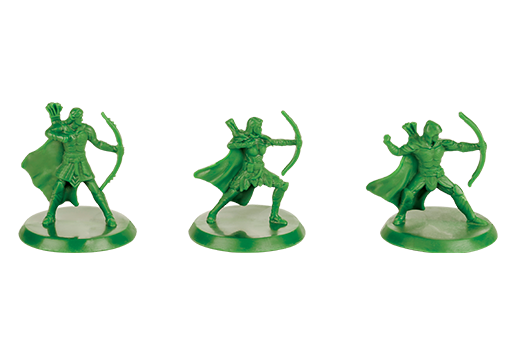 Elf Rangers are a ranged squad with movement that gives them a very shoot-and-scoot feel. Keep your distance from your quarry and you'll make quick work of it. 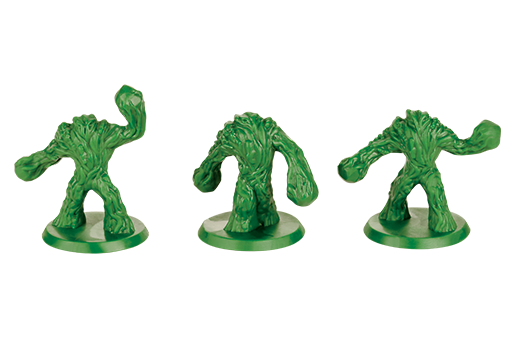 Pummelroot Elementals are the hardest-hitting squad in Arena of the Planeswalkers. Combined with green spells that push their combat effectiveness even further, the Pummelroot squad's bark is one of the worst bites in the game. 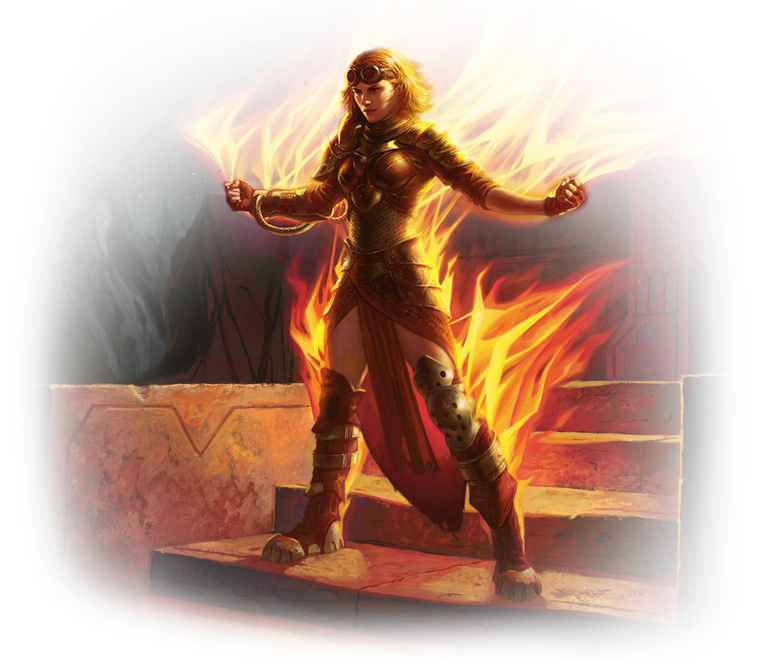 Red is the color of passion and fury. Red creatures have low life but are full of offensive potential, and the red spell deck can quickly burn through opposing creatures that are in range.

A great spell for an ambush attack, Twinflame doubles the hits of each well-rolled punch this turn.

Firebreathing is a straightforward red Power-buffing enchantment. As an enchantment, it will stay active until affected by another spell or until all of the enchanted squad's creatures are destroyed.

Dual Casting effectively doubles the firepower of any spell card in your hand. When combined with other potent red sorceries, is an enemy tactician's nightmare. Get ready to fight fire with even more fire! 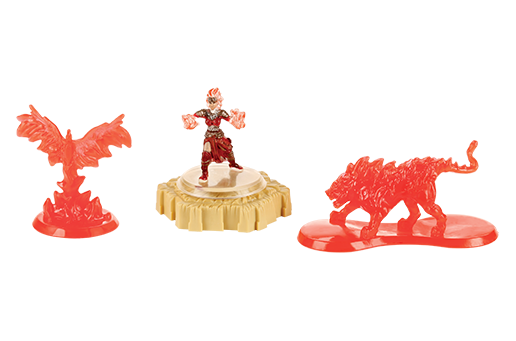 Chandra Nalaar, Pyromancer, is a planeswalker with some explosive offensive potential. While Gideon can hold his own in the midst of combat, Chandra is happy to deal damage from a safe distance. Twice. 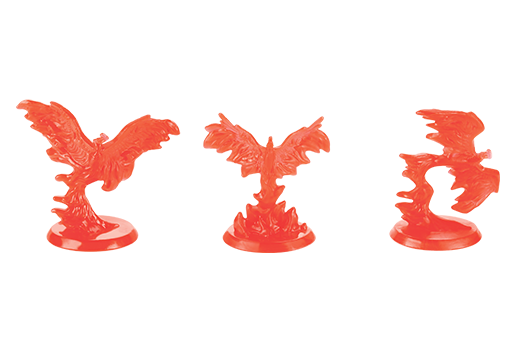 While not overly powerful in combat, Flamewing Phoenixes use their Flying ability to cross over ruins and terrain quickly, and with the right spell casting, their Rebirth ability can make them a steady danger to wounded enemies. 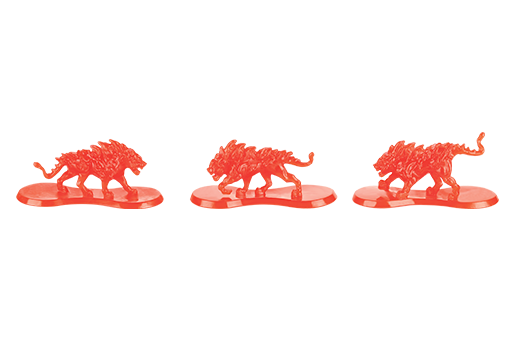 Blazing Firecats come out swinging with Haste, have the highest movement value of any squad, and take big bites out of your opponents with Intense Strike. These deadly felines can start fights and end them. 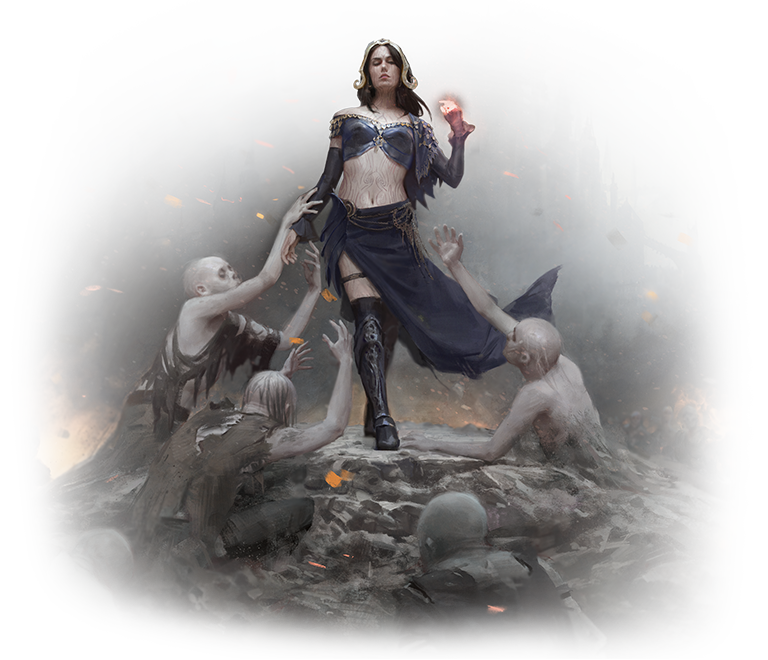 Black is the color of power and sacrifice. Black spells can deal fantastic amounts of damage–if you are willing to accept some collateral losses.

Planeswalkers can do a lot of damage if left unchecked. Consider Despise as a countermeasure when one is giving you grief.

A sacrifice is an acceptable price to pay to make a squad twice as deadly with Dark Harvest.

Sometimes your opponents can get the better of one of your squad creatures. Rise of the Dark Realms reminds them that your zombies are no strangers to second chances. 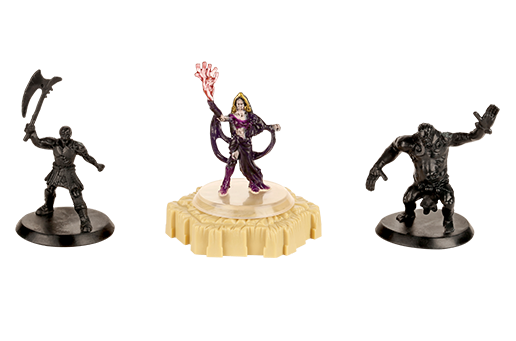 Liliana Vess, Necromancer, is the planeswalker of choice for those players who love to toughen allies, weaken foes, and Snuff Out wounded squad creatures. 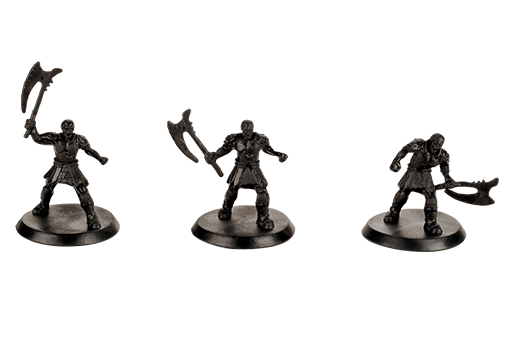 Restless Zombies fight, die, and fight again with their Darkness Rises ability. This squad is great for soaking up enemy spells. 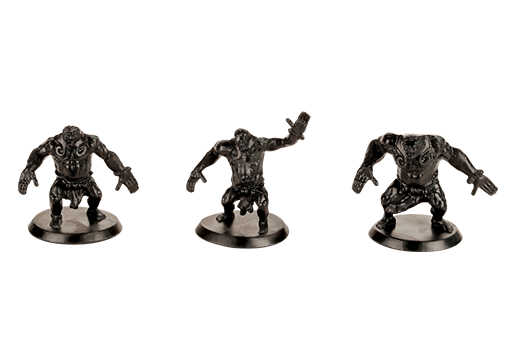 If your problem is creatures with solid defense, Blighted Reavers are your solution. Necrotic Stench softens even the toughest creatures for a winning combat roll. 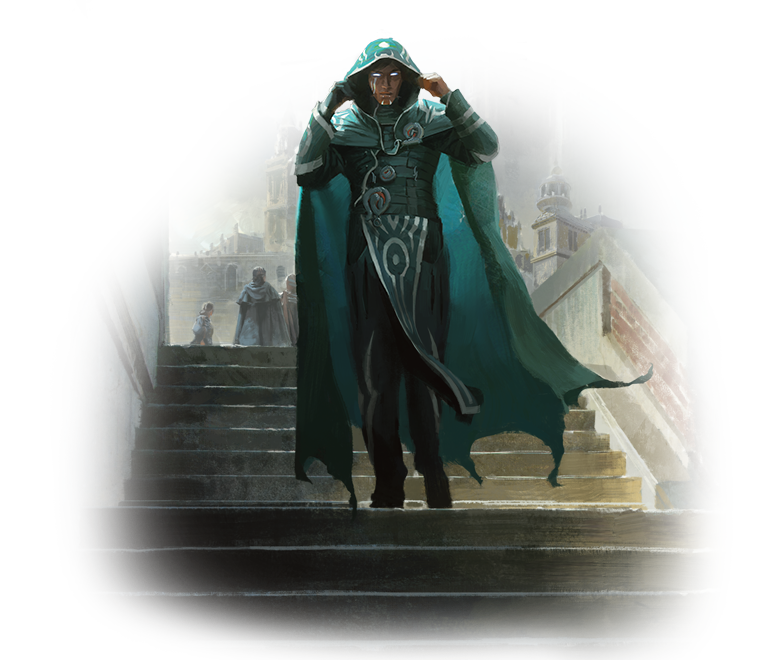 Blue is the color of knowledge and control. Blue players have a variety of tricks available to them, allowing them to deceive their opponents and manipulate the battlefield to their advantage.

A key card in a deck of tricks and illusions, Selective Memory finds the answer you need and puts it into your hand.

Unsummon can be used offensively to clear a path for your army or defensively to boomerang a squad to your reserve, allowing you to play it again to protect your planeswalker.

Talent of the Telepath–Blue loves a good sorcery. No matter who played it first. This card lets you take a sorcery from any players' graveyard and play it as their own. You can play your favorite blue spell again or steal an enemy spell and use it against them! 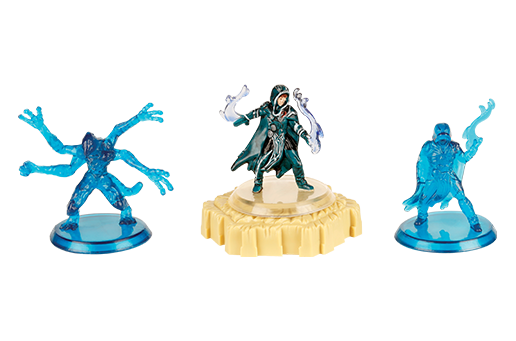 Jace Beleren, Mind Mage, is the telepathic blue planeswalker. He's got high power and a long range to threaten enemies from afar, and his Mind Stealer ability makes other Planeswalkers reluctant to close in on him. 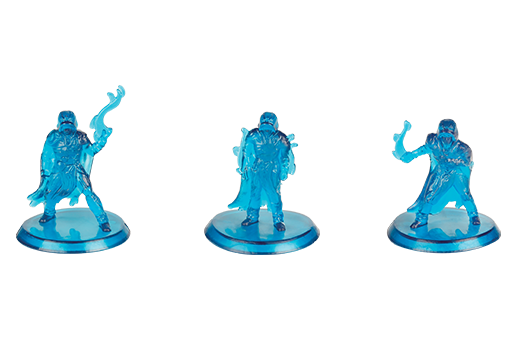 Illusionary Projections are tricky creatures that can exchange positions with Jace by casting their Illusionary Deception ability. This squad's utility makes it a strong complement to any blue Planeswalker's army. 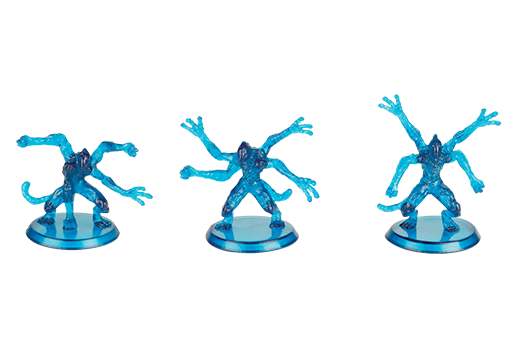 Leyline Phantoms, with their high base toughness and Phantom Walk ability, are creatures that opponents cannot ignore. It is a quick death indeed for any planeswalker within this squad's reach. 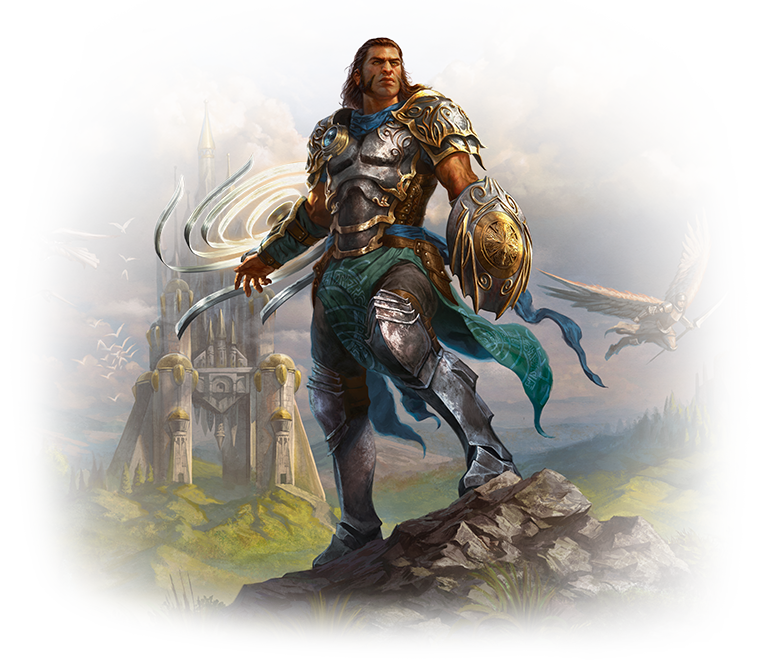 White is the color of order and protection. White encourages your figures to stay near each other to improve their combat capabilities.

Battlewise Valor is one of white's enchantments that can be used to toughen a squad–and as a hidden enchantment, your opponent doesn't know about the effect until it's too late.

Swift Justice is a take on a lifelink sorcery in AOP. Damage is a persistent effect in AOP, and lifelink will allow your creatures to earn some life back in the crucible of conflict.

Healing Salve is a classic Magic card reimagined as a direct sorcery life-gain spell with a card drawing effect as well. This ability is a white staple of keeping your creatures healthy and able to stay in the fight. 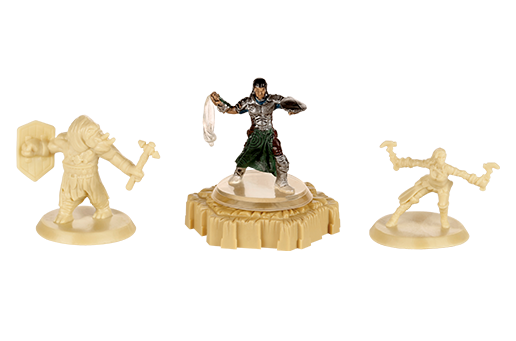 Gideon Jura, Combat Mage, is our white planeswalker in Arena of the Planeswalkers (AOP) and he stands tall with the highest toughness among our planeswalkers. 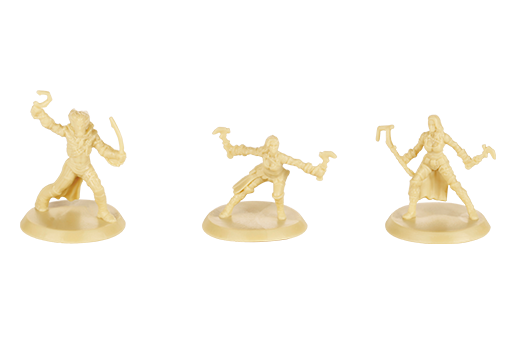 Kor Hookmasters have a medium-range attack and can delay creatures for a turn with Detain when they come into play. 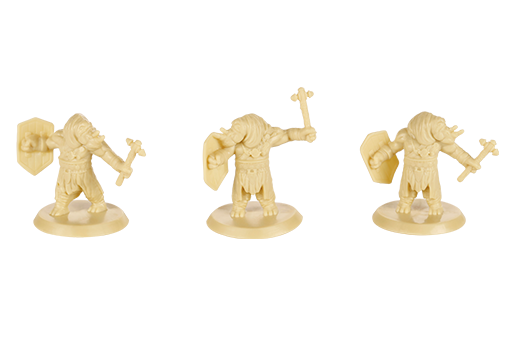 Rhox Veterans are bulky and do best when they stand together. This squad makes a solid front, either in the vanguard or protecting important areas of the board.