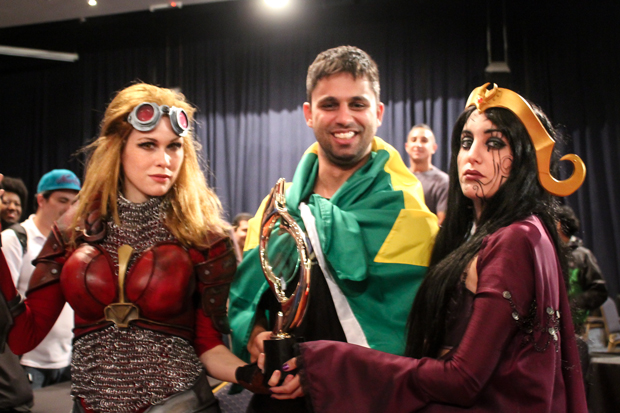 his isn't the first time that Brazil and Argentina have gone head-to-head in the finals of a Grand Prix. This rivalry has been alive in sports for decades, and it is no surprise to see the same fervor and excitement over a match-up between a Brazilian and an Argentinian culminate in the Finals of Grand Prix Buenos Aires 2014. However, despite Buenos Aires resident Demian Tejo's best efforts to keep the trophy at home, it was ultimately Philippe Monlevade, from Rio de Janeiro, who took home the trophy.

Philippe Monlevade's Jund Monsters deck went on a rampage through the Top 8, where he first dispatched Mateus Dos Anjos and his Mono-Blue Devotion in the Quarterfinals. After that, he battled his way past Hall of Famer and fellow countryman Paulo Vitor Damo da Rosa and his Esper Control deck in the Semifinals. It was then that he was paired against Tejo in an electric final match, with Monlevade's Miscutter Hydras leaving Tejo's Mono-Blue Devotion deck out to dry. Monlevade's victory in Buenos Aires marks the second time that Brazil has taken the trophy home from an Argentinian Grand Prix, further fueling this long-standing rivalry between two great nations.

Grand Prix Buenos Aires 2014 was the stage for showing just how passionate the South American Magic community can be. From country rivalries, to team support and a wide representation of South America's finest Magic players, to the record-breaking attendance of 884, it has been an incredible weekend. While it is Monlevade and Brazil that celebrates today, the community in South America continues to expand, and as it does, so does the competition and the chance for Argentina and the rest of South America to shine.

3 Chained to the Rocks 1 Blind Obedience