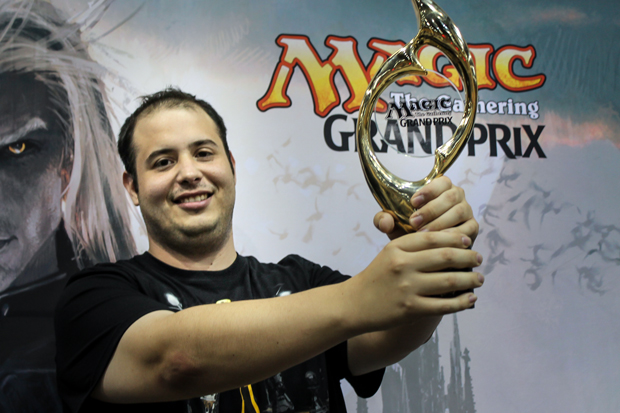 ustin, Texas resident Robert Berni got his first opportunity at nearly achieving a Grand Prix title back in July of 2013, where he reached the Top 8 of Grand Prix Kansas City. However, his hopes of a win were shut down by Seth Manfield that day, the eventual winner of the event.

Today, however, was a different story. Overcoming a field of 1463 players, Berni's Mono-Black Devotion deck earned him win after win through two Days of Standard action before he finally cemented his place in the Top 8 at the top of the standings. Once he reached the Top 8, he had to overcome three different archetypes in order to claim the title. In the Quarterfinals, he dispatched Daniel Ward, the sole Bant Control player in the Top 8. In the Semifinals, he overcame William Levin's Jund Monsters.

And then, it all came down to his final match against Nathan Holiday, who was looking to add a second Grand Prix title to his name. However, it was not to be for Holiday, and Berni's Nightveil Specters utterly devastated his opponent in the third and final game, stealing not one, not two, but three of Holiday's own copies of the creature off of the top of his deck in sequential attacks.

While the Standard format has evolved with each week in the last four Grand Prix main events, it was ultimately the more traditional Black and Blue Devotion decks that found their way into the final match of the weekend. And, much like the last few months have played out, it was black that managed to rise above its devoted rival. And for Robert Berni, it was a chance to finally claim a title for his own, after his first title eluded him last year.

4 Master of Waves 1 Ephara, God of the Polis 2 Bident of Thassa 2 Domestication

4 Master of Waves 4 Thassa, God of the Sea 2 Jace, Architect of Thought
76 Cards