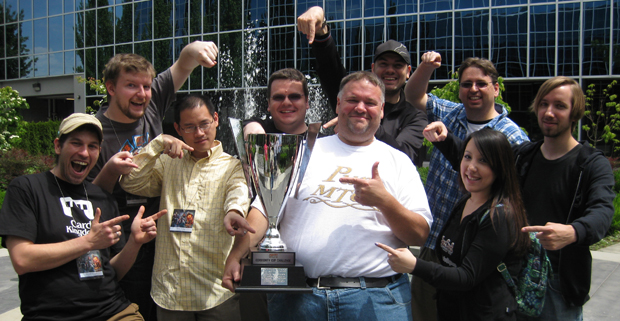 Congratulations to the Magic Online Community Team, victors in this year's Community Cup. A strong showing in Standard on Friday slammed the door on any hopes of a Wizards comeback, meaning the Erik "Hamtastic" Friborg Memorial Trophy stays in the hands of the Community!

With the win, the Community Team earned a special no-entry-requirement Planeswalker-format Constructed tournament on July 3 open to all players who logged on to Magic Online any time from Wednesday, June 15 through Friday, June 17! All players who play in this four-round, Swiss-pairings event will receive one Magic 2011 booster pack. All players who earn 12 match points by going undefeated will also receive any three Magic Online booster packs of their choice—yes, any three!

If you'd like to be a part of future Magic Online Community Cups, get active in your Magic community and perhaps we'll see you here next year...where you'll surely suffer a humiliating defeat at the hands of Wizards of the Coast! Mark our words, 2012 is our year!

2 Disfigure 3 Go for the Throat

2 Go for the Throat 2 Dismember