The Community Team took an early lead, and never looked back at the 2013 Magic Online Community Cup – ultimately crushing the Wizards Team 233-201.

The 2013 Community Team did the Magic Online Community proud, earning not only bragging rights, but also granting every Magic Online player who logged in between Friday, August 30, at 10 a.m. PDT and Saturday, August 31, at 7 p.m. PDT, during the Community Cup a premium foil Sliver Queen promo and a Rakdos Cackler FNM promo.

Unlike in individual events where players must keep their thoughts to themselves, even if they have a strong opinion about what their friends should do – at the Magic Online Community Cup players are allowed to communicate with their teammates during drafts and matches.

In order to take advantage of their freedom to advise their teammates – players here are spending as much time out of their chairs, as they are in them... 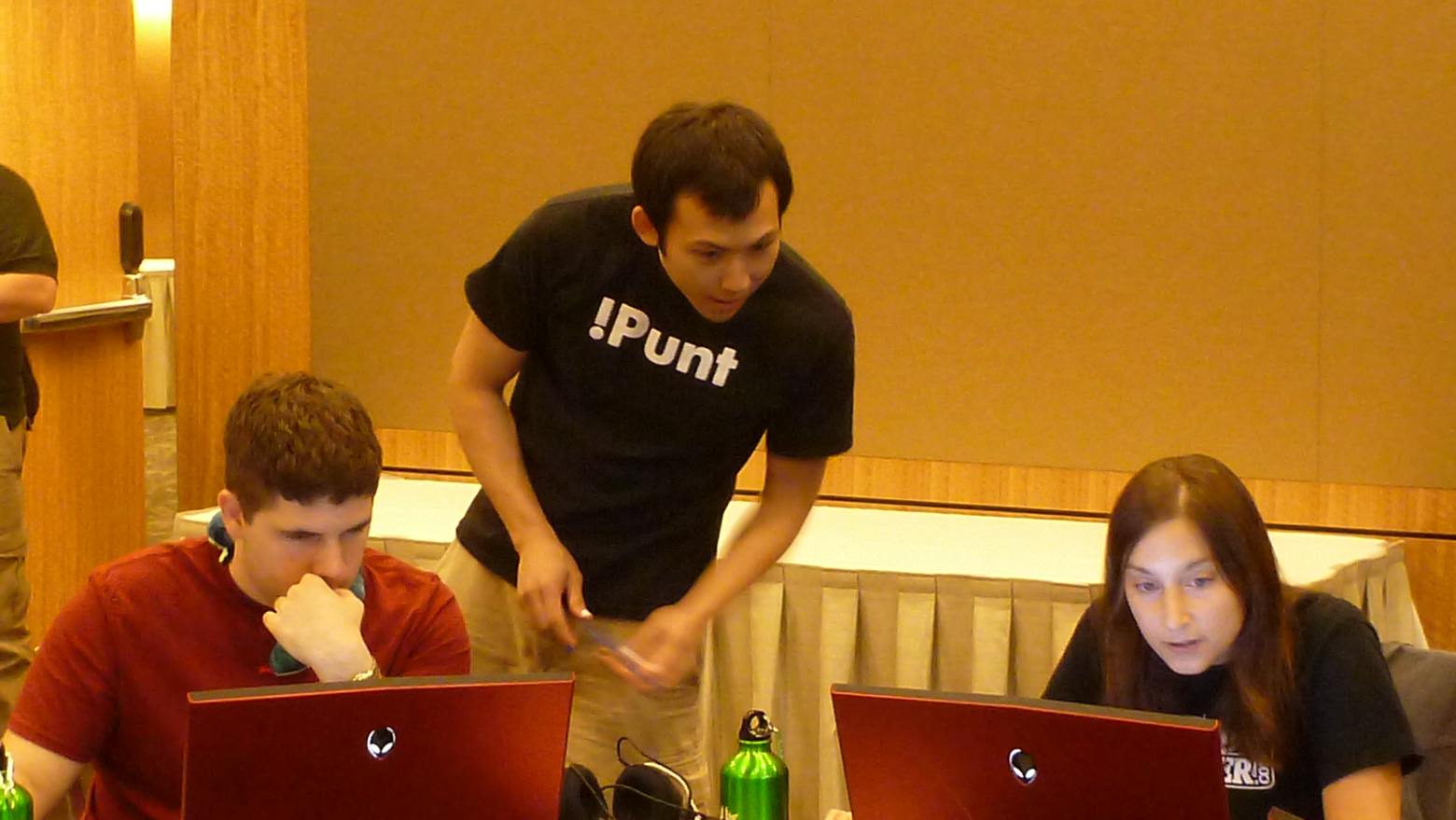 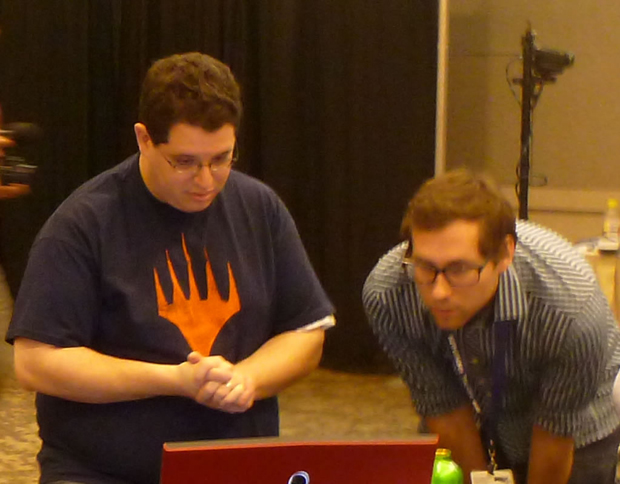 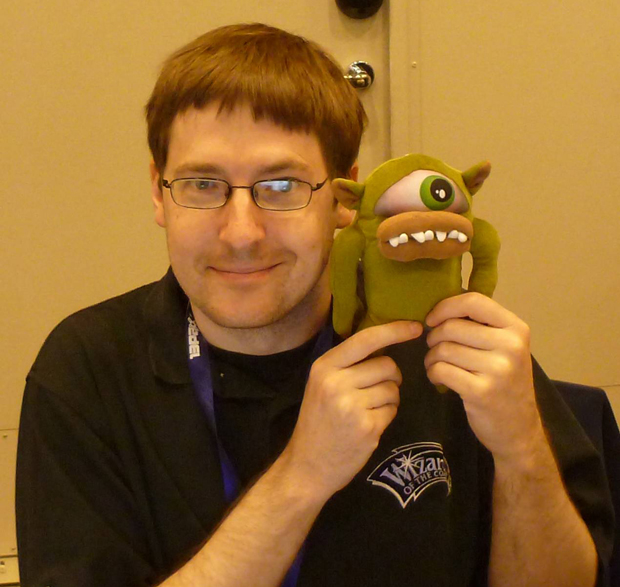 Even with the freedom to give each other advice, Fblthp and Lee Sharpe are still Totally Lost . 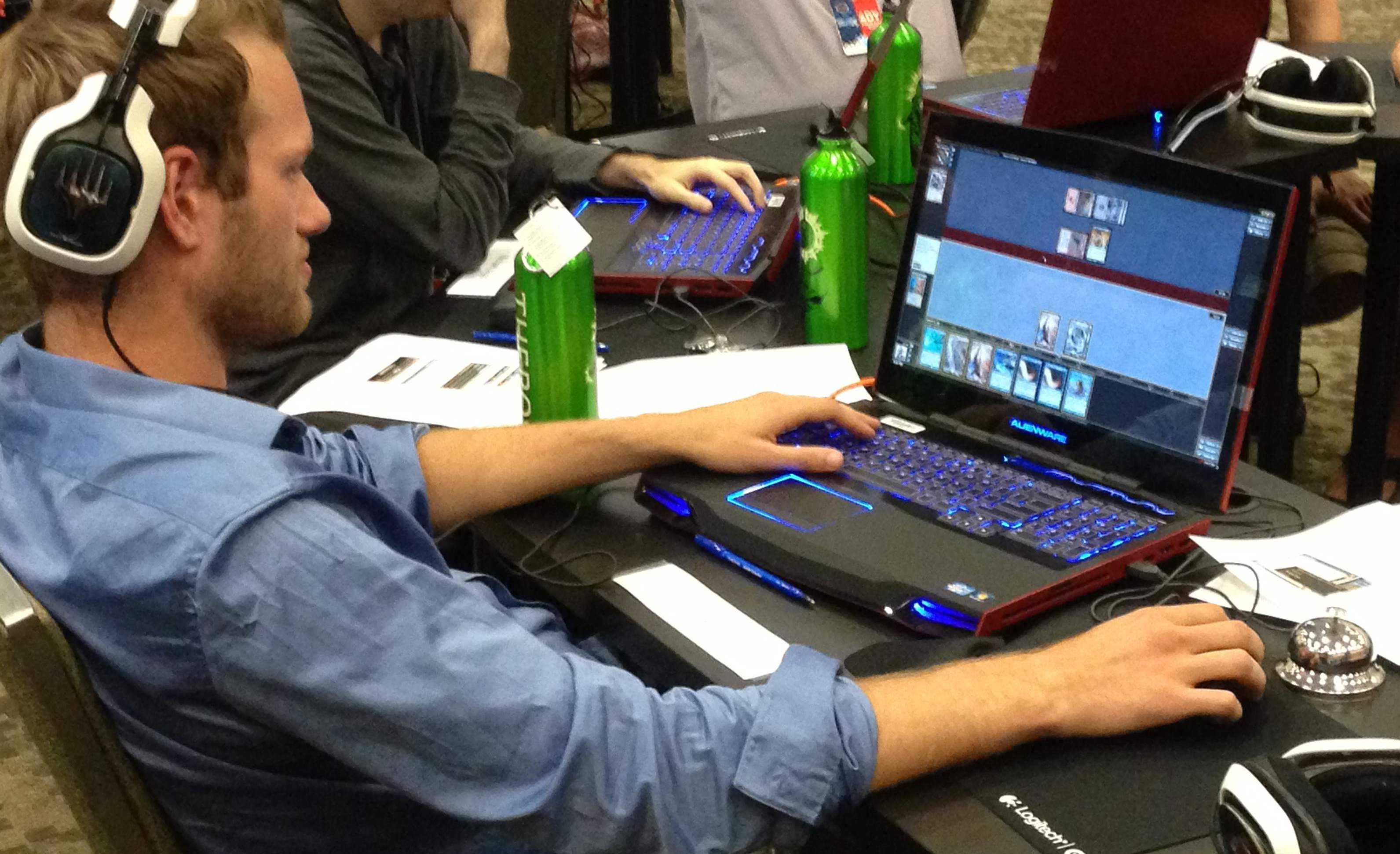 Jan van der Vegt streams Magic Online tournaments regularly at http://www.twitch.tv/dzyl/ - and, unlike most Magic streamers, Jan has a number of props that he uses on his stream. Notably, “The Bell.” 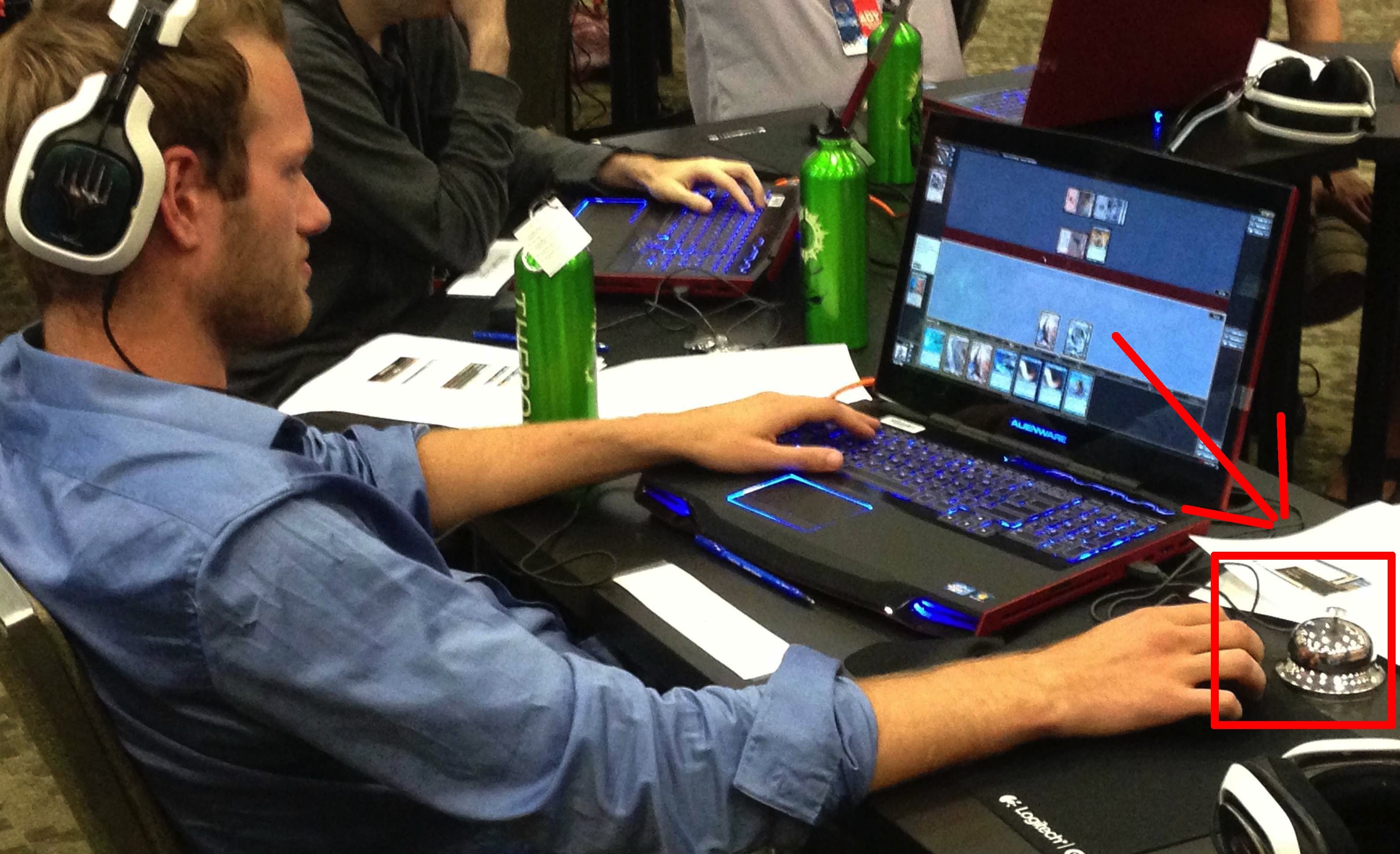 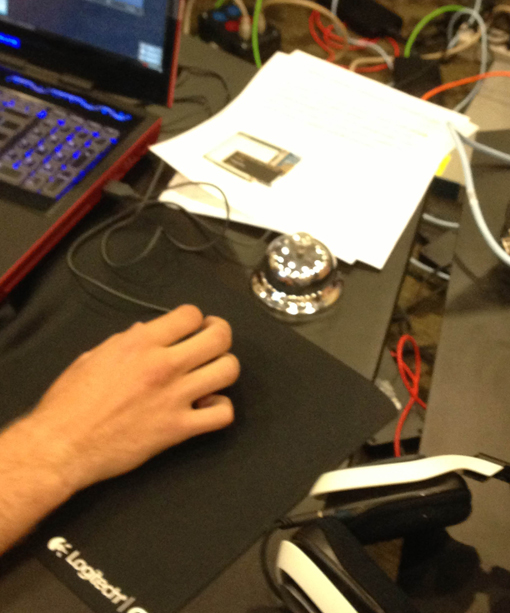 This is what it looks like when you lose to Dampen Thought with Progenitus in hand. @mtgaaron @DasDzy #mtgocc pic.twitter.com/QMUXvFJxAW 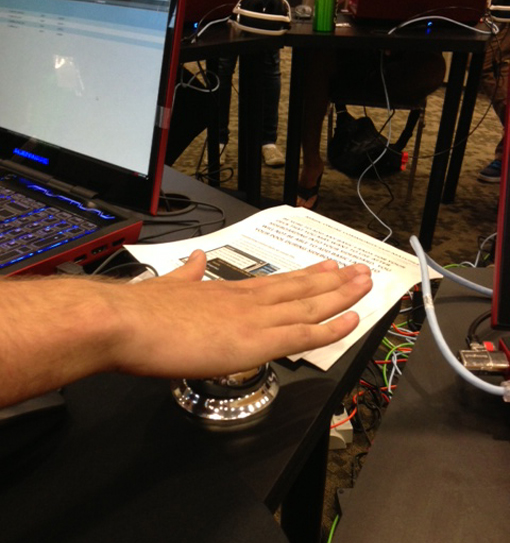 After the Community Team got off to an early 42 to 30 point lead in Modern Masters, the competitors moved on to "Wacky Draft". The Wacky Draft is done using the most recent iteration of the Magic Online Cube and each player is randomly assigned a draft stipulation that they must follow. During the draft, if a player can make a pick that fulfills the requirements of his or her draft rule, he or she must do so. If there are no cards that fulfill the draft rule, the player can draft any card in the pack.

A full list of the rules and restrictions that the players were subject to can be found here.

As a result Jan was required to "Pick the card with the name that makes the best band name". In order to ensure that these picks were not made with a bias, Jan's draft was judged by Pro Tour Historian, and band name aficionado, Brian David-Marshall. 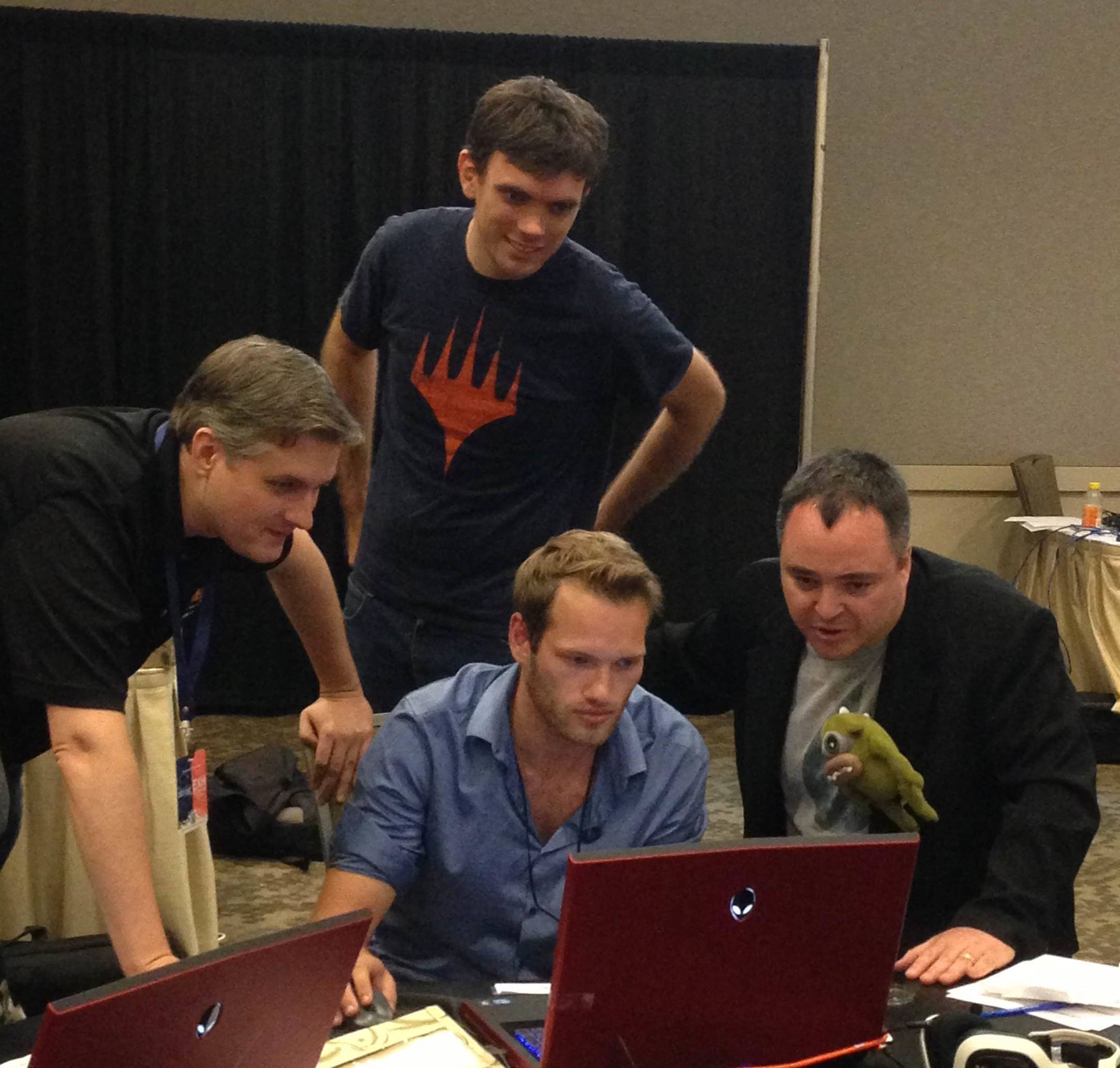 Below are some of the highlights of his draft:

In the end, Jan wound up with a (surprisingly) solid Blue-Green-Black deck that was able to make quick work of Brian Clinton's Backdrafted deck in the first round.

Friday: Bear With Me with Kenji Egashira

On January 1st, 2013 Kenji Egashira committed himself to the “Livestream Challenge” - resolving to stream Magic Online matches every day this year at http://www.twitch.tv/numotthenummy

Kenji’s well on his way to accomplishing his goal having already streamed for the first 242 days of the year. 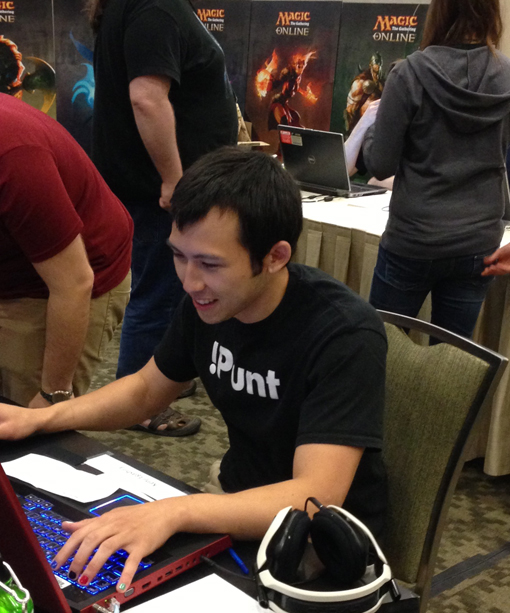 Kenji’s also well on his way to going 3-0 in the Wacky Draft with his Bear Force One Deck.

Bear Force One Rule
Must draft the card that fulfills the most of the following:
* converted mana cost 2
* 2 power
* 2 toughness
* green
* creature

I didnt want to make 'boar'ing jokes, but my bear force one deck is simply mauling the opposition. #mtgocc

I mean really, this should be called wacky CUB draft, not cube

Only one of the competitors at the 2013 Magic Online Community Cup chose to play more than 2 ingredients during the Ironroot Chef challenge: Tom @mtgradio Delia. Tom chose to fill his deck with 4 copies of each of the 5 ingredients: Goblin Test Pilot , Angelic Accord , Feed the Pack , Conjured Currency , and Strionic Resonator . 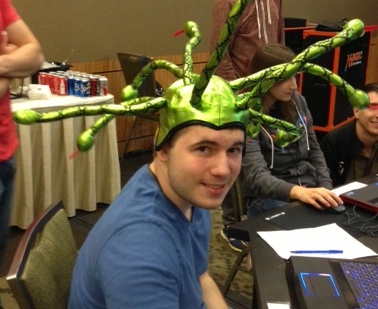 In addition to these 20 cards, Tom filled out his deck with 232 other cards to build a Battle of Wits deck.

"As soon as I learned that I could play more than two of the ingredients, I knew that I wanted to play all five. But in order to play all five of them, I was going to have to play five colors. Then I got to thinking, I could play Battle of Wins in my deck! Not only is this a lot of fun, Keya Saleh won the Texas State Championships a few years ago with Battle of Wits – so I had an expert to help me figure out my mana base."– Tom Delia

The result? A 252 card deck that has struck fear into the hearts of every member of the Wizards Team.

But is it flavorful?

The judges have yet to cast their verdict.

While they have acknowledged the fact that almost all of the pieces in the deck have synergies that work with at least one of the Ironroot Chef ingredients, there's some question as to whether or not Tom's deck has actually made proper use of those ingredients. 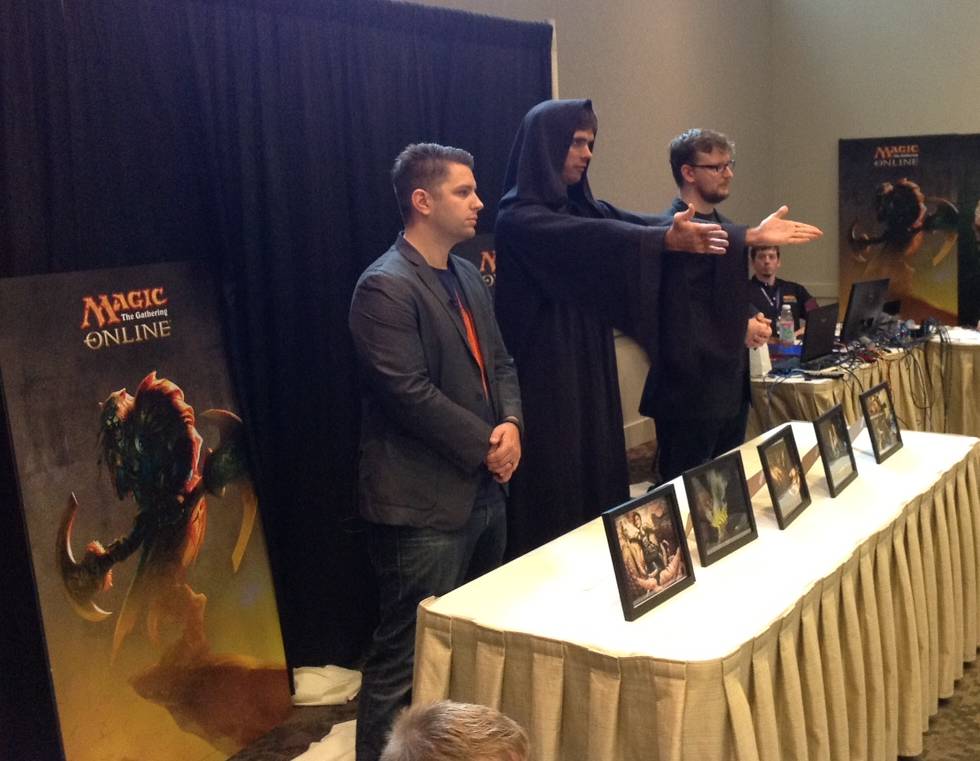 The Wizard is a harsh judge.

Will Tom's deck be able to win? Will it be deemed flavorful enough by the judges?

Stay tuned to find out.

2 Archangel of Thune 4 Angelic Accord

Saturday: Why is Lingering Souls in Your Deck?

During the Ironroot Challenge, The Wizard wandered the floor and asked the competitors to justify some of their choices.

In between the 2nd, and 3rd round – The Wizard found Sam Stoddard and asked him to explain why Lingering Souls was included in his Angelic Accord + Strionic Resonator deck. 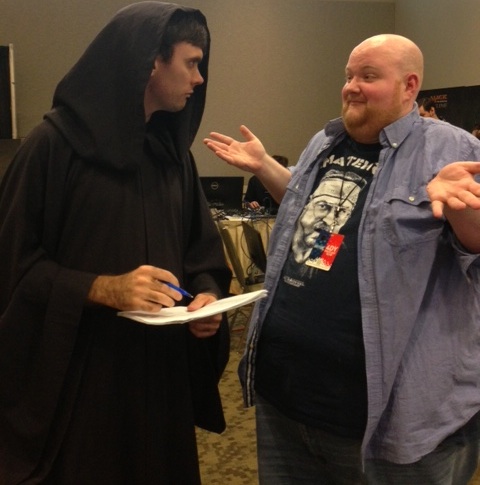 Sam Stoddard: "Well, do you know Bogbrew Witch ?"
TW: "Yes, I know her personally. We have tea sometimes. It's not very good tea, but it's still tea."
SS: "Well, then you know about the time when she massacred her family... then resurrected them, and massacred them again."
TW: "Ah yes, of course. It was a very difficult time in her life."
SS: "Well, the souls of her family still linger and haunt her to this day."

Director of R&D Aaron Forsythe has been having a tough time this weekend. After winning his very first match on Friday by Tooth and Nail ing in Progenitus – Aaron has gone winless through his next 7 rounds.

Alright, I'm 1-7 this weekend. I'm making a list of all the mistakes I've made, steeling myself for a long road back to the Community Cup.

But just when things were starting to look really grim for Aaron, Community Team member Jan van der Vegt took pity on him...

...and brought him ice cream! 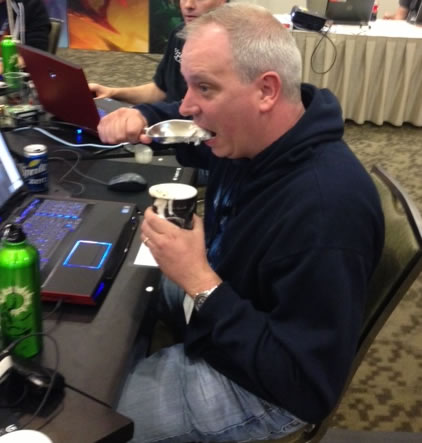