The second semifinals at the 2017 World Championship was between Javier Dominguez, the all-time Pro Points leader in Spain, and Josh Utter-Leyton, the Pro Tour Hall of Fame-elect who will be inducted at Pro Tour Ixalan in November.

For Dominguez, who received his World Championship invite as one of this season's top Pro Point earners, this Top 4 marked his first Final Day appearance. Although he had finished 9th at the Pro Tour on tiebreakers twice already, he was still looking for his first Pro Tour Top 8, so when he made it to the Top 4 of this World Championship, he felt like he finally did it. The aggro specialist got there with Ramunap Red, which he didn't necessarily describe as the clear best deck in the format, but he felt it was the best deck for him.

Josh Utter-Leyton qualified for the World Championship as this year's Magic Online Champion. For many years, he was known as the driving force behind the decks of team ChannelFireball. With 401 lifetime pro points, lifetime earnings of $256,125, and five Pro Tour Top 8s to his name, he already had a lot of success in Magic, but the title of World Champion had eluded him so far. For this Top 4, Utter-Leyton received surprise support from his mom Barbara, who flew in this morning on a red-eye flight from California to cheer him on.

As far as the matchup was concerned, Dominguez looked like a small favorite. He had already defeated Utter-Leyton in yesterday's Standard rounds, and his Ramunap Red had the capability to go under Utter-Leyton's slower Blue-Black deck. In particular, Search for Azcanta, which Utter-Leyton's team identified as one of the most powerful Ixalan cards for a control shell, would be a little slow in this matchup. Yet, Utter-Leyton had access to life gain spells in Vraska's Contempt and Essence Extraction, and Dominguez had multiple nearly dead removal spells in his main deck, so it could go either way. 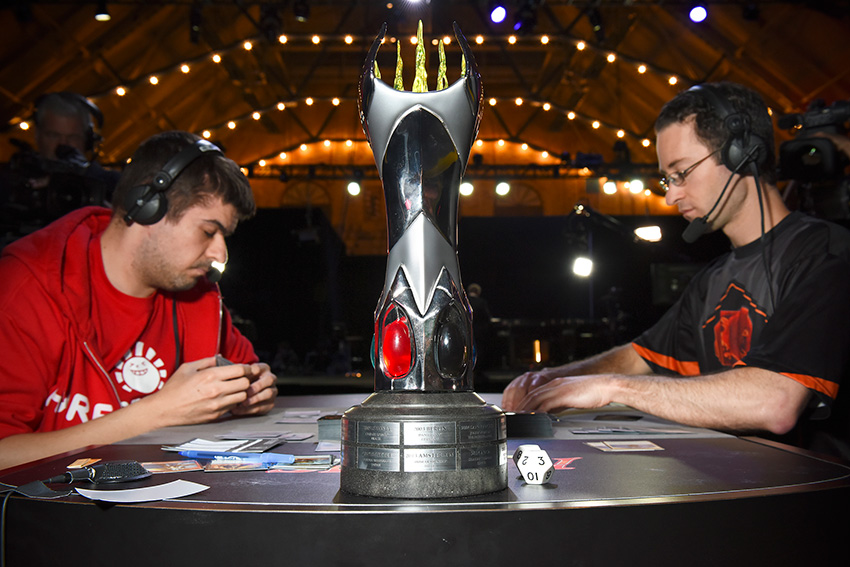 Javier Dominguez and Josh Utter-Leyton go head to head in the second finals of the 2017 Magic: The Gathering World Championship.

In Game 1, the early turns involved threats from Dominguez and answers from Utter-Leyton: Bomat Courier died to Fatal Push, Kari Zev, Skyship Raider fell to Essence Scatter, and Hazoret the Fervent was also countered by Essence Scatter. Even Ramunap Ruins was destroyed by Field of Ruin. For Utter-Leyton, this was exactly the way he was hoping the game to go. If he could keep the board clear and enter the late-game with a double-digit life total, then his powerful creatures and card-draw spells could take over in the late game.

Soul-[autocard]Scar Mage[/autocard] had slipped through the cracks, though. Combined with a Lightning Strike, Dominguez got Utter-Leyton down to 11 life by turn five, and he also resolved Kari Zev, Skyship Raider. Facing a 1/2 and a 1/3 at 11 life, Utter-Leyton felt safe enough to tap out for The Scarab God, but this allowed Dominguez to resolve his last card: Hazoret the Fervent, arguably the most powerful card in his deck. The subsequent attack got Utter-Leyton down to 3 life. Without a Vraska's Contempt to answer the red God, Utter-Leyton was in a lot of trouble. A simple Shock from Dominguez was enough to close the game in the Spaniard's favor.

In Game 2, Dominguez got in the mode of setting up a large mail bags with double Bomat Couriers, while Utter-Leyton merely cycled a few instants to set up his draws. His hand contained two copies of Vraska's Contempt in hand, which would've been perfect answers to Hazoret the Fervent, but they wouldn't trade for Dominguez's early drops at a favorable mana point. 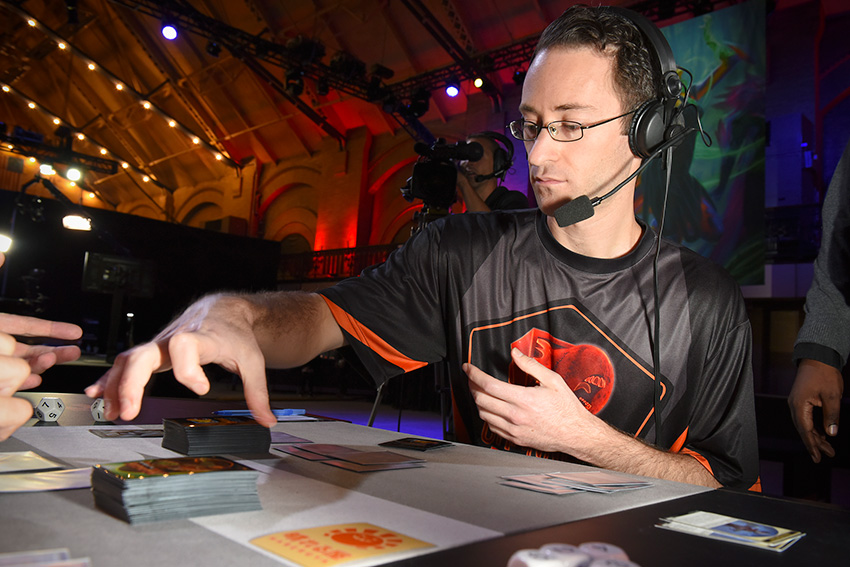 Utter-Leyton's been in this seat before, as he tries to get through the semifinals after his last Worlds Sunday appearance in 2013.

When Utter-Leyton targeted Kari Zev, Skyship Raider with Vraska's Contempt, Dominguez even denied the two points of life by using Abrade on his own creature in response. A burn spell and additional attacks by the pair of Bomat Couriers got Utter-Leyton down to 6 life. When Utter-Leyton deployed The Scarab God as a blocker, Dominguez revealed that the last two cards in his hand were Lightning Strike and Ahn-Crop Crasher, and the game was his.

As the players reached for their sideboards, Utter-Leyton was two games down and had his back against the wall. What's more, sideboarding actually favored Dominguez, as he got to replace his ineffectual burn spells for additional threats: He took out 4 Shock, 4 Abrade, and a few copies of Lightning Strike and Soul-[autocard]Scar Mage[/autocard] for Rampaging Ferocidon, Pia Nalaar, Glorybringer, and Chandra, Torch of Defiance. Utter-Leyton, in the meantime, could only make a small change: 3 Search for Azcanta and 1 Glimmer of Genius went out; 3 Contraband Kingpin and 1 Essence Extraction came in.

In Game 3, Utter-Leyton had the start he needed: He kept the board clear and stayed at 20 life, but when Dominguez hit his fourth land, the Spaniard wisely played around the Essence Scatter that Utter-Leyton by casting Chandra, Torch of Defiance instead of Hazoret the Fervent.

Utter-Leyton was unable to answer the Planeswalker in a clean way. The best he could do was deploy Torrential Gearhulk, attack Chandra, and hope for the best. 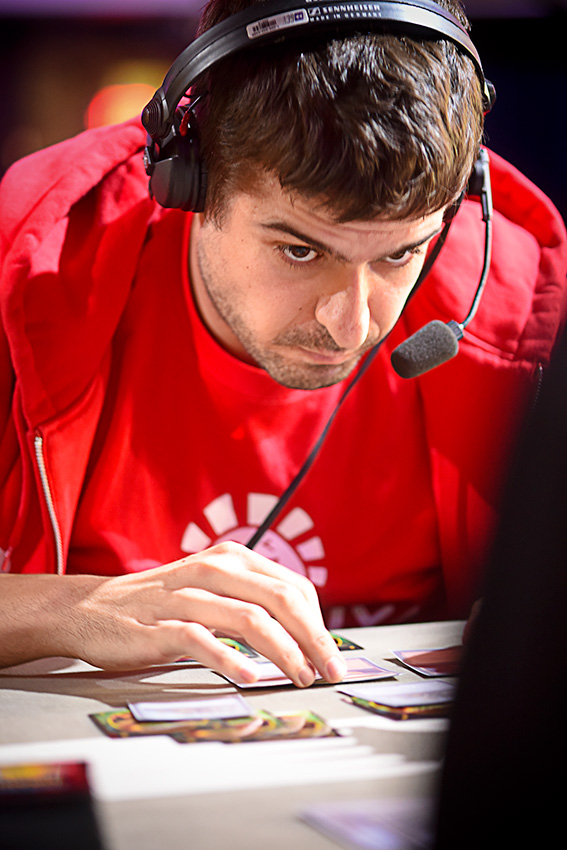 After two 9th place finishes at Pro Tours, Dominguez has his eyes set on his first title after breaking through to Sunday at the World Championship.

But Dominguez chump blocked for a turn and still had plenty of threats left in hand. With six lands on the battlefield and a hand consisting of two Hazoret and one Glorybringer, he opted to cast Glorybringer, possibly in the expectation that Utter-Leyton had no countermagic remaining. As it turned out, Utter-Leyton had Essence Scatter, so it would have worked out better if Dominguez had planned to cast double Hazoret that turn. But Dominguez was still in a good position, as now Utter-Leyton's hand was truly empty.

Torrential Gearhulk attacked Chandra down to two loyalty, and Hazoret resolved on the next turn. With Utter-Leyton at a virtual 13 life, Dominguez chose to go on the offense rather than protect Chandra. This was a wise decision. It left Utter-Leyton, now at 8 life with no relevant cards in hand, in a position where he couldn't even afford to attack Chandra with his Gearhulk.

The Gearhulk had to stay back as a blocker for Hazoret, but this meant that Dominguez could deal 4 damage per turn via his God's and Planeswalker's activated abilities. Perilously close to death, Utter-Leyton needed to find Vraska's Contempt on the top of his deck, but he only found a Swamp. As the final Hazoret activation of the game was placed on the stack, Utter-Leyton extended his hand in defeat.

Elatedly, Dominguez let out a big sigh of relief as the realization dawned on him that he had taken the match with a clean 3-0 sweep and that he had advanced to the finals.

Javier Dominguez defeats Josh Utter-Leyton 3-0 and advances to the finals!