With two more rounds of Standard to go until the cut to Top 4, Josh Utter-Leyton and Javier Dominguez were both near the top of the standings with 8-4 and 7-5 records respectively, ut they still needed to win at least one more match to make it to the Sunday competition. We couldn't quite peg their match as a definite win-and-in, as this still depended on tiebreaks and other tables, but the players surely felt the pressure as if it was.

Hall of Fame-elect Josh Utter-Leyton's resume includes five Pro Tour Top 8s, and he was the deckbuilding mastermind behind team ChannelFireball for several years. He had played several World Championships before, and he loved the event. "This is by far my favorite Magic tournament to play in, and this is why I competed as long as I did. The first year I missed Worlds was the breaking point where I felt like he needed to move on." Although he wasn't as dedicated to Magic this season as he had once been, Utter-Leyton still showed why he's one of the best players all-time when he won this year's Magic Online Championship, earning another World Championship invitation in the process.

No. 17 Javier Dominguez, one of Spain's most consistent players and a multi-year team captain for Spain in the World Magic Cup, had an excellent season involving a Grand Prix win, several deep Pro Tour finishes, and a 9th place finish at Pro Tour Hour of Devastation in particular. The Platinum Pro doesn't solely focus on competitive Magic—he also enjoys Commander, Cube, and retro 90s video games—but he is currently a full-time Magic player who tries to play as many European Grand Prix tournaments as possible. This was his first World Championship, so he was trying not to let the nerves get to him. 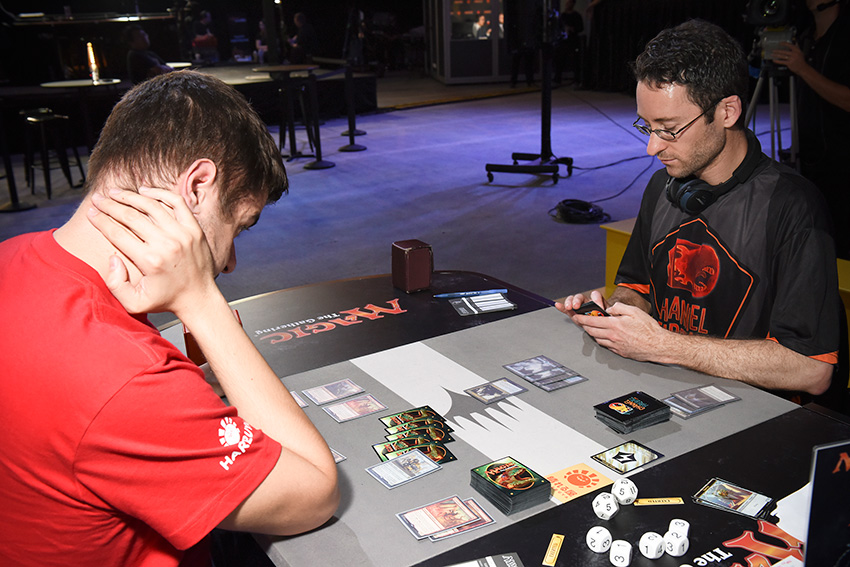 Javier Dominguez and Josh Utter-Leyton face off. While Dominguez needs two wins for his shot at the Top 4, Utter-Leyton's hoping for just one more to ensure high chances.

The matchup was between Utter-Leyton's Blue-Black Control and Dominguez's Ramunap Red. Utter-Leyton did not feel favored in the matchup, as Ramunap Red was much faster than his deck. What's more, his Blue-Black Control deck did not have good ways of catching up if it fell behind. But the life gain from Vraska's Contempt and Essence Extraction could prove to be essential.

In Game 1, Dominguez came out of the games ablaze with a Shock to Utter-Leyton's face on turn one. That's an unusual play, but it makes sense because Utter-Leyton has no good creature targets for that burn spell and because Dominguez wanted to empty his hand quickly for Hazoret the Fervent.

Dominguez followed it up with an assortment of creatures and planeswalkers, but Utter-Leyton was just wagging the finder every turn. With an assortment of countermagic and removal spells, he didn't allow any threat to resolve or stick on the table for more than a turn.

Eventually, with Utter-Leyton still relatively safe at 13 life, The Scarab God came down. Several turns later, Utter-Leyton had added several eternals to his board, and Dominguez packed up his cards. 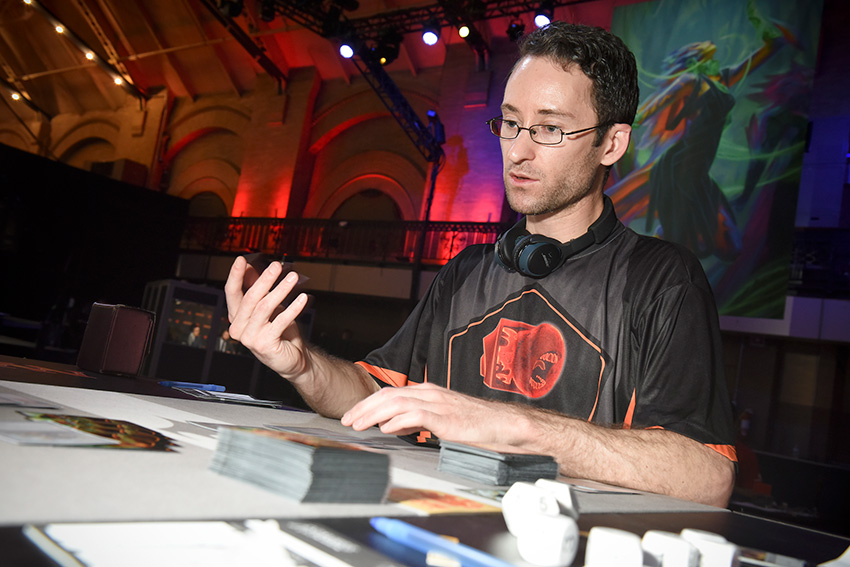 Utter-Leyton steers his way for a first-game victory.

In Game 2, Dominguez curved out with Bomat Courier and Earthshaker Khenra, but Utter-Leyton replied with one of his sideboard cards: Contraband Kingpin.

Prior to the tournament, there was a disagreement between him and his teammates Sam Black and Gerry Thompson on how good that 1/4 was. "It's very good against their cards that cost two or less but bad against their cards of three or more mana," he had told me, and those words seemed prophetic as Ahn-Crop Crasher came down on the next turn.

In the face of that three-drop, Contraband Kingpin did not look very good, as it was definitely not blocking. Having fallen to a too low life total already and without a sweeper to catch up—Essence Extraction helped, but it wasn't enough—Utter-Leyton succumbed to the hasty red creatures.

In Game 3, Utter-Leyton had a hand full of answers, as is usual for Blue-Black Control. Bomat Courier was Fatal Pushed; Kari Zev, Skyship Raider was Censored; Ahn-Crop Crasher was Essence Scattered.

But then Chandra, Torch of Defiance and Glorybringer resolved, and several turns later, Utter-Leyton had a tough call to make. 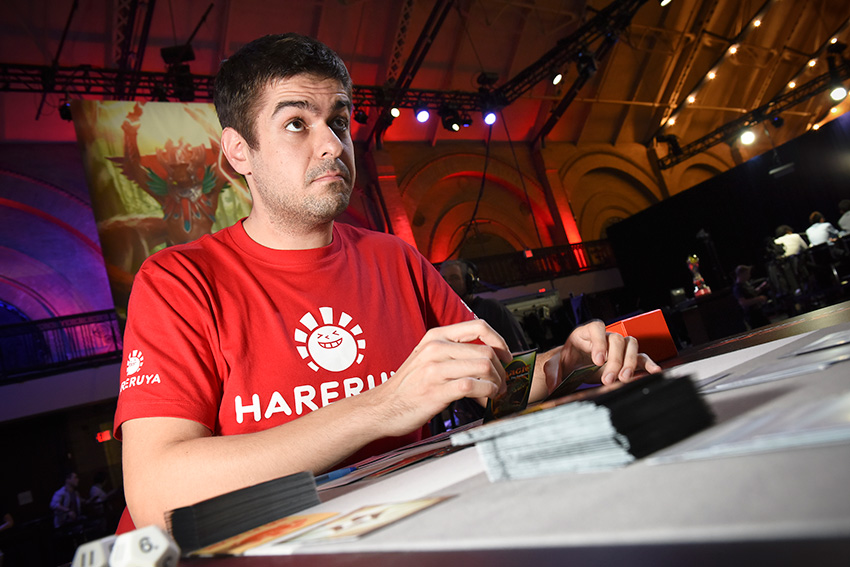 Dominguez, comfortable with red decks, sleeved up a Hazoret-fueled powerhouse for this weekend.

At 9 life, he faced Chandra, Torch of Defiance on 6 loyalty and a tapped Glorybringer. Utter-Leyton had two options. The first was to eternalize a Bomat Courier, attack, and take down Chandra. The second was to hold back The Scarab God as a blocker in case Dominguez's hand was Hazoret the Fervent and a land. After some thought, Utter-Leyton went for the first line. "I figured that if Chandra stays in play, I probably can't beat Hazoret anyway," he said after the match.

While his play was likely correct, it did not work out. Dominguez indeed had exactly Hazoret and a land in hand, and attack for lethal while Utter-Leyton was completely tapped out.