I watched a thrilling match of Magic, but some of you won't believe me. There weren't many creatures, and even when there were creatures, they often didn't get to see the battlefield. Whether they got there by the long route or the short, most of them ended up seeing the graveyard. But you don't need many creatures for great games of Magic, as Gerry Thompson and Josh Utter-Leyton just proved.

Going into the final round of Day 1 at the World Championship, Thompson was undefeated in Standard rounds. Utter-Leyton had just defeated Shota Yasooka, considered by many to be the best control player in the game, in another control mirror. A win here would mean finishing the day near the top of the standings.

Thompson won the roll. He stopped and thought about the choice ahead of him, the first of nearly countless choices he'd make in the match ahead. After a minute of shuffling, Thompson made the unusual chose to be on the draw.

The early turns were composed of card draw spells like Hieroglyphic Illumination and Glimmer of Genius, as well as the cycling of Censors. Thompson landed a Search for Azcanta, or Utter-Leyton allowed him to land it, but as soon as the enchantment flipped into Azcanta, the Sunken Ruin, Utter-Leyton destroyed it with a Field of Ruin.

"This is going to be a weird game," Thompson said.

Keep in mind this exchange happened a good ten or twelve turns into the game.

A few turns later, Thompson resolved a Torrential Gearhulk on Utter-Leyton's end step. "There's about to be damage!" Utter-Leyton told me. Sure enough, he took 5 from the Gearhulk before killing it with a Vraska's Contempt. I declined to tell them that in a control mirror, damage felt very pedestrian.

With no creatures on the battlefield, it was time for the players to count the cards left in their libraries. Thompson had fifteen, and Utter-Leyton had twenty-three. 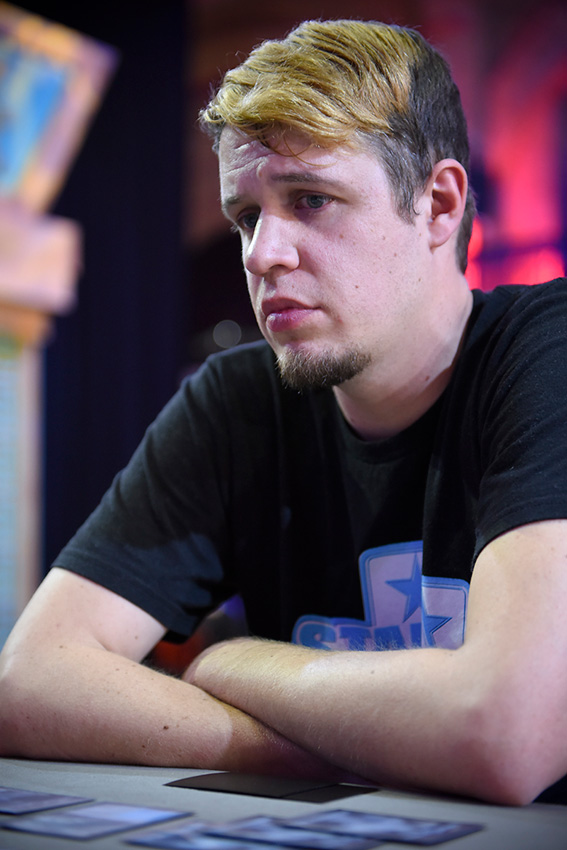 Gerry Thompson, and his no-nonsense stare in a game that featured…well, no nonsense resolving for the first dozen turns or so.

Thompson paused. "I'm going to draw some more cards," he said. Over the next few turns, he seemed to employ a strategy that followed Frost's advice that "the only way out is through," casting draw spell after draw spell despite his quickly thinning deck.

One of those Gearhulks even lived through to Thompson's next turn. Thompson began to attack Utter-Leyton with the zombified artifact.

With three cards in library, Thompson put Utter-Leyon to 11 life.

With no answer to the lethal Gearhulk, Utter-Leyton scooped up his cards. Thompson led the match 1-0.

"It would've made the difference if I hadn't taken that hit," Utter-Leyton mused as the players began to sideboard. "But that might not have worked out."

Thompson began the next game with a mulligan to five.

"This could've been you," Utter-Leyton said as he played an Arguel's Blood Fast on turn two, a nod to the very, very few differences in the two's decks.

"Doing it," Thompson said in remark to Utter-Leyton, as he paid life and drew a card a turn later. "Well, one of us is doing it," he amended.

A few turns later, Utter-Leyton Duressed Thompson, nabbing one of his many counterspells. Then Thompson Duressed Utter-Leyton twice, I assume in retaliation or to send a message, the message being, "You're not allowed to have those Disallows in your hand anymore."

Thanks to the Arguel's Blood Fast, however, Utter-Leyton was able to refill his hand.

"Careful!" Thompson said as Utter-Leyton's life total dipped toward a precarious 6, spent on important things like drawing cards, not chipped away by droll combat damage. Utter-Leyton cast another Duress and, knowing that The Scarab God was close behind, with no recourse, Thompson scooped. Utter-Leyton tied the match, 1-1.

"I don't think I even like Blood Fast," Thompson said, a sentence that would be disturbing in almost any other context.

"What?" Utter-Leyton said, apparently disturbed by that claim in any context at all.

"If I had drawn a threat, I would've killed you, I had a Duress, a Scatter, and a Disallow," Thompson replied as they got ready for the final game.

When Utter-Leyton went to cast his first Hieroglyphic Illumination of the game, Thompson surprised everyone by countering it.

Maybe he meant it, or maybe he noticed that Utter-Leyton had started missing land drops and was hoping to short his opponent on a valuable resource when it came down to a counterspell battle. Several turns later, Utter-Leyton casts Arguel's Blood Fast, and, true to his word, Thompson let it resolve. 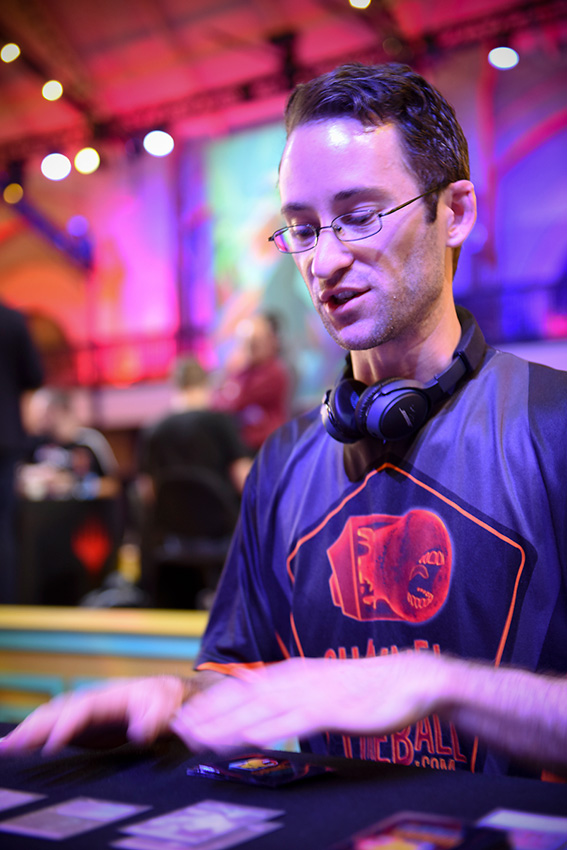 Josh Utter-Leyton, in one of many circumstances where he is tapping mana for spells at the end of his opponent's turns.

The game drew to a crawl, with Utter-Leyton running Torrential Gearhulks one after another into Thompson's countermagic, all while the Blood Fast kept Utter-Leyton's hand stocked.

A turn later, Thompson Duressed Utter-Leyton and saw two Disallows, a Vizier of Many Faces, The Scarab God, a Hieroglyphic Illumination, and two Essence Scatters. The first Duress, plus a second one, cleared away both Essence Scatters.

Next turn it becomes clear why, as Thompson cast a Torrential Gearhulk. Four Disallows later (two from each player, obviously), the Gearhulk resolved and Thompson got to use it to cast a Glimmer of Genius. He was, however, completely tapped out.

"Have fun!" Thompson said as he passed the turn to Utter-Leyton.

"I plan to," his opponent replied.

Utter-Leyton spent a moment dividing his lands into ominous piles. If you don't think piles of lands can be ominous, you've never played against a control deck.

Thompson drew his final card. It was a land. With no way to resolve his own Scarab God in the face of Utter-Leyton's, as Utter-Leyton's copy could reanimate dead Gearhulks to recycle Disallows, Thompson scooped up his cards.