William "Huey" Jensen started the World Championship with a twelve-match winning streak that will live on long after the tournament ends. Winning twelve rounds in a row is an impressive feat at any level of play, but when it happens in a field of 24 of the best players in the world, it's downright incredible.

Jensen is no stranger to success, even amongst top players. He has five Pro Tour Top 8s and six Grand Prix wins in his 20-year career, and his back-to-back wins in this year's late-season Grand Prix, first in Cleveland with teammates Owen Turtenwald and Reid Duke, and then in Kyoto, landed him a Top Pro Point Earner spot in this year's World Championship.

Kelvin Chew, Jensen's opponent in today's first semifinals, was the first player to defeat him this weekend, handing the Hall of Famer his first loss in Round 13. This talented player from Singapore also had an outstanding year, with a win at GP Beijing and a set of consistent Pro Tour finishes leading him to his first season as a Platinum Pro.

With $25,000 and a seat in the finals on the line, Chew would be looking to once again accomplish what so many players couldn't this weekend, and defeat the giant of the World Championship. Jensen, for his part, would be looking to reverse the two-loss streak that capped his Saturday performance.

Chew brought a fresh deck to the World Championship, a new version of Blue-Black Control featuring Search for Azcanta, a legendary enchantment that helps control players sculpt their hand until it transforms into Azcanta, the Sunken Ruin, which generates pure card advantage. Chew's favorite part of the deck, however, is The Scarab God, which he says helps the deck win games it otherwise has no business winning by hitting the battlefield on turn five and reanimating all of its opponent's creatures.

Jensen played Temur Energy, thought by many pros to be the best deck of last season. It lost very little in the recent Standard rotation, and Jensen, as well as a handful of other players on the deck, proved this weekend that it still has what it needs to win. Jensen's version of the deck also has one copy of Confiscation Coup plus two Essence Scatter and a Commit // Memory in the main, and access to more countermagic out of the sideboard, so it's able to battle control more effectively than many creature decks. 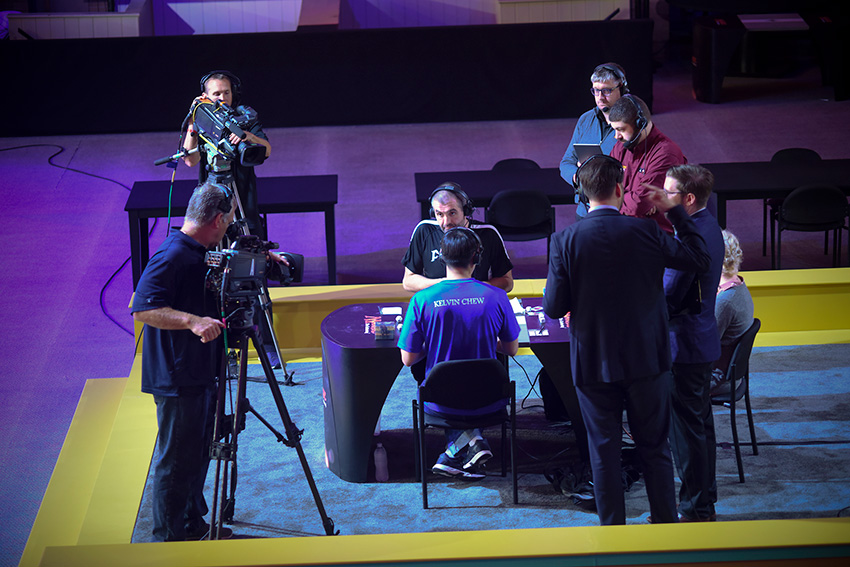 Jensen began applying pressure to Chew's life total early in the game, playing a Longtusk Cub on turn two. Chew was on the draw, and without a Fatal Push to kill it, he was going to be taking a lot of damage from the Kaladesh uncommon. An Attune with Aether on turn three and a successful attack from the Longtusk Cub meant that Jensen now had enough energy to keep it out of range of Essence Extraction, another of Chew's removal spells.

Sure enough, Jensen's turn two Longtusk Cub survived late into the game, putting a significant dent in Chew's life total. On turn six, Chew finally cast a Vraska's Contempt on the Cub. It was an effective answer, but spending a premium four-mana removal spell on Jensen's two-drop wasn't necessarily the best trade.

It was an effective play by Chew, however, who could now worry about drawing cards without the pressure from Jensen's attacker.

Chew's attempt at a Torrential Gearhulk to solidify his position instead got an Essence Scatter from Jensen, the last card in his hand. Chew then untapped and cast The Scarab God. Drawing off the top of his deck, Jensen couldn't come up with an answer to the powerful mythic. A Bristling Hydra met an Essence Extraction before Jensen had enough energy to make it hexproof, and on his next turn Chew's Scarab God pulled Jensen's Longtusk Cub and Bristling Hydra out of his graveyard and onto his side of the battlefield. Jensen's own creatures made short work of their former friend. 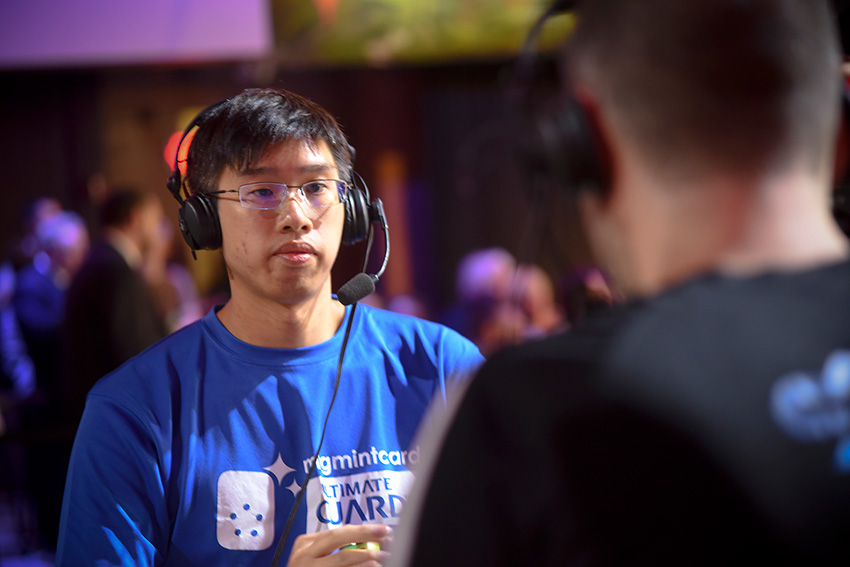 In Game 2, Chew kept a hand with only two lands, but a lot of early interaction, including a Fatal Push and Essence Scatter. With a Search for Azcanta and a little luck, he'd see enough cards to get the lands he needed before his life total got too low.

Jensen didn't have a turn two play, which spelled good things for Chew. The less pressure he was under, the more time he'd have to smooth out his mana-light hand. Chew cast an Essence Scatter on Jensen's first play, a Whirler Virtuoso, and hit his third land drop on turn three. With no other lands, but a Torrential Gearhulk and Glimmer of Genius in hand, Chew chose to play Search for Azcanta, which would let him sculpt his later draws.

Unfortunately, it also left him with only a single untapped land and no recourse when Jensen cast a Bristling Hydra on turn four. It was a resilient threat, since Jensen had enough energy to give it hexproof. It needed to be resilient, since Jensen's next two spells—double Glorybringers—were met with Supreme Will and Aether Meltdown.

Chew tried to stabilize against the Hydra with The Scarab God, but Jensen was able to deal with it using the exert ability from the Glorybringer with an Aether Meltdown on it, plus a Magma Spray. The Spray even exiled The Scarab God so it couldn't make its way back to Chew's hand.

Chew tried again to stabilize, this time using a Torrential Gearhulk. The artifact landed, but got a Harnessed Lightning from Jensen before it could block. This left the Hydra vulnerable for a turn, or so Chew thought when he tried to cast a Vraska's Contempt on it. A Harnessed Lightning from Jensen, however, generated the energy he needed to make his creature hexproof. Not only was it on the battlefield, it was a lethal attacker as well.

Game 3 was the first post-board game, which favored Jensen, as he had access to four Negate and a Supreme Will, plus another Confiscation Coup as an answer to The Scarab God out of his sideboard.

Jensen mulliganed and didn't have a play until turn three, when he cast a slightly behind-curve Longtusk Cub. It stuck, and when Chew tried to cast a Glimmer of Genius on turn four, Jensen had a Negate for it, then had a Whirler Virtuoso to add to his board on his following turn. Facing a Whirler Virtuoso and an ever-growing Longtusk Cub, Chew was forced to cast a Glimmer of Genius on his own main phase. 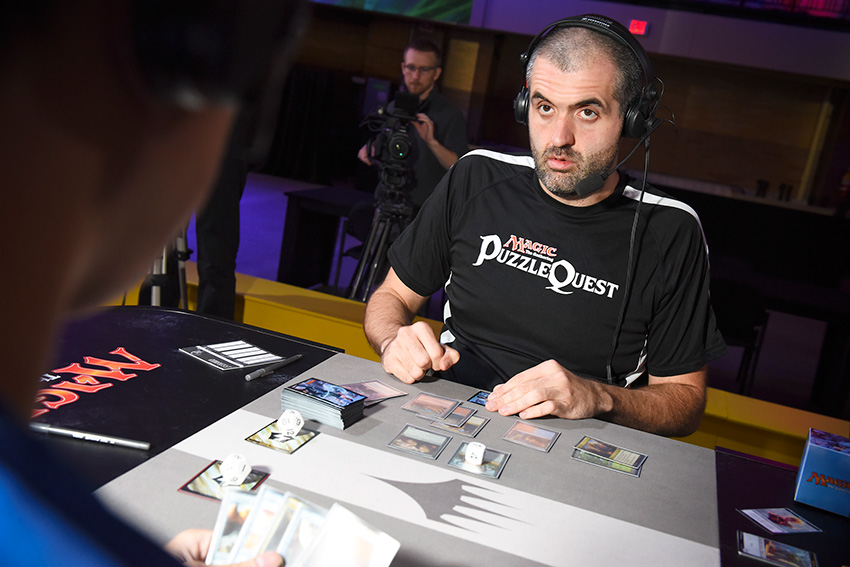 Jensen attacked for 7 damage two turns running, and when Chew's last hope, a Torrential Gearhulk, was countered by Jensen's Supreme Will, the game was over.

Chew seemed to have all the answers in the early stages of Game 4. He had Fatal Push for Servant of the Conduit, Essence Scatter for Whirler Virtuoso, Aether Meltdown for a Glorybringer, even a Vraska's Contempt for a Chandra, Torch of Defiance.

It was the final Whirler Virtuoso that started the avalanche that would bury Kelvin Chew and his hopes of making the finals. The Whirler Virtuoso made a handful of Thopters, and a turn later was joined by a Longtusk Cub. Jensen only nodded as Chew dug through his deck, bottoming both cards he used saw with the scry via Glimmer of Genius, activating Azcanta, the Sunken Ruin, cycling a Censor, and cycling a Fetid Pools, searching for a way to live through Jensen's next attack step.

But Chew came up short, and Jensen was on his way to the finals.

William Jensen defeats Kelvin Chew 3-1 and advances to the finals!