The keys to Friday's 3-0 drafters

The 2017 World Championship kicked off with the 24 competitors splitting into three pods for Ixalan Booster Draft. As each pod yielded one 3-0 player, the draft portion concluded with three players at the top of the standings: No. 23 Christian Calcano, Magic Online Champion Josh-Utter Leyton, and No. 12 William Jensen.

I sat down with the trio to talk about their draft and to learn about their general approach to Ixalan Limited. I learned that low-curve, aggressive decks work well in this format, and that it is essential to figure out not only the open colors, but especially the open tribe. 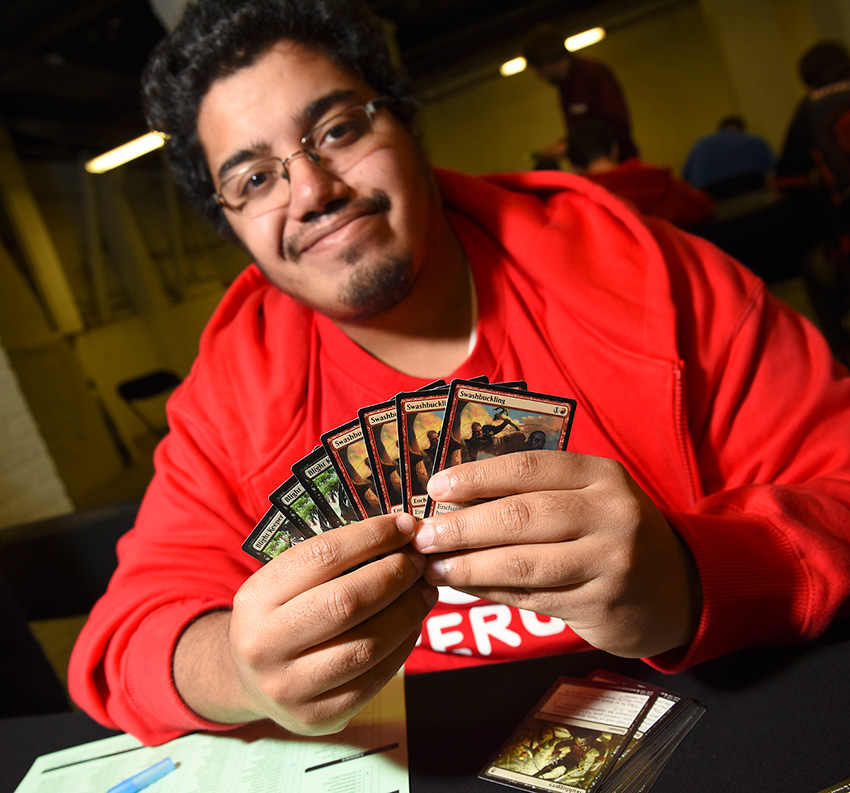 Platinum Pro and globetrotter Christian Calcano, whose 2016-17 Magic season was a clear personal best, liked all the auras in Ixalan draft. He drafted a black-red deck with a very low curve and was able to defeat all of his opponents, including former World Champion Seth Manfield and his red-white Dinosaur deck in Round 3.

The standout in Calcano's deck was the quadruple Swashbuckling. Combined with three Blight Keeper and various other cheap creatures, he was capable of some very fast starts. Indeed, in multiple games against Manfield, Calcano was attacking with a 3/3 flier early on, and when Manfield's answers were exiled by Kitesail Freebooter, Calcano dominated the ensuing damage races.

After the match, I asked Calcano to walk me through his draft. "I opened Sanctum Seeker, and I generally like to play White-Black Vampires," he explained. "But I saw immediately that white wasn't open, so I had to jump into another color combination immediately."

"I third-picked Siren Stormtamer, but the blue cards that I wanted weren't really coming, so I started taking some red cards. I got a late Dire Fleet Captain and a Swashbuckling at the end of the pack. Pack 2, Pick 1, I took Fathom Fleet Firebrand. You need two-drops drops in this format, and I got all the Auras after that."

By prioritizing early drops, avoiding expensive cards, and focusing on the key cards for what he was drafting, Calcano was able to assemble a coherent deck that ran over his opponents before they had a chance to set up. It rewarded him with a 3-0 start to the tournament. 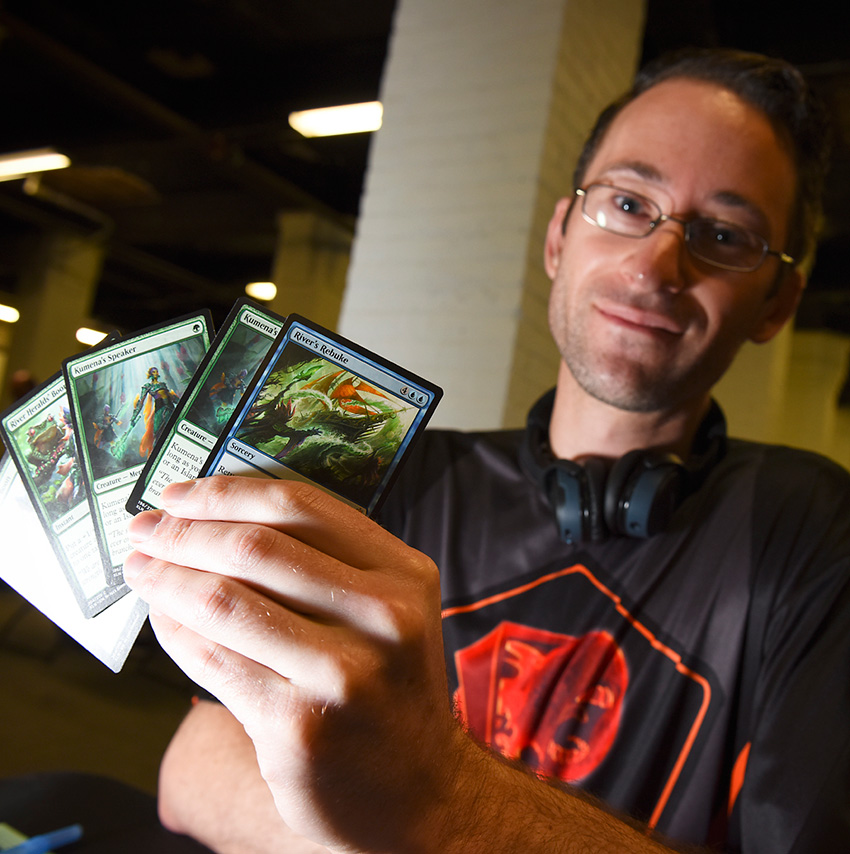 Josh Utter-Leyton found himself with the cards needed for an absurdly powerful Merfolk deck.

Hall of Fame-elect Josh Utter-Leyton emphasized that it was important to find the open tribe in Ixalan draft and then doing whatever that tribe is trying to do. He ended up drafting Green-Blue Merfolk and ran the table, defeating Donald Smith in the fight for 3-0. Smith's was also blue-green, but it combined Merfolk and Pirate synergies and did not look as focused as Utter-Leyton's deck.

Utter-Leyton's deck was heavily focused on Merfolk tribal synergies. Most of his Merfolk granted the other Merfolk certain abilities or counters, and he also had two River Heralds' Boon as additional tribal payoffs.

The synergies didn't stop there: Utter-Leyton could also pick up Watertrap Weaver with Storm Sculptor to re-use the enters-the-battlefield effect, which actually happened against Donald Smith…twice. With this combo, Utter-Leyton locked down a Shipwreck Looter enchanted by One with the Wind for long enough to win the race with his unblockable creatures. The other game was decided by River's Rebuke, Utter-Leyton's first pick from the draft. According to him, it's "one of the absolute best rares in the set."

After starting the draft with this bomb rare, Utter-Leyton took Raging Swordtooth over Jade Guardian as his second pick. "Obviously the gold card doesn't play with my bomb rare, but it is stronger. I think you have to be willing to give up a first-pick to take what's open, otherwise you're not going to enough playables."

Utter-Leyton then took one more red card, but when he was passed Vineshaper Mystic fourth of fifth, he saw it as a signal that Merfolk was open. "I just moved in from there. The person I was passing to ended up in Merfolk as well, so Pack 2 ended up pretty awful, but Pack 3 was insanely perfect for me." On the whole, Utter-Leyton's draft deck worked out swimmingly.

"Vampires and Merfolk were the two decks that I wanted to draft the most. If you can get all the uncommons, then Merfolk is actually the best tribe. But I'm not going to 100% avoid any of the other combinations. Basically my strategy is that I'm just going to take whatever tribe is open and move in on whatever that tribe is trying to do." 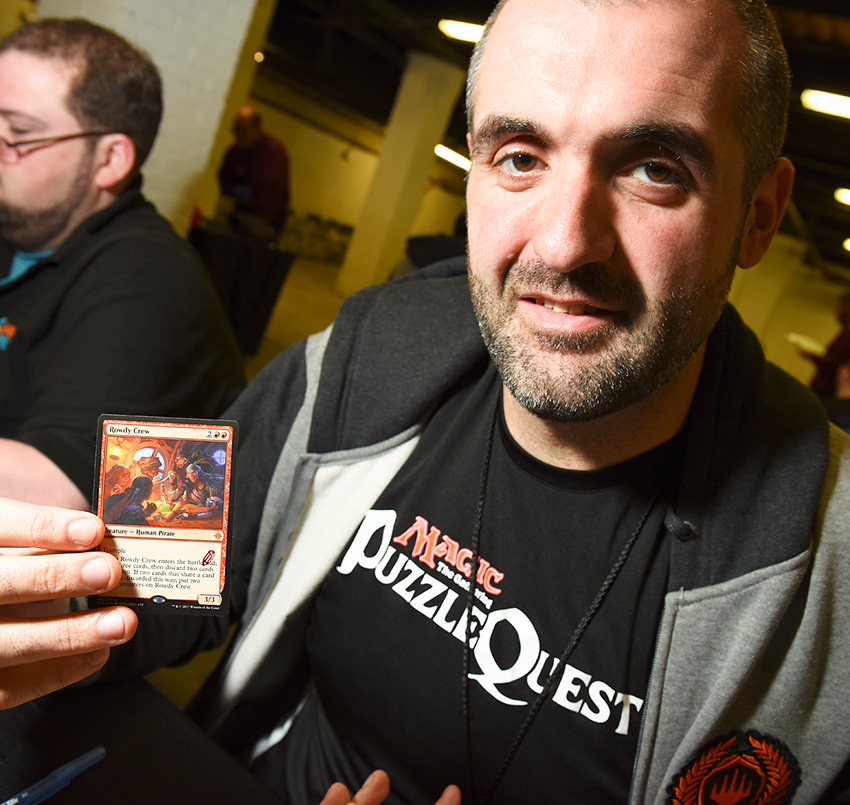 William Jensen stayed on target with his Territorial Hammerskulls even despite fighting for colors with his neighbor to earn his pristine Day 1 Draft record.

Five-time Pro Tour Top 8 competitor William "Huey" Jensen was arguably the most experienced player in the field, given that his Pro Tour debut was back in 1998. His draft took place on the featured pod, and you can follow his entire draft in the Draft Viewer. It wasn't an easy draft, as Martin Müller to his right ultimately ended up in the same colors, but Jensen still made it work. In the final round of the draft, he even defeated Javier Dominguez's Blue-Black Pirates deck, supported by such rares as Fell Flagship and Fathom Fleet Captain, to move to 3-0. You can watch that match here. As Jensen told me, "My first two games against Javier were great games of Magic. I felt like we could both almost just attack with all of our creatures or none of our creatures every turn, and we could've both tried to be offensive or defensive. It turned into a race, and I thought they were really good games."

In the draft, Jensen first-picked Territorial Hammerskull and then faced a choice between Vanquish the Weak and Tilonalli's Knight for his second pick. "I went with Tilonalli's Knight. It's a perfect turn two play for Territorial Hammerkull. As a first-pick, I'd rather have Vanquish the Weak, but I thought the synergy was worth it and I like the aggressive decks. Also, in a tournament like Worlds, it's worth taking a little bit of risk. I think it's worth focusing on the synergies, and the synergies in this format are all so strong."

"I took basically all red cards in the first pack. I did think that red was open. I got a sixth pick Unfriendly Fire, which was surprisingly good for me in the draft. I didn't really think that white was open, but Pack 2, Pick 2 I got another Territorial Hammerskull. I was content to play a lot of red cards with a few white cards if two of them are Hammerskulls. I think that card is just so good in this format."

Although he had to play a couple of filler cards given that the premium cards were swallowed up by Martin Müller in the third pack, Jensen's deck ended up fine. Given that he ended up 3-0 while being fed by a drafter in the exact same two colors, I wondered how important it was to be in the right colors in this format.

Jensen's answer was illuminating. "It's not so much colors, it's tribes," he explained. "If somebody is drafting white in front of you, but they're playing Vampires and you're drafting Dinosaurs, then it will be fine." You may not be passed the premium removal in such a situation, creating a weird situation where something is only half-open, but judging from the experiences of the 3-0 drafters, finding the open tribe might just be the key to Ixalan Limited.