Red players rejoice and control players despair, because according to Donald Smith, his new take on Mono-Red breaks some of the fundamental rules of Magic, very much to its advantage. 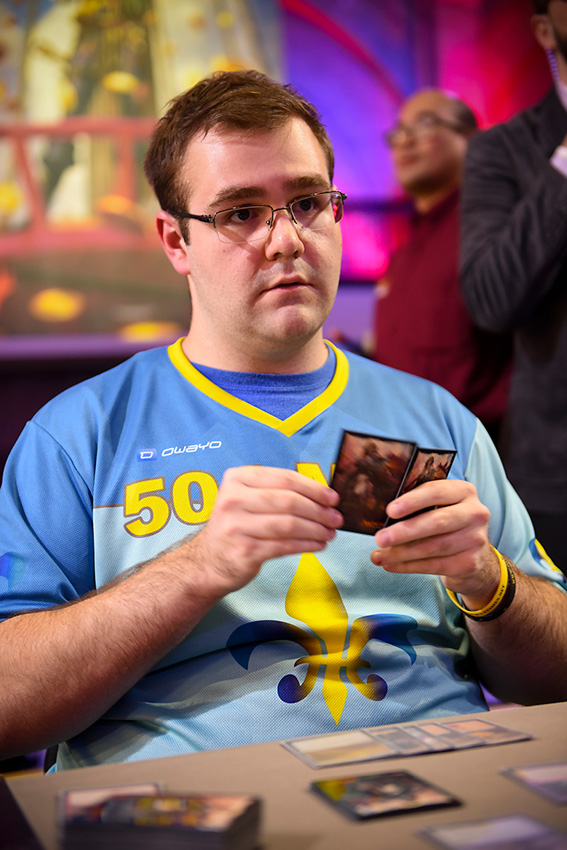 Donald Smith had limited prep time, so he opted to explore more of what Standard's red cards could do.

Smith's preparation for the World Championship happened during a bit of a time crunch.

"I was actually in the middle of a move to Seattle, so that ate forty hours of my testing time more or less," Smith said. "Because of that, I had to play smart, not hard. My philosophy was that I have a time disadvantage and I'm bottom three in the field, so I'll force mono-red. I need to play four Lightning Strikes, because that's how I'm going to get my wins."

Smith admits that this mindset doesn't sound too optimistic, but he has higher hopes than he might initially let on.

"Even though it sounds defeatist, I'm actually super confident because I'm not worrying about too many wild things like combo decks. I'm like, let's beat down every round, that's all I need to do."

Like the Ramunap Red decks of seasons (or singular season) past and present, Smith's deck relies on cheap and hasty creatures along with burn spells to deal 20 points of damage to his opponents in as few turns as possible.

Unlike other red decks, however, Smith forgoes the (literally) more powerful two- and three-drop attackers like Kari Zev, Skyship Captain and Ahn-Crop Crasher in favor of treasure-producing creatures Wily Goblin and Captain Lannery Storm. For Smith, Wily Goblin was the key to cracking this new post-rotation red puzzle.

"Everyone thinks that card's garbage, but it's really good," Smith said of the 1/1 Goblin Pirate. "I could talk for an hour about Wily Goblin."

He didn't talk about it for quite an hour, but he did have a lot of praise to heap on a card that has largely flown under the radar. That Wily Goblin was only a 1/1 for two red mana piqued Smith's interest. The way he saw it, treasure had to be so good that the creature couldn't have better stats or cost less mana, for fear of creating too powerful a spell.

"It breaks the fundamental part of the game, the mana curve," Smith said of the treasure mechanic. "It accelerates a curve, and it changes the curve in all different kinds of ways. The deck just wasn't able to do that before."

"I built this list, and it just performs. The main interaction is Wily Goblin into Chandra on turn three, but I don't want to hinge on only two cards, so I started thinking about what else works."

Smith's deck can operate from two different angles, taking two different plans of attack. The first is accelerating out powerful cards like Chandra, Torch of Defiance, Glorybringer, and eternalized Earthshaker Khenras using treasure from Wily Goblin and Captain Lannery Storm. Unlike previous versions of mono-red, which shied away from these cards due to their high converted mana cost, Smith's deck has four copies of Chandra and two of Glorybringer in the main deck.

Smith's other angle of attack is, well, literally attacking. A potential ideal curve for Smith might start with a Bomat Courier on turn one, a Wily Goblin on turn two, and Captain Lannery Storm on turn three. Sacrificing both treasure tokens to cast a Lightning Strike or Abrade can lead to 7 damage on turn three. At that point he's almost out of cards in hand, but in his eyes, that means next turn it's time to cast a Hazoret the Fervent that's ready and able to attack.

Treasure also means that the red deck, dubbed Treasure Red, doesn't need as many lands in play to use Ramunap Ruins, leading to the likelihood of getting more activations even after a land or two is already sacrificed.

One challenge to building mono-red in the wake of Standard rotation and the introduction of Ixalan was that the deck lost more one-drops than it gained. Smith thinks he's found a way around that, however.

"The hidden mode of the deck that it really took a lot of testing to realize is mono-red lost a lot of one-drops, but Wily Goblin's a one-drop if you really think about it," he said. "It's two mana, but it makes a mana, so there's a lot of turns where I'm playing Wily Goblins and sacrificing the treasure immediately, making it a 1/1 for one, and when your deck's built around Hazoret, that doesn't really matter. I'd play Ornithopters if it meant my Hazoret was good. It's not obvious, but it makes so much sense."

The necessity of building and testing a deck in what little time he had while moving may have led Smith to this straightforward and aggressive strategy, but he's happy with his invention.

"This was really weird, it's never happened to me before, but this was the first deck I built," Smith said. "These 60 cards are the exact same 60 as they were the Friday previews dropped. I've never had that before. This deck is like a godsend."

Perhaps Smith thinks so, but any opponents facing down a turn three Chandra are likely going to feel otherwise. Smith's deck looks as though it could sit in an ideal place for mono-red, able to deal enormous chunks of damage in the early turns of the game, but also able to cast powerful spells that can fight through an opposing board of creatures. In the coming days and weeks, Smith and other enthusiastic aggro players are sure to put Smith's theorizing to the test.