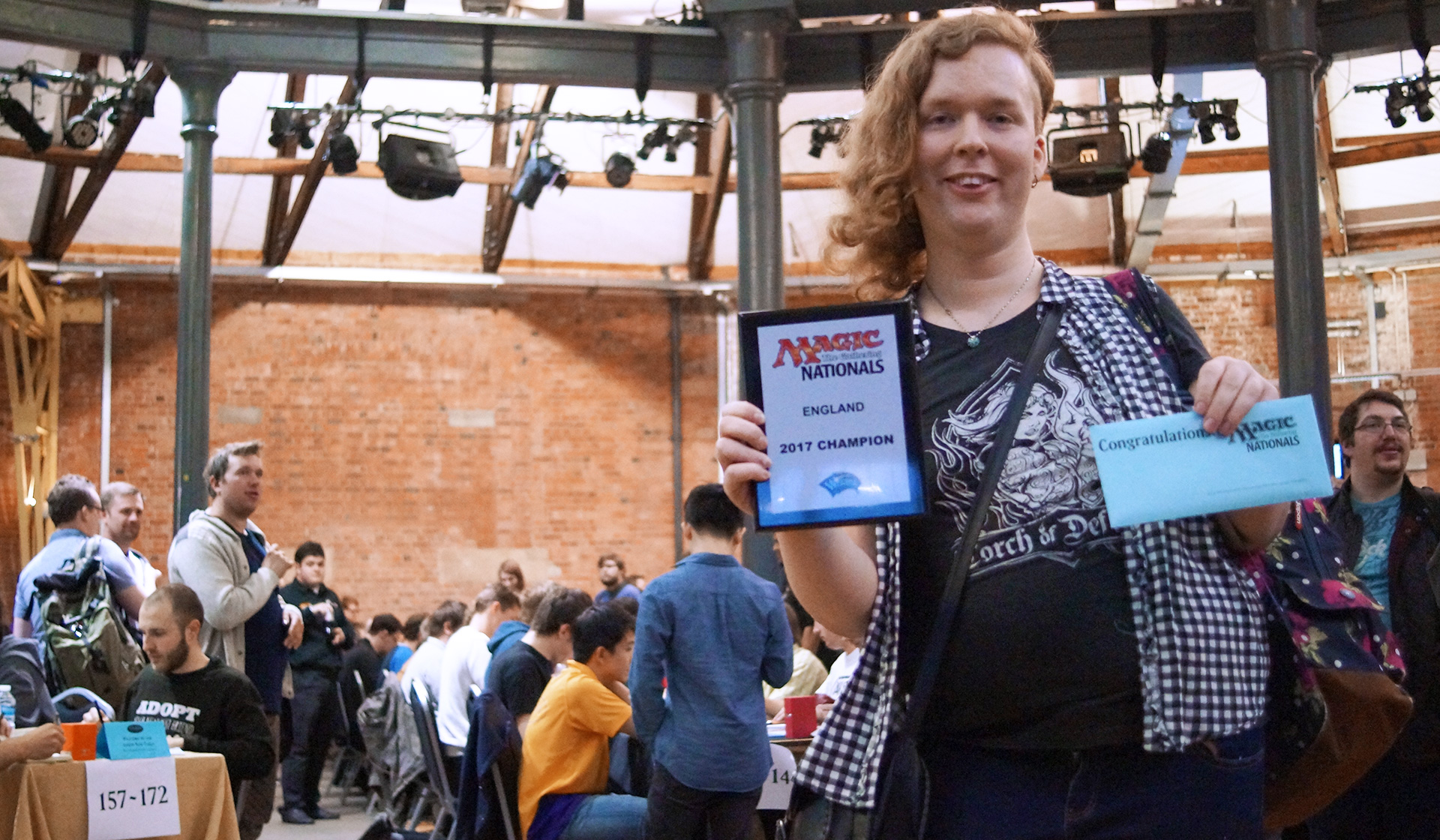 Autumn Burchett left more than a mark on the English Nationals, she scorched away all opposition on the way to an unbeaten 14-0-1 record and the title of National Champion!

THE HASHTAG FOR THE 2017 ENGLAND NATIONAL CHAMPIONSHIP IS #MTGNationals. JOIN THE CONVERSATION.

Autumn Burchett left more than a mark on the 2017 English National Championships. She scorched all opposition away on the way to an unbeaten 14-0-1 record, with the '1' coming from an intentional draw in the twelfth round in order to guarantee being top seed in the Top 8. Ross Broxup tried his best to stop her 4-Color Energy deck in the final, but a mulligan to four in the deciding game left him without enough resources to keep up. At least he can console himself with a place on the national team, joining Burchett and team captain Niels Molle.

Molle came close to the double of team captain and national champion. He was part of an experienced Top 8 that included two former national team members, Peter Ward and Daniel Gardner, and a former Pro Tour quarterfinalist in Quentin Martin.

Unfortunately for Molle, he came up against Burchett in the quarters and nothing was going to deny her glory this weekend. She took down her future team captain, went on to overcome Ward's Zombies in a very tight semifinal, and crushed Broxup's Vehicles in the final to earn the title of English National Champion!

Top Stories of the 2017 England National Championship by Craig Jones

Nationals have returned to England and 390 people descended on The Roundhouse in Derby to battle it out for the honor of making the World Magic Cup team and the bragging rights of being National...

Nationals is a mixed format tournament, with players having to navigate six rounds of Standard Constructed and six rounds of Amonkhet/Hour of Devastation Booster Draft. After twelve rounds only 8...

After twelve Swiss rounds, the field of 390 has been reduced down to just 8! Who are the Top 8 competitors competing for two World Magic Cup slots and the prestigious title of England National...

390 players came to The Roundhouse in Derby to battle it out at the English Nationals. At stake are two slots on the World Magic Cup team and the bragging rights of being English National Champion.

After three rounds of Standard and four rounds of Amonkhet/Hour of Devastation Booster Draft the early pace-setters are Jimmy Ray, Autumn Burchett, current English Team Captain Niels Molle, and Ross Broxup. All four ended the day with perfect 7-0 records. There is still plenty to play for with two rounds of Booster Draft and three rounds of Standard to come tomorrow. Join us then to see who will be crowned Champion of England!

390 players made their way to The Roundhouse in Derby to battle it out for a place on Team England at the World Magic Cup. The Roundhouse is aptly named – The main hall is round. The tables...