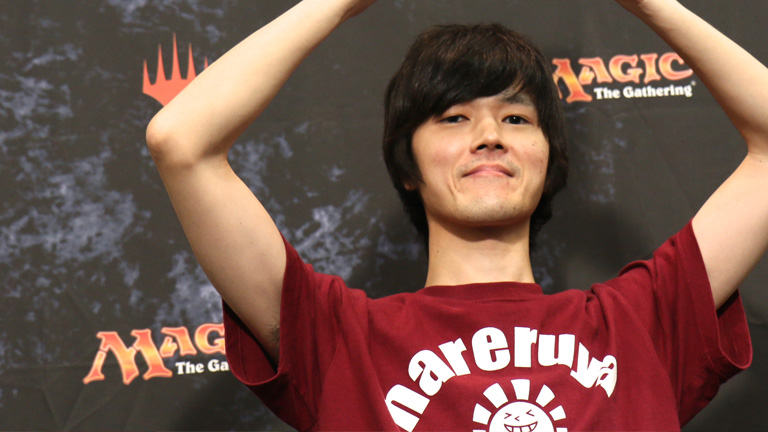 THE HASHTAG FOR THE 2017 JAPAN NATIONAL CHAMPIONSHIP IS #MTGNationals. JOIN THE CONVERSATION.

619 Japanese players traveled across their Land of the Rising Sun - even if they lived across the straits of Hokkaido or far-flung Fukuoka - to attend Japan Nationals. Converging at the heart of Shizuoka, just fifty miles away from iconic Mount Fuji, all of them had dreams and that was to either become a National Champion or earn a coveted spot on the Japan World Magic Cup team. Not only were they battling for a prize purse of one million yen (approx. $9300), there was priceless eternal glory at stake.

(8) Yuuya Watanabe already locked up his spot at the World Magic Cup as the top Pro Point earner of Japan in the 2016 - 17 season. Still, he attended this weekend and “seemingly-effortlessly” made the Top 8. When Kenta Harane and (8) Shota Yasooka advanced to the finals, the Japan World Magic Cup team was set in stone. Facing off against each other in three exciting matches, it was Harane who triumphed at the very end, taking home the grand prize of 360,000¥ ($3330) and the Champion trophy.

Rounding out the Top 8 were semifinalist Takesi Hattori, and quarterfinalists Yuki Matsumoto, Ryoichi Tamada, Riku Kumagai, and Yuuta Hirasawa. With that, we’re going to call it a day and wish Team Japan good luck at Nice, France. Once again, hearty congratulations to all who made the Top 8. Your fellow countrymen should all be very proud of you!

After six rounds of Standard Constructed and six rounds of Amonkhet/Hour of Devastation Booster Draft, the Top 8 was born! Displaying prowess in both formats, these eight players need to advance...

After twelve Swiss rounds, the field of 597 has been reduced down to just 8! Who are the Top 8 competitors competing for two World Magic Cup slots and the prestigious title of Japan National...

As the sun set in the Land of the Rising Sun, only 5 players out of 619 went home with the perfect 7-0 record. They were Ken Yukuhiro, Shota Yasooka, Ryo Nakada, Takesi Hattori, and Takeshi Miyawaki. Tailing them were other heavyweights such as Kazuyuki Takimuya, Kentaro Yamamoto, Yuuya Watanabe, Keita Kawasaki, Riku Kumagai, Ryoichi Tamada, Masashiro Kuroda, and Yuki Matsumoto, all at 6-1 records.

With just five more rounds to go tomorrow, the race to the top was getting very intense indeed. Be back tomorrow as we continue bringing you the action from the heart of Shizuoka! In less than 24 hours’ time, a new Japan National Champion will be crowned and the 2017 World Magic Cup team will be born!

597 Japanese players traveled across their Land of the Rising Sun - even if they lived across the straits of Hokkaido or far-flung Fukuoka - to attend Japan Nationals. Converging at the heart of...