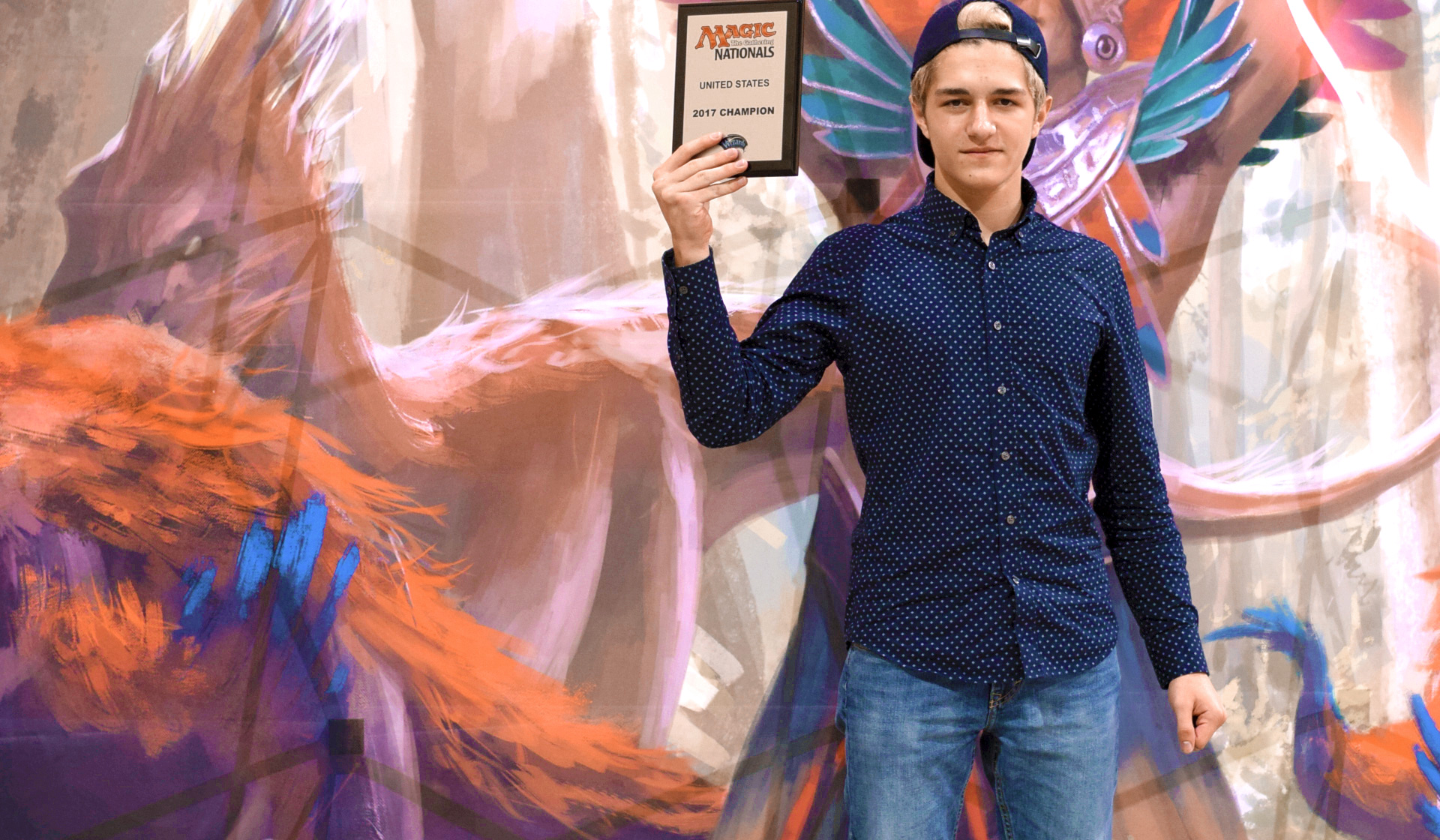 17-year-old Oliver Tomajko is the new U.S. National Champion after besting a field of 600 in Richmond.

THE HASHTAG FOR THE 2017 UNITED STATES NATIONAL CHAMPIONSHIP IS #MTGNationals. JOIN THE CONVERSATION.

After 12 rounds of Magic, six Standard and six Ixalan Draft, we finally have a winner – and a national team. Oliver Tomajko and Gerry Thompson will join Reid Duke as the representatives of the United States at the World Magic Cup in Nice, France in Demember!

Of course, there was more than just the Cup on this line. There’s the little matter of becoming the first National Champion since the last incarnation of the tournament ended in 2011 in favor of WMC qualifiers. More than 600 players turned up in Richmond to compete to be the first to hold the title since Ali Aintrazi, but in the end it was Tomajko and Thompson who would battle for the honor.

And it was 17-year-old Tomajko who prevailed, besting everyone on the way to the title. With that, the U.S. team is set, and with other countries fielding teams with multiple Hall of Famers or Pro Tour winners, the Americans will certainly have their hands full. But as the years – and excellent play at the National tournament – have shown, these players are up for the challenge.

Over 600 players arrived at the Greater Richmond Convention Center on Saturday to take part in the U.S. National Championship, the first since 2011. The players made their way through six rounds...

US Nationals Top 8 Decklists by Corbin Hosler and Meghan Wolff

After twelve rounds of Swiss play, six of them Standard, the US Nationals Top 8 has been decided. Their decklists are below, and include Sultai Energy, Abzan Tokens, Mardu Vehicles, Blue-Black...

US Nationals Top 8 Profiles by Corbin Hosler and Meghan Wolff

After six rounds of Standard and six rounds of Ixalan Draft, the Top 8 at U.S. Nationals has been set. All eight of these players are excited for the opportunity to represent their country at the...

by Corbin Hosler and Meghan Wolff

More than 600 players arrived in Richmond to take part in the return of the U.S. National tournament, and after seven rounds – four Standard and three Draft – the field has begun to sort itself out as we march toward the Top 8.

World Champion William “Huey” Jensen started out strong in the tournament, but will have his back to the wall on Sunday after a rough draft. Meanwhile, everyone ese is chasing the five undefeated players – Colron Chambers, James Tessitore, Oliver Tomajko, Alan Hubbard and Jeremy Sager.

It will take both a strong Standard deck as well as another successful Ixalan Draft for the undefeated players to advance to the Top 8, and the field behind is loaded with big names including Brad Nelson and Brian Braun-Duin. As the fallout from the World Championship continues, it’s sure to be an exciting Sunday as players jockey for position on the way to the Top 8.

You can watch the action live at Twitch.tv/Magic.

Over 550 players arrived at the Greater Richmond Convention Center to take part in the U.S. National Championship, the first since 2011. Today, they played four rounds of Standard and three rounds...