Over 550 players arrived at the Greater Richmond Convention Center to take part in the U.S. National Championship, the first since 2011. Today, they played four rounds of Standard and three rounds of Ixalan draft. Tomorrow, they'll return for another draft and two rounds of Standard, vying for a spot in the Top 8.

The Standard format is far from set, as, in the week leading up to the event, players were still building, testing, and playing in a new and volatile Standard environment. While last season stand-byes Temur Energy and Ramunap Red have had strong showings in recent events, other strategies like Vampires and Abzan Tokens were poised to make a breakthrough

The first and second place players from this weekend's competition will earn a place alongside team captain Reid Duke at the World Magic Cup this December.

A Tournament of Champions

High-caliber players from across the country made their way to Richmond for U.S. Nationals, including some who competed for the title of World Champion just last weekend. Christian Calcano, Eric Froehlich, William Jensen, Seth Manfield, Brad Nelson, Gerry Thompson, and Owen Turtenwald, all fresh off their appearance on the World Championship stage, came to make a run at the title of U.S. National Champion. 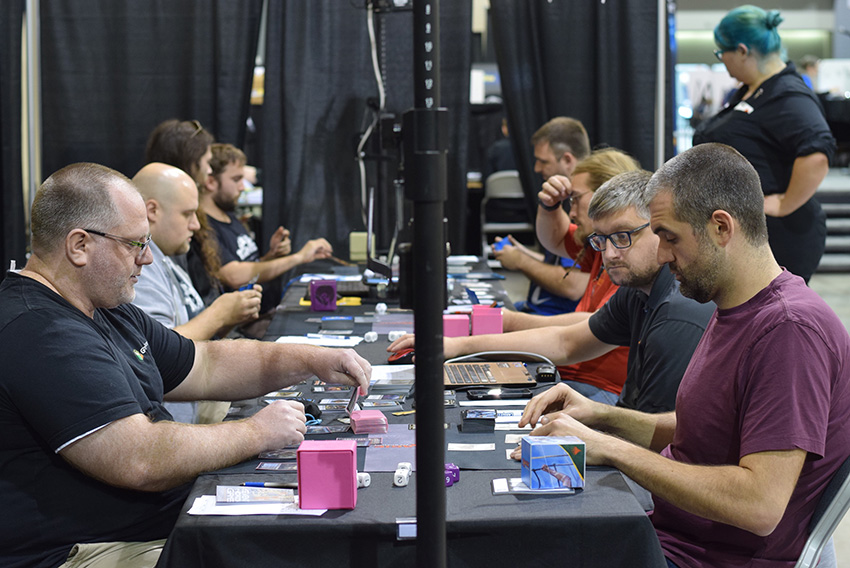 In Round 3, the feature match area hosted a particularly impressive suite of players: Seth Manfield, Brian Braun-Duin, and William Jensen, the 2015, 2016, and 2017 World Champions.

This year's tournament is the first U.S. Nationals held since 2011. That means that the 2011 U.S. Nationals winner, Ali Aintrazi, has held the title for the past six years. 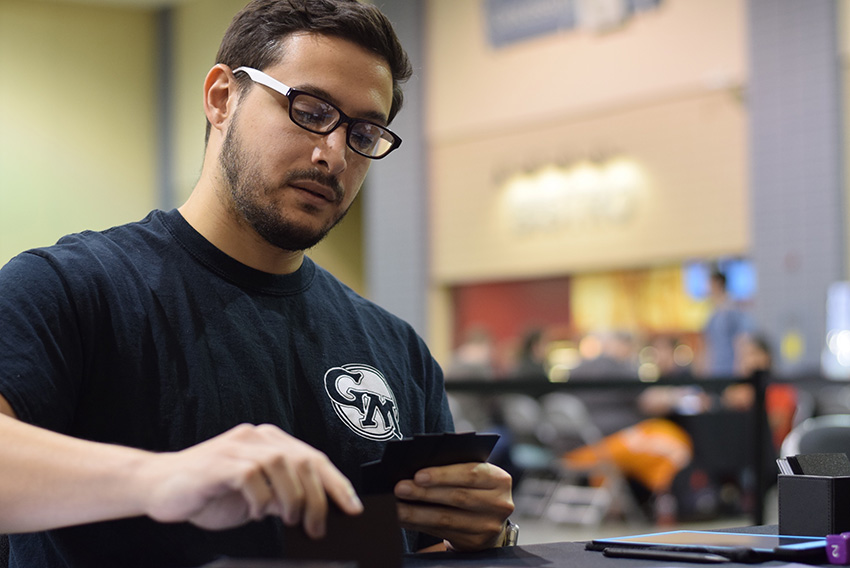 “I remember the biggest deck back then was Cawblade," Aintrazi said. “The Top 8 had six Cawblade decks, my Blue-Black Control deck, and one Pyromancer's Ascension deck. I had innovated the blue-black deck to beat the best deck in the format, which was Cawblade."

While six years separate that U.S. Nationals and this one, Aintrazi held onto the strategy of innovating a deck, Esper Tokens, designed to effectively fight the deck he most expected to see this weekend, Temur Energy.

Among players who came into the tournament with two byes, Temur Energy was by far the favorite deck, with six notable pros playing it. Other choices included two copies of Blue-Black Control, featuring Search for Azcanta and The Scarab God, and the and emerging archetype Esper Tokens.

While Abzan Tokens made its way into the Top 8 on the other side of the world, it was Esper Tokens that was making waves here at U.S. Nationals. A deck that has been on many builders' and brewers' radars for the past few weeks, Hidden Stockpile decks, whatever their third color, share the goal of flooding the battlefield with vampire, servo, and zombie tokens.

“The three most important cards are Anointer Priest, Anointed Procession, and Hidden Stockpile," said Brian Braun-Duin, who's playing Esper Tokens this weekend. “You can use Hidden Stockpile plus Anointed Procession to generate a lot of tokens every turn, and then Anointer Priest allows you to gain life off that token generation, which keeps you alive against a variety of decks." 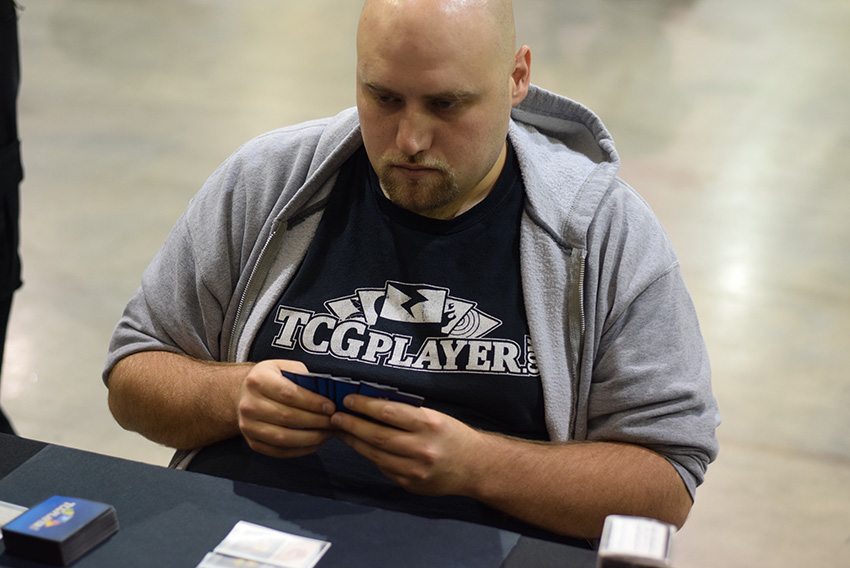 “I've been playing it for about a month, and I think it's finally waking up this week," said Ali Aintrazi, who's also on the deck. “It still hasn't put a good result up, so people are kind of prepared for it, but not really."

Both Aintrazi and Braun-Duin were drawn to blue as the third color over green because of the access to Search for Azcanta and Champion of Wits. The card advantage and filtering that these two spells offer added consistency to a deck that has a number of cards that are bad on their own but work well once the deck's synergies are online.

“I played with the Abzan variety, and it felt lacking," Braun-Duin said. “Vraska was really good in some match-ups, but really bad in others, and that's the main call to be green. I felt like the deck lacking some amount of consistency and power. So I ended up going back to Esper because I know that Search for Azcanta provides both of those things, as a way to filter your draw steps early - you have a lot of really bad cards in your deck, so it's important to filter through, and then later in the game it just finds you a card every turn.

In addition to the core of the deck - Hidden Stockpile, Anointed Procession, and Anointer Priest - and Search for Azcanta, Esper Tokens plays a mix of spells that make use of the central strategies, like Start // Finish and Legion's Landing, and removal like Fatal Push and Fumigate.

Aintrazi suspects that once the deck puts up a handful of good results, players will come to tournaments more prepared for it, with cards like River's Rebuke and Slice in Twain. The current metagame, however, is a decent place to play Esper Tokens.

“I think any control deck is a great match-up," Braun-Duin said. “The control decks have a hard time with the enchantment-based grindy-ness. I think that Ramunap Red is a slightly favorable match-up, but not by as much as people would think. So those match-ups are both reasonably decent. And then Temur's very close, it can go either way."

On Friday, eager U.S. Nationals competitors made their way to the convention center hall to get in some early rounds of Standard and potentially win two byes in the main event. The winning decks of Friday's Last Chance Trials included familiar faces like Ramunap Red, Temur Energy, and White-Blue Approach of the Second Sun. They also included a few outliers and potential harbingers of new innovations in the Standard metagame.

One such outlier was Thomas Zhennan Guan's midrange Jund deck, which included surprising early creatures like Merfolk Branchwalker, a set of well-rounded answers including Sweltering Suns, Lightning Strike, and Doomfall, and some of the most powerful late-game finishers available.

Another set of winning deck lists played on innovations seen a few weeks ago, in the immediate aftermath of Ixalan's Standard debut, that tried to take advantage of one of Ixalan's most powerful rares, Hostage Taker. They combined Hostage Taker with the powerhouse start of a turn-two Winding Constrictor into a turn-three Rishkar, Peema Renegade, as well as solid counters-synergistic cards like Walking Ballista.

Drafting with Brad Nelson (Ten Years After His Debut)

At U.S. Nationals ten years ago, a young Brad Nelson made his premier-level event debut. A relatively unknown player from North Dakota, Nelson left an impression on the field by going 7-0 in draft.

10 years ago at #MTGNationals @fffreakmtg gave us a glimpse of all his coming success. https://t.co/TQ9NSBgOro

Today, Nelson drafted a base-green deck with a handful of blue cards and a single Raging Swordtooth as a red splash. He had a swath of combat tricks, including three copies of River Heralds' Boon and a Crash the Ramparts, and a fairly low curve of creatures that included two Jungle Delvers.

The draft itself didn't go as well as Nelson hoped, but he was able to pivot into making the most of what he had during deck construction, based also on his read of what the other players in his pod had been drafting. 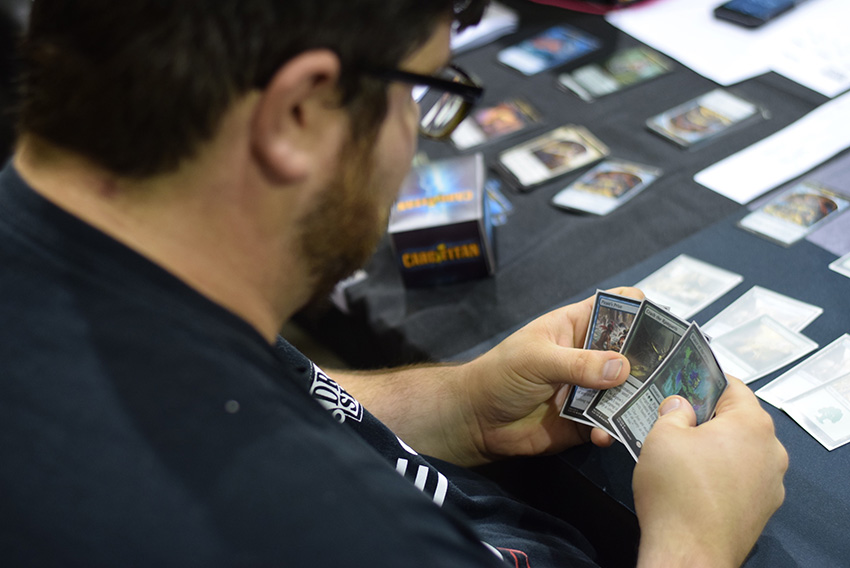 “It's a weak deck, but I feel like there was enough waffling in the draft between colors that everyone seems a little off. When that happens, sometimes people pick early removal and then move away, so a lot of removal ends up on the benches."

With this in mind, Nelson put together what he called a “pants” deck, even though it didn't have an auras, so called because it would invest a lot of cards and mana in one giant creature.

“I went into deck construction, and late in the draft, assuming that that's what I was feeling, was a lot of early removal and switching colors by a lot of people. If that's the case, then I want to be really aggressive and make sure my curve is good. I've been really aggressive with my River Heralds' Boons."

“I haven't really done anything special," Nelson said of his first two rounds of draft, both of which he won. “I've been casting Crash the Ramparts to win most of my games."

Checking in Around the World

It's the final weekend of Nationals around the world, and thousands of players are fighting for a place on their country's World Magic Cup team.

In New Zealand, the field was dominated by Ramunap Red and Blue-Black Control. The Top 8 decks there include three Ramunap Red, one Black-Red, two Abzan Tokens, one Sultai Energy, and one Temur Energy.

At the end of Day 1, six competitors remained undefeated. Tomorrow, they'll lead the field as the U.S. Nationals barrels towards its Top 8.

Oliver Tomajko, from New York, has been playing Magic for about four years. Last year, he made the Top 8 of Grand Prix Portland playing Temur Emerge. Here in Richmond, Tomajko played Blue-Black Control in Standard. His favorite card in that deck is Essence Scatter, while his favorite card in his black-red aggro draft deck was Vance's Blasting Cannons. 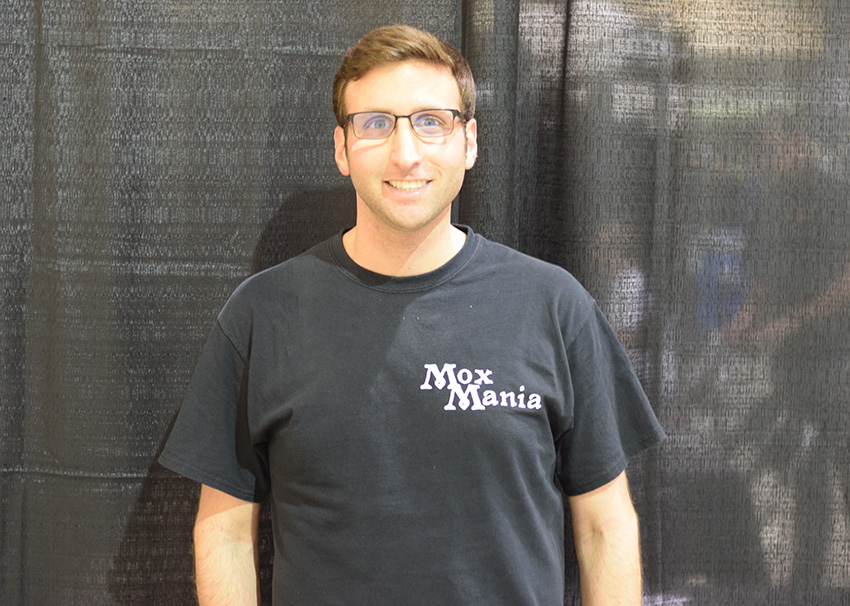 Jeremy Sager is from Madison, Wisconsin, and has been playing Magic since Journey into Nyx. He made the Top 16 of a handful of Grand Prix last year, and is off to a perfect start on Day 1 of U.S. Nationals. In Standard he played Sultai Energy. His favorite thing about the deck is drawing cards off of creatures like Glint-Sleeve Siphoner, a particular favorite, and Rogue Refiner. In draft, he put together a red-white deck. His all-star was a Captivating Crew, which in Round 6 got to repeatedly steal a Blight Keeper with a Mark of the Vampire on it. 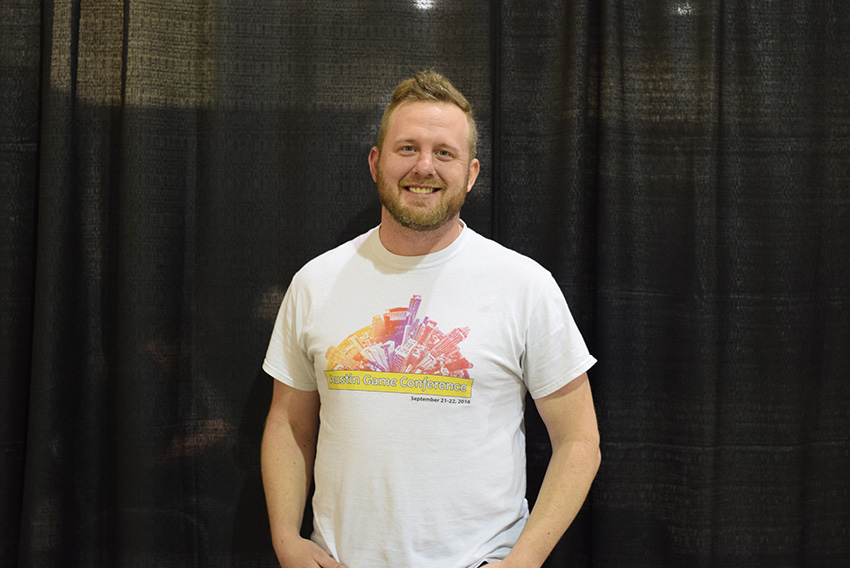 Houston, Texas player Alan Hubbard has been playing Magic since 1996. He played Temur Energy in Standard because it has the most raw power-per-card. He drafted a Blue-Black Pirates deck for the last three rounds of the day, featuring a copy of the powerful flier and tempo card Dreamcaller's Siren. 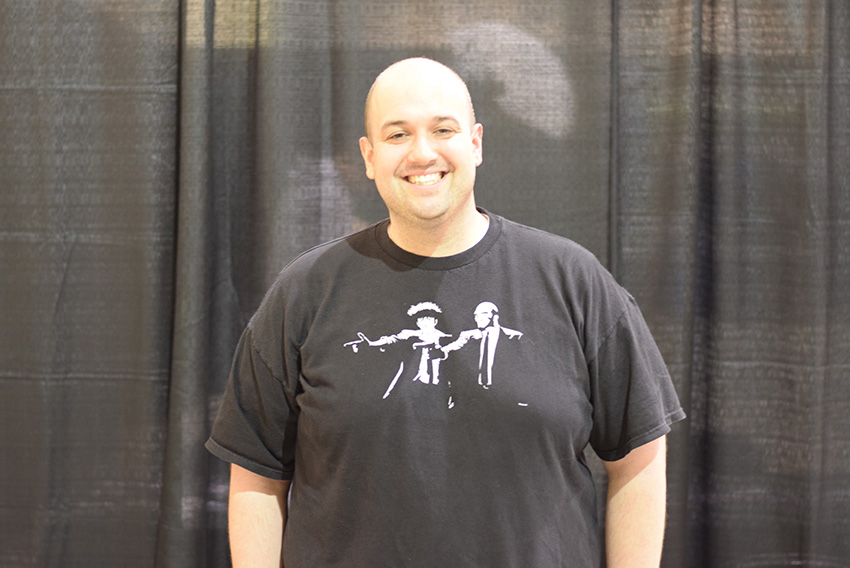 Jimmy Tessitore, from Herndon, Virginia, started playing Magic twelve years ago, and counts a handful of Grand Prix day twos as his Magic accomplishments. He played Mardu Vehicles in Standard because he loves Heart of Kiran, and he carried his aggressive sensibilities into the draft, where he put together a red-white dinosaurs deck with two copies of Sky Terror.

Colron Chambers, from Montclair, New Jersey, started playing Magic during Unlimited, but took step back from the game during Ice Age and then returned in M15. He too counts making a few Grand Prix day twos as his Magic accomplishments. He played Black-Red Vehicles in Standard, a deck that sometimes allowed him to cast two Bone Pickers on turn two. For the last three rounds Chambers drafted an Esper treasure-themed deck with Revel in Riches.

I interrupted the interview. “Wait, you drafted Revel in Riches?" 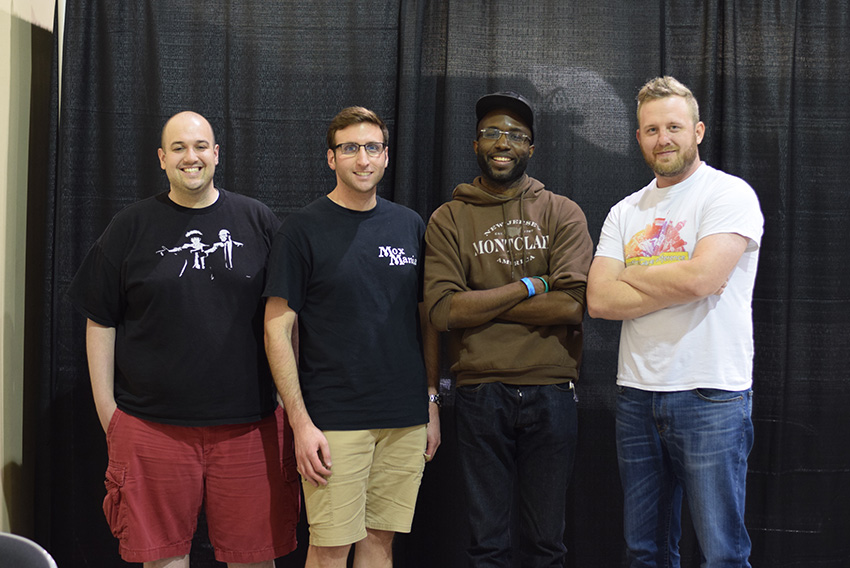 Congratulations to the five Day 1 undefeated players of U.S. Nationals!