Round 6: Brazil vs. Malaysia

Brazil entered the World Magic Cup as one of the odds-on favorites to win the tournament. With Hall of Famer Paulo Vitor Damo da Rosa and Pro Tour winners Carlos Romão and Lucas Esper Berthoud on the team, the Brazilians were one of the best teams by far on paper.

But, as they say, there's a reason we play the games, and Brazil hadn't had much fortune in those, struggling to a 1-3 start that left their backs up against the wall early.

It was a surprise to everyone—not least of all Team Brazil themselves—that they were in this position, but after winning against Belarus in Round 5 to stay alive, they squared off against Team Malaysia, desperate to claw their way back into the tournament. 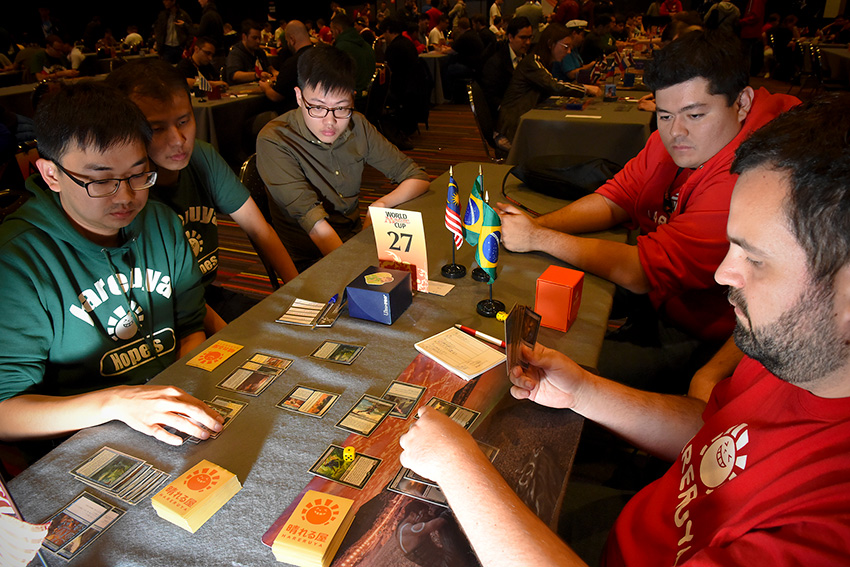 Round 6 of the World Magic Cup featured a tense match, as powerhouse team Brazil found themselves on the back foot as they squared off against Malaysia, tournament life at stake for both trios.

It was the last that finished first, as a mana-light Wee struggled to cast meaningful spells against the Hall of Famer, and Da Rosa put his team on the board with two lightning-fast victories that promised hope that the Brazilian super-team could fight their way out of the hole they had dug.

Unfortunately, Berthoud and Romão were falling further into it, as both dropped their first game. While their team stood just one match win away from advancing, their backs were up against the wall to make that happen.

Fortunately, an early Authority of the Consuls was exactly what Romão needed to slow down Lim, and it looked especially good as a pair of Earthshaker Khenra were stalled right in their tracks thanks to the enchantment. Curator of Mysteries followed for the Brazilian, and after Lim exhausted resources to get the flier off the table, Fumigate came along to clear the path for Abandoned Sarcophagus, which threatened to give Romão the room he needed to take over the game thanks to the host of cycled cards resting in his graveyard. 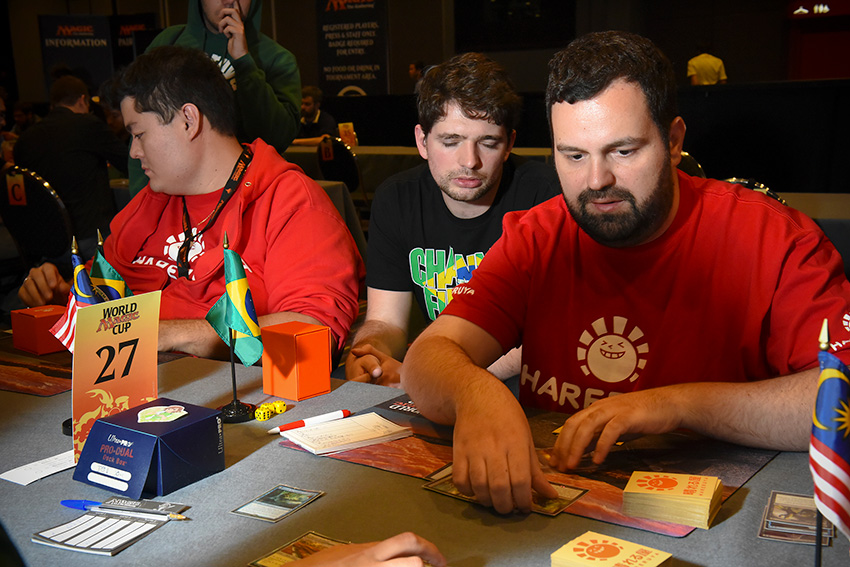 Damo da Rosa sat in the middle to offer advice when needed, as Romão to the left and Berthoud to the right pressed on.

But Lim wasn't out of it yet. Abrade removed the artifact and Hazoret the Fervent followed. With the value engine off the table, there was a path back into the game for the Malaysians. Fortunately for Brazil, the Pro Tour champion followed up with Drake Haven, and a few cycles later had an army of Drakes to even the count.

Meanwhile, Berthoud and Soh were locked in a battle of resources, as Baral, Chief of Compliance allowed Soh to sculpt his hand while Berthoud was drawing extra cards off Glint-Sleeve Siphoner. The key play came when The Scarab God resolved for Berthoud, giving him enough threats to finish off Soh before he could find Approach of the Second Sun.

As the duo shuffled up for a third game that may or may not be relevant, Romão was in search of a third land that most certainly would be. While Authority of the Consuls was buying him extra time, Rampaging Ferocidon shut down part of the card while the creatures poured in. Romão's frustration was palpable as he continued to cycle for a third land, but when it never came, he was forced to extend his hand shift attention back to the middle for what would be the make-or-break game for both these teams.

And what a game it was. Words cannot do the back-and-forth that was this match justice, but it featured great play on both sides and a wild sequence of draws from both sides that kept the tension at a breaking point throughout.

Berthoud attacked Soh's resources with Kitesail Freebooter and Deadeye Tracker, which meant the Search for Azcanta Soh deployed early would be looking for a long time. Keeping Tracker back to activate, Berthoud continued to poke in with the Freebooter, eventually eliciting a Farm // Market to try and remove it. Berthoud fought back with Dive Down, but Jace's Defeat won the “counterspell” war for Soh, who was rewarded with returning a Disallow to his hand.

The Tracker was causing such a problem for Soh that he decided it was time to go all-in, and he activated Ipnu Rivulet in his upkeep just to guarantee that Azcanta would be found. It was a risky decision that left him vulnerable, but transforming the land was key to his long-term success. Another countermagic fight led to Fumigate resolving for Soh and clearing out Berthoud's creatures, but that looked like small consolation when The Scarab God came as the follow-up.

With a crowd gathered round and the hopes of his country riding on his back, Soh's hands were shaking as he cast a second Fumigate simply to “bounce” The Scarab God back to Berthoud's hand. His plan was to Disallow it on the way back down, but another Kitesail Freebooter made that plan impossible. With the Brazilian followed up with The Scarab God, Soh had to go digging with Azcanta to try and find an answer. Censor was exactly that, and the tapped-out Berthoud watched The Scarab God hit the graveyard for good. 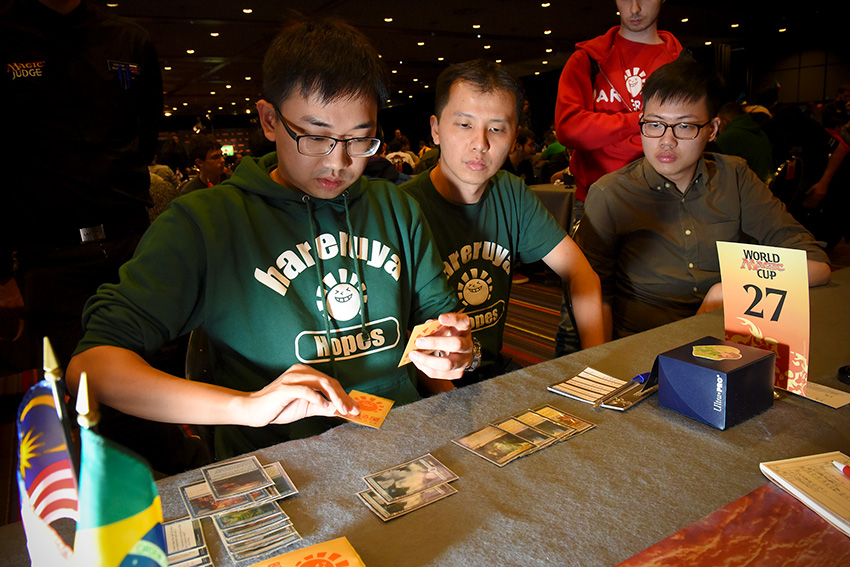 Malaysia fought to hold on, with Joe Soh as the team's hope to remain competing.

With the board at parity, the game rested on a razor's edge. Cast Out off the top of the deck allowed Soh to removal Kitesail Freebooter and get his Disallow back in the process, which he needed as Berthoud cast yet another The Scarab God into the counterspell. Again, Azcanta went digging, and when Berthoud tried his fourth The Scarab God of the game on the next turn, another Disallow was waiting.

Running out of options, Berthoud still wasn't done. Gonti, Lord of Luxury was next, which prompted Soh to activate Azcanta to try and find a counterspell. That search didn't yield the looked-for Negate, but it did turn up Approach of the Second Sun, a threat to end the game. It wasn't to be, as Gonti turned up Cast Out from Soh's deck, and Berthoud played it to get back Kitesail Freebooter and exile the Approach.

Just like that, things had swung back to the Brazilians. But Azcanta dug again—for at least the sixth time of the match—and Cast Out got rid of Freebooter once again, allowing Soh to immediately play Approach of the Second Sun. Two turns later with no way to prevent the rising sun, Berthoud extended his hand and congratulated Malaysia for winning the match and keeping their tournament hopes alive.

Shockingly, just like that, the Brazilians were done, proving that anything can happen at the World Magic Cup.