There were a handful of super-teams at the World Magic Cup. From the Brazilian team of Pro Tour winners, to the American team that featured Reid Duke and Gerry Thompson, to the Japanese of all-stars, there were certainly teams that, on paper, were favorites to cruise through the competition.

None of them did so with the ease of Germany, who thanks to some innovative deckbuilding choices had performed better through the first two days than any of the super-teams. Much of that credit goes to captain Marc Tobiasch, who was the mastermind behind much of the team's deckbuilding choices, which included being the only team to bring two "traditional Hazoret decks" to the tournament in the form of Mardu Vehicles and Ramunap Red, along with the expected Energy deck, though that too was innovative by leaning hard toward control with Glimmer of Genius and Torrential Gearhulk. But the risks had paid huge dividends, as Germany tore through the field on their way to the semifinals.

But Poland was no slouch, a team that a few months ago most prognosticators wouldn't have given a second thought, to their detriment. Led by Grzegorz Kowalski, he is joined by Piotr Glogowski—who is fresh off his first Pro Tour Top 8 appearance in just his fourth PT appearance at Pro Tour Ixalan—and Radek Kaczmarczyk. The Polish trio have been solid competitors at high levels for a while. All three have win rates above 60% at Grand Prix, typically a very high mark. 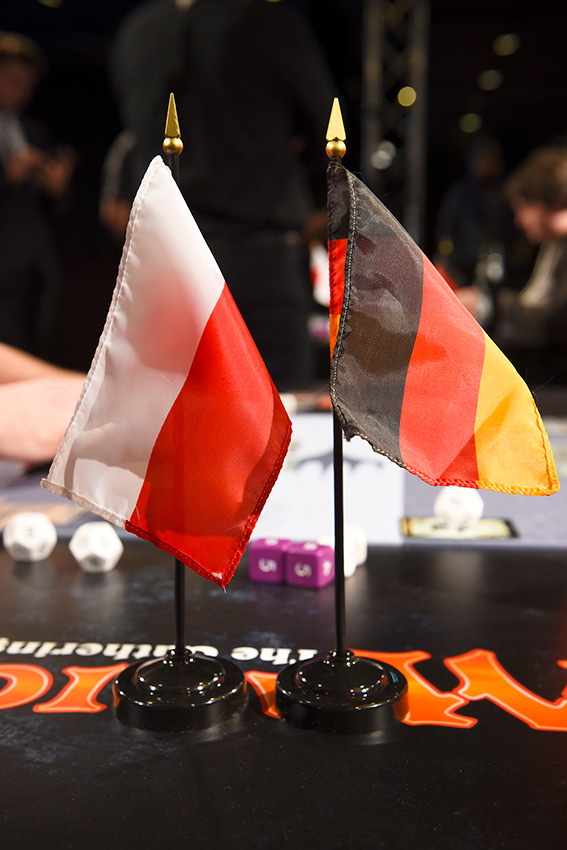 Germany has been the team to beat all weekend, and Poland has been the only one to put a scratch on them in the second stage of Day Two's pool play. Would Poland be able to repeat in the semifinals?

Still, they were most certainly the underdogs as this battle for the finals began.

For the second match in a row, Poland faced a red mirror on the third table, as Kaczmarczyk squared off against Moritz Templin's own Ramunap Red. The quarterfinals match against Wales had been against Desert Red, and Kaczmarczyk fell in short order to the bigger deck sporting Sand Stranglers. Templin also had access to the newfangled Flametongue Kavu, though three of his four resided in the sideboard. Which, it turned out, Templin had access to very quickly, as Kaczmarczyk overran him with a pair of Earthshaker Khenra follow by double Cut // Ribbons.

That fast game was nearly matched by Germany's Krieger on Table A, whose Mardu Vehicles deck ran roughshod over Glogowski's White-Blue Cycling deck.

That sent things to the middle table, where Tobiasch was locked in the Energy mirror against Kowalski. It was Rhonas the Indomitable that shined brightest in the match, teaming up with a very large Bristling Hydra to give Kowalski a momentum-clinching victory as the three matches wrapped up the first game.

But Germany struck back quickly, with Krieger dispatching Glogowski to put his team up a match win and in need of just one more to end things. When Templin found his all-important Sand Stranglers to win Game 2, suddenly Germany stood on the brink of clinching the match for the Germans. 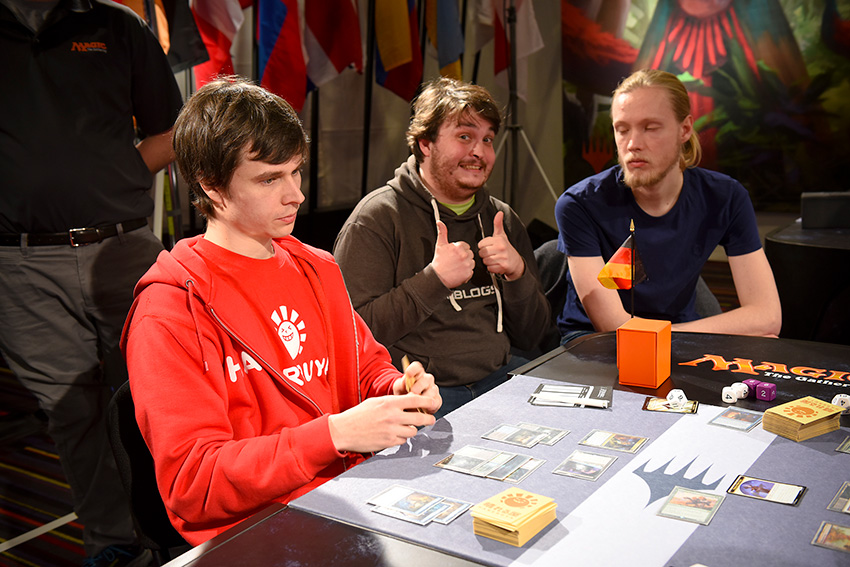 Led by captain Marc Tobiasch, Germany entered Sunday at the top of the standings and with an unconventional team line-up that included aggro decks that competed for card options.

Templin's hand for the third game was removal and Hazoret the Fervent, a very powerful opener. He took some damage, but he ripped through Kaczmarczyk's creatures and even sniped a Bomat Courier while Kaczmarczyk was tapped out. When Hazoret arrived on turn five and Templin passed with two cards in hand and a Mountain open for a possible removal spell, things looked like they might be ready to end, and Poland took a long time to huddle up and discuss whether or not to attack with the team.

In the end, they went for it. And it paid off, as Templin was revealed to have just two lands in hand, meaning Hazoret was unable to block. The attack took him down to 2 life, and when the next draw step failed to yield an answer, things were back to Table B for what would be a deciding third and final game. 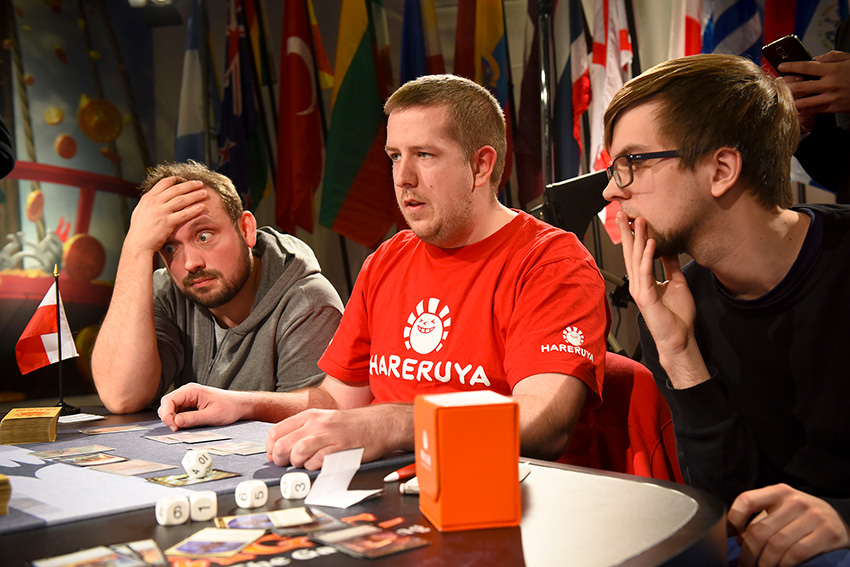 Featuring three solid players including captain Grzegorz Kowalski, Team Poland had the trophies in their sights.

As Kowalski drew his opening hand, he could barely hide his happiness with the draw. And as the first few turns played out, it was all Tobiasch could do to even survive, as Servant of the Conduit was followed by Whirler Virtuoso and then Bristling Hydra and then a pair of Longtusk Cub. Tobiasch stalled as best he could with Vraska's Contempt and was able to trade Torrential Gearhulk for the giant Hydra, giving him a possible path back into the game even as his life dwindled.

But his deck didn't cooperate. With nothing but lands and a Negate in hand and staring down a small army of Thopter tokens, there was nothing Tobiasch could do but his extend his hand and congratulate Poland on moving on to the finals of the World Magic Cup.

Team Poland defeats Team Germany and advances to the finals!

2 Chandra, Torch of Defiance 3 Gideon of the Trials