Earlier today in the quarterfinals, Italy had defeated China while Japan had defeated Austria. Now they were locked in a match to decide who would advance to the finals and who would be eliminated.

Japan was one of the favorites going into the event. Their team featured 1,195 lifetime Pro Points combined, which is just a staggering number. Most of those came from Yuuya Watanabe and Shota Yasooka, the two Hall of Famers on the team, but their National Champion Kenta Harane also contributed 69 points. To put that into perspective: There are only 25 players in the entire history of the game who had collected more lifetime Pro Points than Team Japan's average.

Italy was in their third semifinals appearance in a row, and no other country has even come close to such stunning consistency. At the 2015 World Magic Cup, Italy took the title. In 2016, they fell in the semifinals. This year, they were trying to clinch first place once again. And every single time, Andrea Mengucci was on the team to represent his home country. 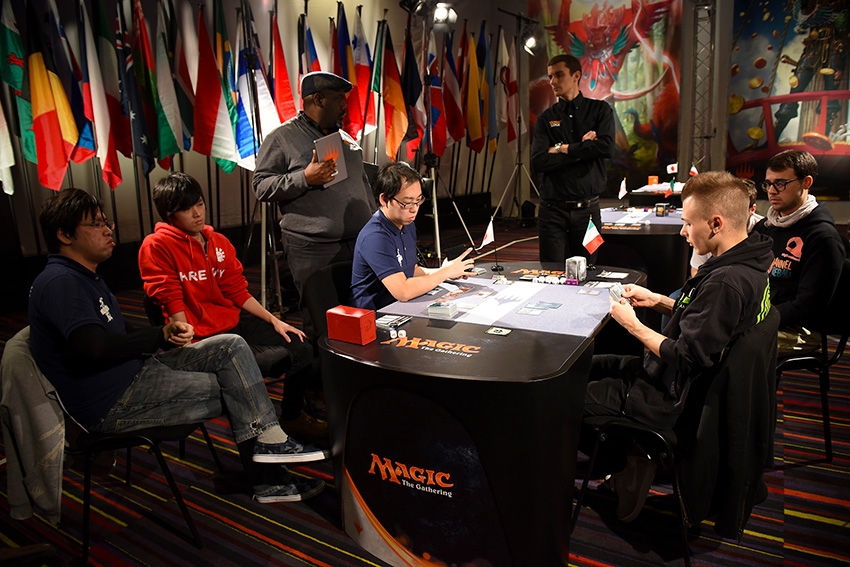 While Japan may be arguably the most powerful team remaining judging by stats alone, it was Italy that has become the only team to Top 8 the World Magic Cup in three consecutive years. This made for an unforgettable semifinals.

Before the match, after Mengucci figured out that Italy got to choose play or draw in all of their matches due to their performance in the first two days, Yasooka jokingly asked if the Italians would like to be on the draw. They declined.

"Good if we're on the play," Yasooka laughed.

Despite the high stakes, the atmosphere was relaxed.

Watanabe dismantled Mengucci in shockingly quick fashion. I was standing right there in the feature match area to watch, and I still nearly missed it.

In Game 1, Watanabe played Servant of the Conduit on turn two, Chandra, Torch of Defiance on turn three, and Vraska, Relic Seeker on turn four. That did not end well for Mengucci.

In Game 2, Mengucci had to take his self-professed first mulligan of the tournament and ended up keeping a hand comprised of almost entirely green cards, an Island, and an Aether Hub. He never drew another green source, discarded to hand size, and lost to Watanabe's sufficient arrangement of creatures.

The set of games on the C seat took much longer and was much closer.

In Game 1, Moscata curved out by using his mana on turns one through four, deploying threat after threat. Harane tried to set up his graveyard with Minister of Inquiries, but he was unable to live the dream of Refurbishing a God-Pharaoh's Gift on turn four. Even if he had, it might not have been good enough since Moscato had Rampaging Ferocidon to weaken a potential Angel of Invention, and the red deck took the first game. 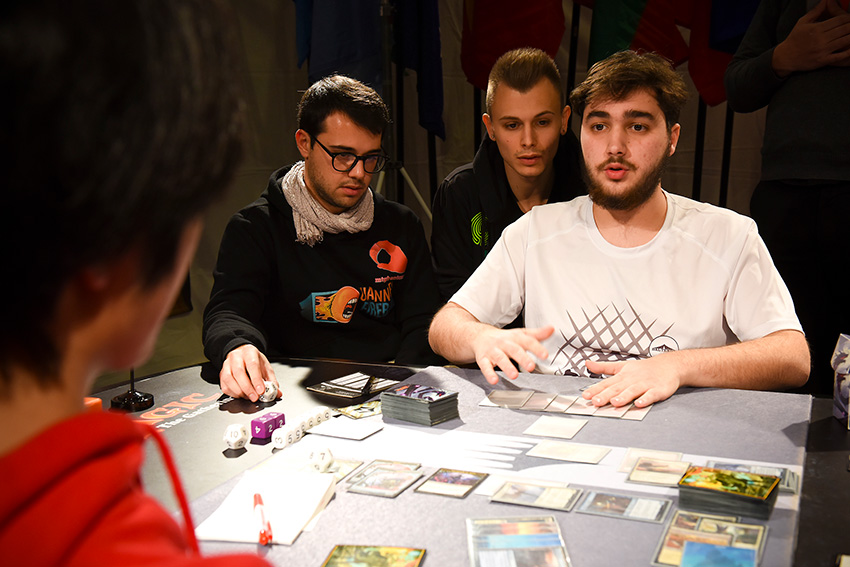 The two titan countries of the feature match stage began to trade blows, as Moscata of Team Italy looks to regain lost ground with the help of his teammates.

In Game 2, the white-blue deck had morphed into a fair control deck. Harane lined up some early trades to stay alive, used Cast Out to exile Rampaging Ferocidon, and took over once he hit five mana. Angel of Invention and multiple copies of Angel of Sanctions allowed Harane to take control of the battlefield, and eventually the Angels went on a victorious offense.

In Game 3, the red deck was on the play again. Moscato curved out beautifully, using up all of his mana in the first three turns of his game and putting Harane down to 13 life. It didn't look great for Harane, who passed on his fifth turn at 4 life with Angel of Invention and two Servo tokens on the battlefield. Moscato, whose board consisted of two Soul-[autocard]Scar Mage[/autocard] and Kari Zev, Skyship Raider, eternalized Earthshaker Khenra, targeting a Servo token with its enters-the-battlefield ability. This forced Harane to chump block with his Angel of Invention while taking a bunch of damage. It didn't look great for the Japanese player, who fell down to 1 life soon after. But Harane held on by a thread, and started to mount a comeback. Thanks to multiple Angel of Sanctions, he took control of the board, and then he went on the offense.

Moscato now only had a few turns to find a burn spell. Shock or Lightning Strike would be enough. So would Ramunap Ruins or even Sunscorched Desert. In a way reminiscent of Craig Jones' famous Lightning Helix top-deck, Moscato flipped over the top card of his deck. To his relief, it was a lethal Lightning Strike!

That ending was as close as it got, but Moscato managed to secure his games for Italy, tying the team score at 1-1.

Yasooka stepped out of his own comfort zone for the benefit of his team, picking up Ramunap Red rather than a control deck. At least his trusty Guru lands gave him some comfort. And his years of playing control made it possible for him to know how to play against control decks: "It was pretty easy to guess what the opponent was holding and what his game plan was, so I could just relax and play," Yasooka said after the match. 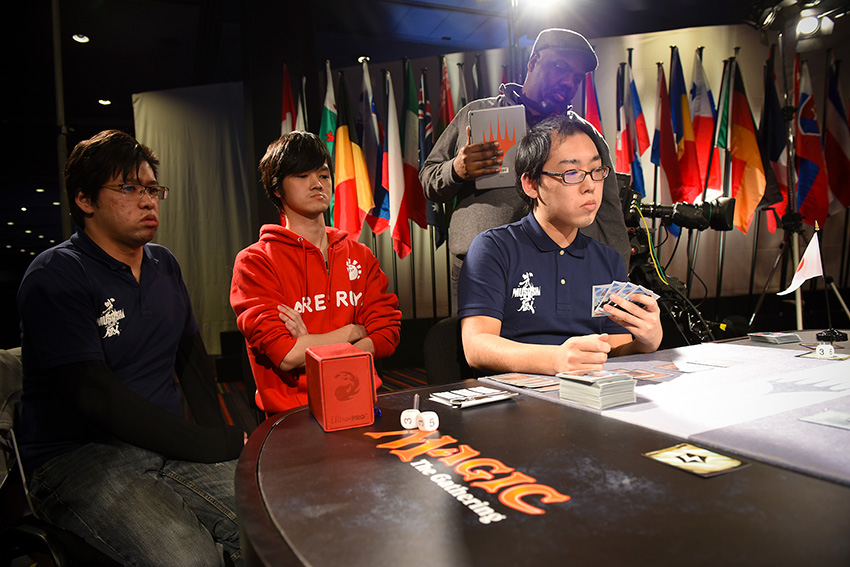 Teammates looked on as they let Yasooka—a true master—navigate a little role reversal in the deciding match.

In Game 1, Yasooka made a heads-up play by casting Harsh Mentor rather than Ahn-Crop Crasher on turn three. He knew that against control decks who may be holding countermagic or removal, it's sometimes better to deploy your second-best threat. It worked, as Rizzi spent his removal on Harsh Mentor and was left without an answer to Ahn-Crop Crasher, which attacked for lots of damage over the course of the next few turns. It wasn't good enough, though, as eventually Rizzi untapped with The Scarab God at 11 life, and there's no way that Ramunap Red can come back from that position. Yasooka agreed and reached for his sideboard.

In Game 2, Yasooka curved nicely out with Soul-[autocard]Scar Mage[/autocard], Kari Zev, Skyship Raider, Pia Nalaar, and Rampaging Ferocidon. Rizzi, who was on the draw with a deck that was not good at playing from behind, quickly fell down to 4 life while facing four creatures. Even Torrential Gearhulk wasn't good enough at that point, and Yasooka evened the score.

In the deciding game, Rizzi chose not to play Fatal Push on Yasooka's turn two Kari Zev, Skyship Raider. Instead, he used his life total as a resource in an attempt to get maximum value out of his Bontu's Last Reckoning. Rizzi's Fatal Push, whose revolt clause was satisfied via Field of Ruin, eventually destroyed Aethersphere Harvester, while Kari Zev, Skyship Raider was swept up along with two other creatures by Bontu's Last Reckoning. It was a well-played game by Rizzi, and when he used Torrential Gearhulk to flash back Vraska's Contempt, it looked very good for Italy.

But Yasooka destroyed the 5/6 with Abrade, and Rizzi started to flood out. Given that his deck was land-heavy and filled with cards that traded on a one-for-one basis, he needed a card advantage engine like The Scarab God or Azcanta, The Sunken Ruin to secure the game, and he didn't find any of them. Yasooka, with some careful threat management, eventually sent in his red creatures for lethal. Like last year, Italy fell in the semifinals.

Team Japan defeated Team Italy 2-1 and advanced to the finals!