Japan and Slovakia had both won their first round in their second-stage pool, which meant that they now faced off in a win-and-in match. The winner would advance to the Top 8; the loser would have to win the next round or face elimination.

Japan was one of the favorites going into the event. Their team featured 1195 lifetime Pro Points combined, which is just a staggering number. Most of those came from Yuuya Watanabe and Shota Yasooka, the two Hall of Famers on the team, but their National Champion Kenta Harane also contributed 69 points. Bizarrely, however, their country had a hideous record at the World Magic Cup, as they had only made Day Two once before.

In contrast, Slovakia had a much better history at the World Magic Cup: They had made the Top 8 in 2012 and 2014. Both times, Ivan Floch was on the team, and this year he was the captain once again. "This is my event. Every year I'm here, and I love it," he said. While Floch had won just about everything in the game (Team World Champion in 2010, Grand Prix Champion in 2012, and Pro Tour Champion in 2014) this was the first big-stage event for teammates Peter Snoha and Ondrej Kedrovic.

The match between Shota Yasooka and Peter Snoha was over quickly, and although it was unusual to see noted control master Yasooka attack with Bomat Courier and Earthshaker Khenra, his aggressive draw put Snoha down to 2 life fairly quickly. Snoha, who was unable to Refurbish a God-Pharaoh's Gift on turn four, instead tried to sweep the board with Fumigate, but Yasooka responded with a lethal Lightning Strike. In the subsequent mid-round deck check, the judges found that Snoha was playing double-faced cards in transparent sleeves and issued a game loss for marked cards. This meant that the first set of games went to Japan.

On the other side of the table, a similar matchup was going on in reverse: Kenta Harane's White-Blue Gift deck faced off against Ondrej Kedrovic's Mardu Vehicles deck. In both games, Harane's deck stumbled somewhat, never getting a God-Pharaoh's Gift on the battlefield and occasionally missing land drops as well. Kedrovic, with some helpful pointers from his team captain, didn't give Harane any chance to recover. Toolcraft Exemplar, Scrapheap Scrounger, and Heart of Kiran showed no mercy and soared in for a quick kill. 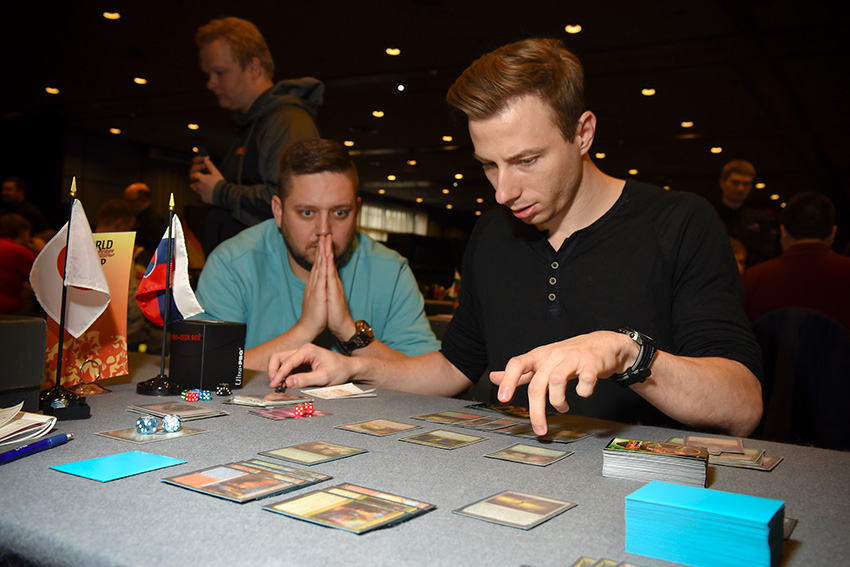 Ivan Floch's match became the decider for the Slovakian team on whether this round pushed them through.

It all came down the middle seat, which was a Temur Energy mirror between two titans of the game: Slovakia's Ivan Floch and Japan's Yuuya Watanabe. In Game 1, Floch was able to protect his Chandra, Torch of Defiance for several turns, which turned out to be key. When Watanabe eventually dealt with the Planeswalker, he had to exert too many resources to do so and was eventually left without an answer to Floch's Glorybringer. In Game 2, Floch was able to get a reasonable battlefield presence early on before facing The Scarab God. He had no permanent answer, but he did have Harnessed Lightning and River's Rebuke. He used them as over-costed Unsummons, which gave him enough of a temporary advantage for his team of creatures to attack for lethal.

As soon as Watanabe extended his hand in defeat, an exuberant Snoha hugged Floch, and a large smile appeared on Floch's face. "I believe this is the first time I've won against you after so many losses," he told Watanabe, who nodded respectfully. You've got to get those wins when they count. 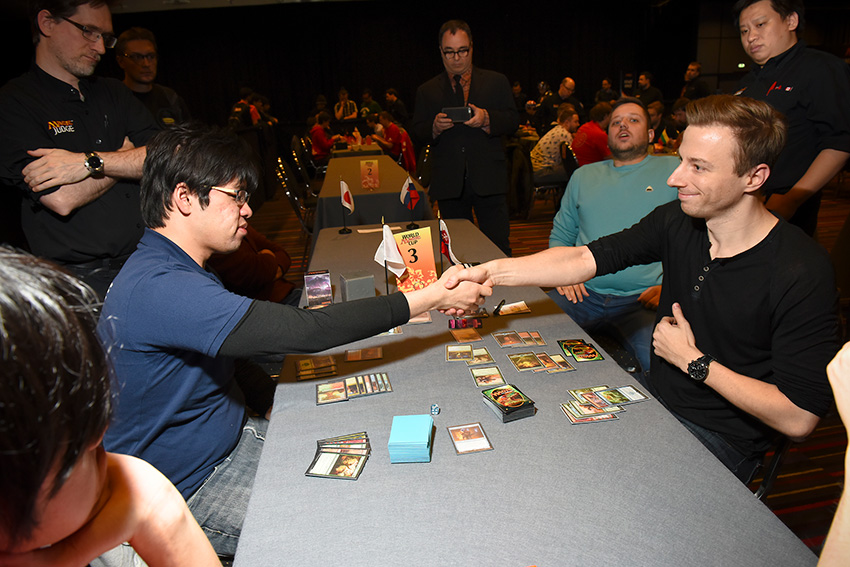 While Japan had one round left for their shot at the Top 8, Slovakia rests easy after their match, locking up their spot on Sunday.

Then he turned to his teammates. "You're going to the Pro Tour!"

For Peter Snoha and Ondrej Kedrovic, the Pro Tour invitation that accompanied their Top 8 was their first, and for Slovakia, these additional Pro Tour qualifications were a big deal. "For the past few Pro Tours, I've been the only Slovakian on the Pro Tour," Floch said, "and suddenly there will be four in Bilbao. These two, and one more player who qualified. It's a small country, so it's great."

Finally, I asked the team what the key to their success was weekend. "Good captain!" Snoha and Kedrovic shouted in unison.

"That's definitely not true," Floch laughed, "It's a team event—I can't do it alone, I really can't."

"But having a great captain like Ivan helps a lot," Snoha said. "I haven't been playing for a long time—this is my first big event—and this is awesome. All thanks to Ivan. And Ondrej because he won so many games."

Indeed, it was Ondrej Kedrovic and not Ivan Floch who carried the team in the majority of the rounds. In a team event, you do it all together, and Slovakia will try to keep that spirit alive for tomorrow.