As play began late in the day at the World Magic Cup, two teams that had become darlings of the tournament squared off with nothing less than a Top 8 berth on the line. Both Team China and Team Wales had accomplished players on their squad, but neither was exactly comprised of battle-hardened Pro Tour veterans like many of the tables around them playing for a Top 8 berth, and both teams were making waves at the World Magic Cup.

Wales stole the heart of viewers and competitors alike with their dragon-themed onesies to celebrate the Welsh flag, and after advancing easily to Day Two, they ascribed another benefit to the costumes that won the Spirit Award: Opponents underestimating them.

Here, playing for the Top 8, China was unlikely to do that, but with just five Pro Tour appearances between them, Philip Griffiths, Sam Rolph, and Aaron Boyhan were undoubtedly one of the biggest surprises of the tournament.

China, on the other hand, is a country that has found sporadic success in the past—they were team World Champions in 2009—but were one of a handful of teams to have never advanced to Day Two of the World Magic Cup before this weekend. Captain Liu Yuchen and National Champion Lu Chao are both on the team for the second time, and after so many near-misses in the past, came to Nice, France ready to write a new chapter in the Chinese Magic history books alongside teammate Gao Tan. 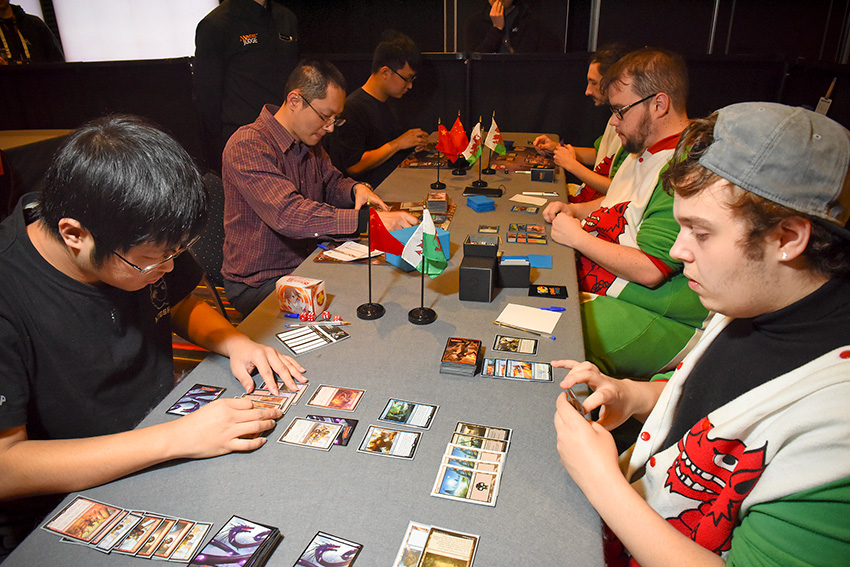 Neither China nor Wales expected to make it this far, and in the second to last round before the Top 8, both countries found themselves one win away from Sunday.

Both teams had inspiring stories. Both teams were on the verge of a Top 8 that neither had expected entering the weekend, and after the first two tables split their matches, the final game between Liu and Rolph was one that most certainly lived up to the drama of the moment.

Rolph was piloting Blue-Black Control, while Liu was on Ramunap Red, traditionally an extremely difficult matchup for the control player, but thanks to some tight play and a stream of Torrential Gearhulk on Vraska's Contempt, Rolph managed to steal the first game with just 2 life to spare.

Predictably, the Red deck just ran over him while on the play in the next game, sending the pair into a decider as both teams gathered around the match that would set their fates.

Liu's creatures pressured Rolph's life total early, but as the removal began to mount and Sorcerer's Spyglass locked down Chandra, Torch of Defiance, things began to get a bit more dodgy. Still, a stream of Deserts in the form of Sunscorched Desert, Scavenger Grounds, and Ramunap Ruins meant that with Rolph's life down to 5, he had a path to victory.

Things changed slightly as Torrential Gearhulk targeting Vraska's Contempt meant that Liu had to pop the Scavenger Grounds in response to remove the threat of lifegain, and the Gearhulk also awarded Rolph an attacker. It was a curious one, though, as he directed it at the Chandra already being locked down by the Spyglass.

The reasoning became clear as the front half of Consign // Oblivion from Rolph bounced his own Spyglass, redeploying it to name Ramunap Ruins. It was a nice play, and one that looked like it might pay off, but another Sunscorched Desert brought Rolph down to just 4 life, and Pia Nalaar presented a threat to finish things off. With just a Gearhulk back to block, the Thopter was a threat Rolph needed an answer to as he drew for his turn.

That draw? Just a Swamp. After a few moments of consideration, Liu went in on pumping the Thopter, and a few seconds later ,the Top 8 celebration was on.

Team China winning in dramatic fashion to advance to the Top 8 at the #mtgwmc pic.twitter.com/gRJfgVH9i0

Not bad for a team that had never even made Day Two.

"There was some pressure having never made it past the first day before, but after we did that, I was thinking we could at least play until lunch today," Liu laughed after the match. Then, when we advanced, I thought we would at least get to play a few more rounds, but I didn't expect this. Everyone watching at home is going to be really excited for us."

Liu may be a Pro Tour regular, but with the win, his teammates earned more than just the Top 8 berth at the World Magic Cup. They earned invitations onto the Pro Tour, the first for Gao. With the realization setting in as the cameras flashed around them, the normally stoic team was finally ready to let loose.

"I guess he [Liu] qualified us for the Pro Tour," Lu joked as they celebrated. "That's what a team captain is supposed to do!"