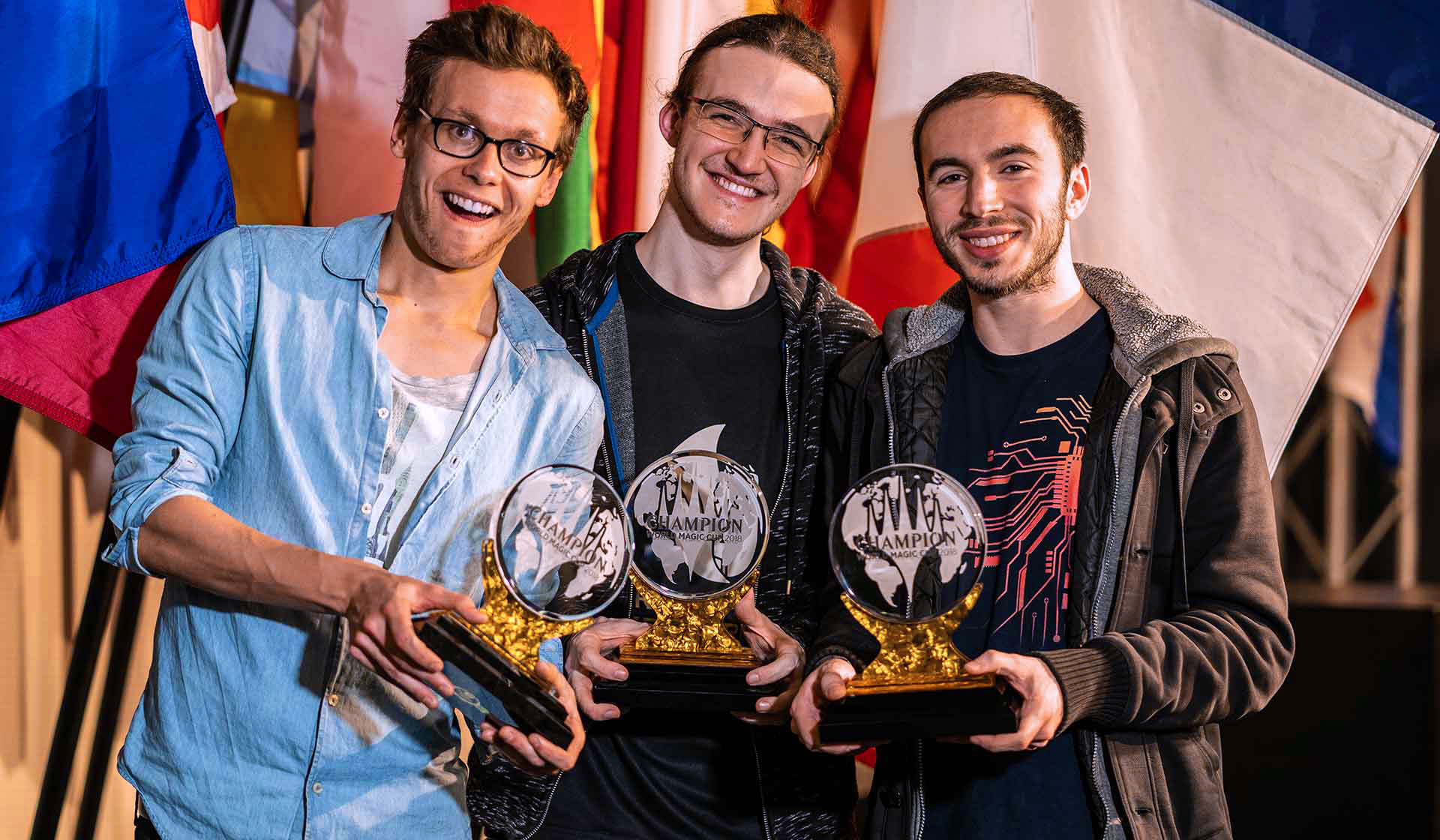 The hashtag for the 2018 World Magic Cup is #MTGWMC. Join the conversation.

See the 2018 World Magic Cup as it unravels on the Magic: The Gathering Facebook page!

Led by Depraz, one of the 32 players in the kick-off of the Magic Pro League, France’s journey to Sunday had only minor harrowing moments, as the team of France’s new era of Magic players cruised through the first day, and was one of the first four teams to secure their slot in the playoffs after winning the first two matches of their second stage of play on Saturday.

Sunday featured epic showdowns against countries with World Magic Cup winning accolades. France first had to best Japan in the quarterfinals before dispatching Team Italy—who made it to the Top 8 for the fourth consecutive year—in a nail-biter series of matches that hinged on Hocquemiller’s final game and an utterly explosive Fight With Fire. In the finals they fought against Team Israel, where they secured two wins before the third match could play out in full, securing France their second World Magic Cup title.

Congratulations to Jean-Emmanuel Depraz, Arnaud Hocquemiller, and Timothée Jammot on their hard-fought victory this weekend, and to France for taking top honors for a second title home!

The 2018 World Magic Cup featured 74 countries, three days, and some memorable stories that defined the weekend as nations both large and small came to Barcelona with one major goal—taking home...

The Key Moments of the Finals: Israel vs. France by Frank Karsten

It all came down to this. To get to the final match of the tournament, Israel had defeated China in the quarterfinals and Hong Kong in the semifinals. France's road was arguably even more...

The semifinals featured four powerhouse teams, each captained by a member of the new Magic Pro League. Despite all the star power, only two teams could advance to the finals. ISRAEL DEFEATS HONG...

On Friday morning, 74 teams started. After three rounds of Team Sealed and ten rounds of Team Unified Standard, only eight teams escaped the carnage. Their Top 8 performance came with invitations...

Team Unified Standard brings about a unique deck-building challenge for teams, and the 2018 World Magic Cup challenged countries in bringing the best three-deck configuration. Check out what each...

Only eight countries remain in the 2018 World Magic Cup. Hong Kong, Italy in their fourth consecutive Top 8, Japan, Israel, China, France, Australia, and Slovakia will all return Sunday starting at 9 a.m. local time (12 a.m. PT/3 a.m. ET/8 a.m. UTC) on Sunday to see who will take home the trophies and their share of $250,000. Tune in to twitch.tv/magic starting Sunday to see it all live.

On Friday morning, 74 teams started. After thirteen rounds, only eight teams remained in the running. Their Top 8 performance came with invitations and airfare to the upcoming Mythic Championship...

Team Denmark and Team Italy are two of the six countries to have won a previous World Magic Cup, and they are the only two teams this year to field a returning winner. For Italy, this was Andrea...

Team Denmark and Team Italy are two of the six countries to have won a previous World Magic Cup, and they are the only two teams this year to field a returning winner. For team Denmark, this was...

Four match wins was the minimum requirement to advance to Day Two, but with the ruins of Day One behind us, a number of high-profile teams were left in the dust. For the first time in history,...

The World Magic Cup is the only tournament where you're playing for your country. Intricate Team Sealed Deck construction and Team Unified Standard puzzles notwithstanding, the tournament is...

After starting with three rounds of Guilds of Ravnica Team Sealed on Friday morning, the format for all remaining rounds of the 2018 World Magic Cup was Team Unified Standard. I have a breakdown...

2018 World Magic Cup Invitation List by Wizards of the Coast