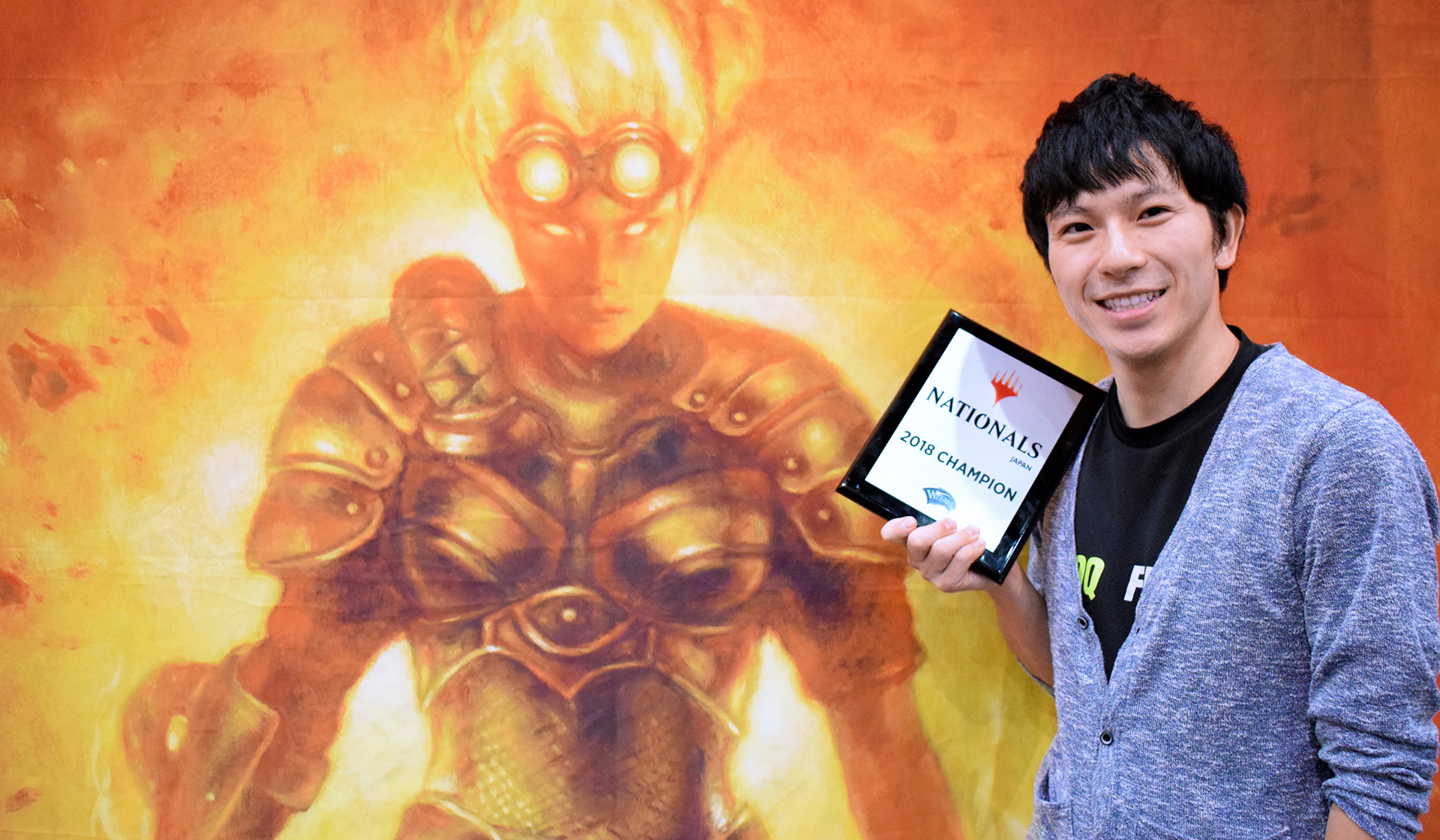 Masahide Moriyama became the National Champion of Japan by defeating Naoya Nanba in the finals. Both players will accompany (11) Ken Yukuhiro to the upcoming World Magic Cup in Barcelona.

Watch recorded coverage of the 2018 Japan Nationals following the conclusion of GP Detroit each day on twitch.tv/magic!

THE HASHTAG FOR THE 2018 JAPAN NATIONALS IS #MTGNATIONALS. JOIN THE CONVERSATION.

811 challengers arrived in Shizuoka in an attempt to earn a spot on the Japan National team. This was the largest Nationals tournament in the world, making it anything but an easy ride to the top.

After sixteen rounds of intense competition, it was Masahide Moriyama who remained the last man standing. Hoisting the trophy and earning the title of National Champion for himself, Moriyama will also represent Japan at the upcoming World Magic Cup in Barcelona. The finalist, Naoya Nanba, also earned a spot on the team as the finalist of Japan Nationals 2018. This stellar performance came just six weeks after he made the Top 8 at Grand Prix Chiba.

The two will be accompanied by Japan's top Pro Point earner, 11th-ranked Ken Yukuhiro. Yukuhiro dominated the tournament by going 10-0 and swooping into the Top 8. In the quarterfinals, he even had to defeat Yuuya Watanabe to advance.

Not only did Watanabe-san make back-to-back Nationals Top 8s, so did last year's National Champion Kenta Harane. Despite narrowly missing the National team, the reigning World Magic Cup Champions, proved that Magic was indeed a skill-intensive strategy game. Rounding out the rest of the Top 8 were So Iwabuchi, Takashi Boku, and Kazuhiro Suzuki!

Congratulations to Masahide Moriyama once again for winning Japan Nationals 2018!

28 countries held their Nationals this weekend, including the mighty nation of Japan. On Saturday, 811 players arrived at the Twin Messe in Shizuoka for their shot at eternal stardom. On Sunday,...

After seven rounds of Standard and six rounds of Core Set 2019 Booster Draft, these eight players advanced to the playoffs. Will their Standard deck help them earn a spot at the upcoming World...

After thirteen rounds of Swiss, the field of 811 was down to just 8! Let's take a look at the Top 8 of the largest Nationals tournament in the world and get to know these talented...

In an 800-player tournament, there’s bound to be a few close misses. These players were one match win, or even one match point, away from cracking the Top 8. In such a huge tournament, making...

After five rounds of Standard and three rounds of Core Set 2019 Booster Draft, only three players out of 811 achieved the coveted 8-0 record. Steamrolling their way past hundreds of other competitors were Japan’s Pro Point leader (11) Ken Yukuhiro, and two relative-unknowns So Iwabuchi and Ryoko Kitajima.

Close behind at 7-1 were several luminaries, such as Shuhei Nakamura, (19) Yuuya Watanabe, Kenta Harane, and Chikara Nakajima. There were also several big names with a 6-2 record, such as Shintaro Ishimura, Kentaro Yamamoto, Kenji Tsumura, Riku Kumagai, (21) Shota Yasooka, Ryoichi Tamada, and Kazuyuki Takimura!

Tomorrow, competitions will partake in yet another Booster Draft, followed by two more rounds of Standard before the Top 8 cut. A couple more elimination rounds will determine who goes to the World Magic Cup in Barcelona, while a final showdown will determine the Japan National Champion!

If you’re interested in jumping in on some of the action, head over to www.twitch.tv/mtgjp for live Japanese coverage, or watch the timeshifted coverage (with English commentary) at www.twitch.tv/magic after coverage of Grand Prix Detroit concludes!

The path to the World Magic Cup begins in Shizuoka with Japan Nationals. As the reigning World Magic Cup Champions, all eyes fell upon the Land of the Rising Sun to assemble yet another killer...