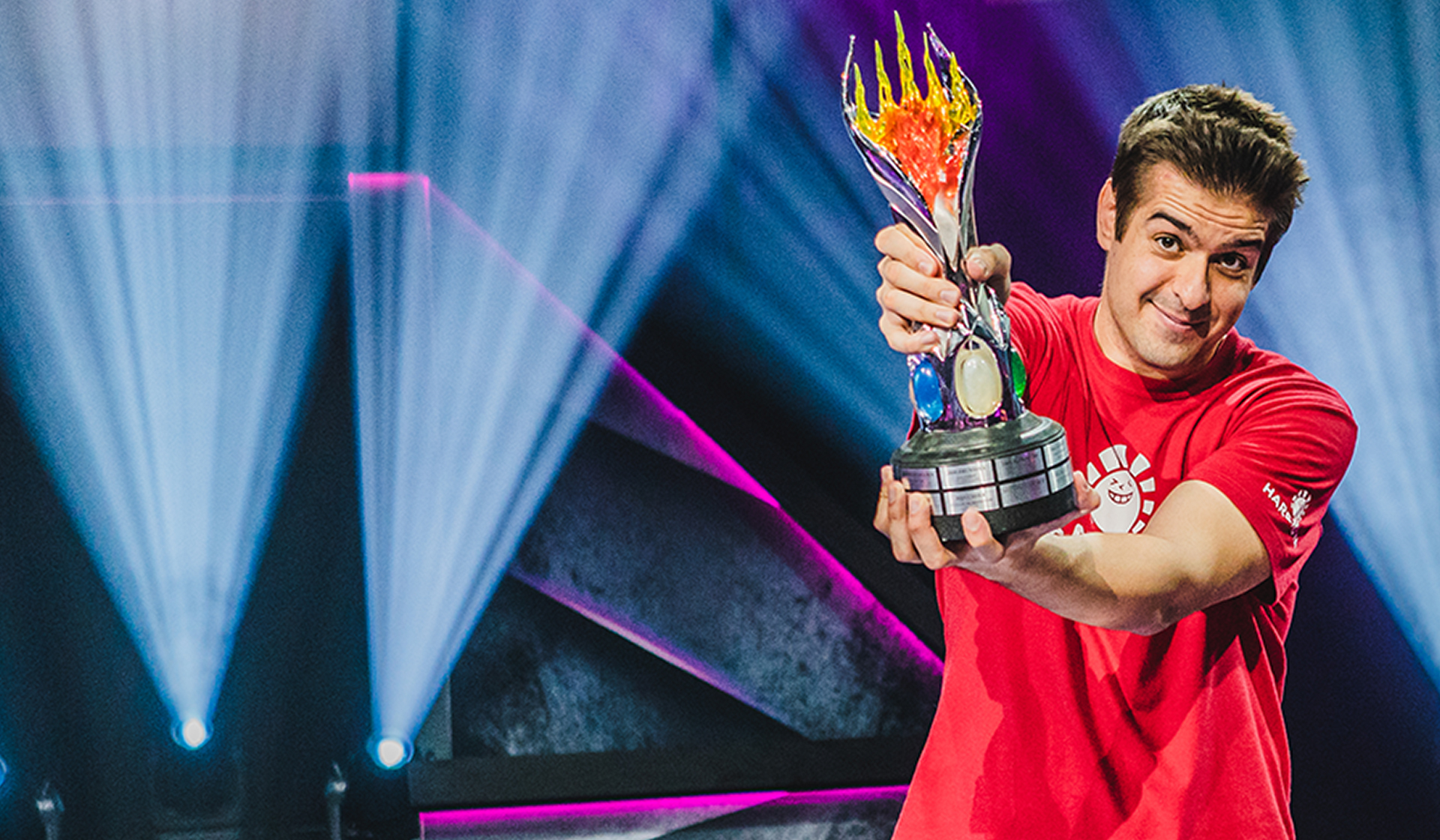 Javier Dominguez topped his 2017 Magic: The Gathering World Championship finals performance, winning the 2018 tournament along with $100,000!

The hashtag for the 2018 World Championship is #MTGChamp. Join the conversation.

See the 2018 World Championships as it unravels on the Magic: The Gathering Facebook page!

Qualifying for the Magic: The Gathering World Championship is hard enough, but making the finals of the tournament back-to-back is even harder. For Javier Dominguez, returning to the big stage was just another chance to play some good Magic and to see how far he could get. The long-time competitor from Spain saw 2017-18 as his greatest season yet, where he overcame his Sunday curse not once but twice, culminating in a weekend that would award him his first major title.

His path to the trophy started off Friday and Saturday, where he managed to get ahead of the field by the middle of Day 2 and never let go of the lead. On Sunday he kicked things off against two-time World Champion Shahar Shenhar in the semifinals, where Dominguez conquered the young champion in five games to return to the finals for the second year in a row. There he faced off against Grzegorz Kowalski from Poland, a friend and upcoming teammate, to see who would be go home with the $100,000 first place prize and the title of World Champion.

The match culminated in a fifth and final game of the tournament where Kowalski stumbled, and Dominguez never let go of the lead. The win from Dominguez makes him Spain’s first World Champion, and a redemption after getting so close the year before.

Photos by Drew DeGennaro The 2018 World Championship had it all—the best players in the world, the newest set in Guilds of Ravnica, the biggest stakes, and the biggest stories. Here are the...

A year of Magic competition all came down to this moment. A handful of Pro Tours and dozens of Grand Prix set the incredibly talented field at the 2018 World Championship. Two drafts, fourteen...

For American Ben Stark—Pro Tour Hall of Famer, Pro Tour Paris Champion, famous content writer, often in the conversation for "best Limited player in the world"—the Top 4 appearance at the...

The World Championship every year features the best players from around the globe, the best decks in the chosen format, and some of the most dramatic moments in Magic history. The players in the...

So far this weekend of the World Championship has been about the culmination of the Magic year—sunsetting Dominaria Limited and the Core Set 2019 Standard, before looking to the future. But now,...

When Hareruya Latin and Ultimate Guard Pro Team sat down earlier this week to prep for today's Team Series Championship, the clock was ticking immediately. With the full set revealed just hours...

Headlining the Top 4 is Javier Dominguez, following up his finals finish in 2017 with another stellar performance. He is joined by Grzegorz Kowalski from Poland, a veteran who continues to build on his breakthrough 2017-18 season. At third seed is Ben Stark of the United States, going back-to-back on Sunday finishes following his Top 2 finish at Pro Tour 25th Anniversary. Finally, two-time World Champion Shahar Shenhar returns for a shot at winning an unprecedented third World Championship title.

But before that, we will be crowning our Team Series Champions as Ultimate Guard Pro Team and Hareruya Latin compete in a special Guilds of Ravnica Team Sealed showcase!

Only four competitors remain in the 2018 Magic: The Gathering World Championship. Each of these players will be competing for the $100,000 first place prize on Sunday, September 23. Name:...

The world's very best competitors are battling for their share of $300,000 at the 2018 Magic: The Gathering World Championship. Check out what Standard Constructed decklists they brought to the...

Road to the World Championship: Seth Manfield by Corbin Hosler

Whenever there is talk of the best player in the world, a few names come up. Players who are viewed as technically perfect, players who always have the best decks, the best teammates, all the...

Ken Yukuhiro was disqualified in Round 14 of the 2018 Magic: The Gathering World Championship. In Game 1, Yukuhiro drew a Diamond Mare that should have been in his sideboard. He did not bring...

On the first day of competition, only three players managed to emerge from the Draft portion with perfect records—but because of the slightly different pairing system at such a small tournament,...

The lights were blinding. The cameras everywhere. The crowd around the table overwhelming. With a pair of headphones on and the most important match of Magic in his life in front of him, John Rolf...

For more than a decade now, Japanese Magic has been at the forefront of tournament innovation and skill on the world stage. Whether it was Akira Asahara's Enduring Ideal, or Shota Yasooka's...

"I didn't want to be the first person to ever win Worlds and then not go back." If that sounds like a mission statement, you've only got part of it. It was more than just wishful thinking, more...

3-0 Drafters of Day One by Marc Calderaro

The first three rounds of Limited at the World Championship are in the books! And with some spicy games in the books—Owen Turtenwald's mid-combat The Mirari Conjecture was pretty crazy, as was...

Road to the World Championship: Wyatt Darby by Corbin Hosler

Wyatt Darby has it all. The Iowa native won Pro Tour Dominaria. He is competing this weekend at the World Championship in Las Vegas. He signs autographs at tournaments. He's become a Magic legend...

The 2018 World Championship is a culminating finale of the Magic year—players battling in formats that have been shifting through the seasons like sand. As Guilds of Ravnica rolls in with the...

Announcing the 2018 Class of the Pro Tour Hall of Fame

This year's class of the Magic: The Gathering Pro Tour Hall of Fame has been determined and two players will be suiting up for the induction ceremony taking place during the weekend of Pro Tour...