For more than a decade now, Japanese Magic has been at the forefront of tournament innovation and skill on the world stage. Whether it was Akira Asahara's Enduring Ideal, or Shota Yasooka's Eternal Command from the Players Championship, or Kentaro Yamamoto inventing Mono-Black Devotion months before it became a thing, every generation of Japanese Magic players twists and evolves the format, keeping opponents worldwide on their toes. Lately, the hot-stepper has been Ken Yukuhiro (aka @death_snow). He was next-leveling Abzan in Modern years ago; his Hollow One performance at Pro Tour Rivals of Ixalan was magnificent; and oh yeah, did you see his Five-Color Dragon Draft deck from Japanese Nationals!?

Yukuhiro's ever-growing list of accolades comes on the back of his fearlessness for trying new things. Here at the World Championship—in a Standard format on the cusp of a huge change—Yukuhiro brought Blue Tempest Djinn, a deck few others even considered. Though you could hear the competitors between rounds talking about how they had lost to the deck in testing, despite thinking it was a good matchup, most all the players here fell back on safe, consistent strategies like Black-red Aggro. But not Death Snow. He cruised to a Top 4 finish at Japanese Nationals with his Blue Tempest Djinn deck, a card players have been trying to make work throughout its tenure in the format, and like hell he was going to change a Djinn mid-wish.

"Well, I decided to play the deck about 5 hours before Nationals, so there were definitely ways to make it better," Yukuhiro told me. "The Unsummon really didn't do anything, and Chart a Course was only good if I was playing first, otherwise I didn't have time to cast it." So he just replaced them with the consistency machine, Opt. After adding Walking Ballista to the sideboard—almost exclusively for Glint-Sleeve Siphoner—he ran the deck back here.

Iterations of this deck were bandying around for a while, for sure, but seeing it at the most elite tournament Magic has—especially when the format is widely considered "solved" or at least solidified—makes faces light up. And that was before he went 3-1 on the first day Djinn-ing people's faces off. He was even streaming the deck constantly before the tournament. What is this man thinking?

"I tried a lot of other decks, but none of them were good against Red-black Aggro ... I mean, this deck is still not good against it, but it has good match-ups against everything else." He continued, "Because the other decks are either midrange or control, I can get aggressive against them, and as long as Red-black's hand is only so-so, I can face up well against them too."

Yukuhiro, had gone looking for potential in areas of Magic Online and found it—seeing the Djinn iterations floating around. "It was good," he said. "But since pros weren't playing it, no one was taking it seriously."

When I asked why he thinks that pros don't often search those crevices for value, Yukuhiro said, "Because it's not efficient. If you can see coverage and Magic Online, you can see which decks are good or doing well, and so it's not worth the time for them to build and explore other areas."

"But me, I actually enjoy building decks, so that why I do it," he smiled.

"I never bring any deck I don't have fun playing. [With this deck] I have to think about whether to counter, or draw cards all the time, and I can also go all-out aggressive. It's everything I want to do in Magic!" Not content with just having fun here, Yukuhiro also had an eye to the future. Even though this format is all but over, Yukuhiro believes that Blue Tempest Djinn could still be a playing in the incoming Standard with Guilds of Ravnica. When I asked him about whether the deck would survive rotation, his tone become really inquisitive, and he was clearly re-brewing the deck right in front of me. After a minute or so he said, "You only really lose the Slither Blade and Baral, and Slither Blade is easily replaceable with Mist-Cloaked Herald ... With all the multicolor in Guilds of Ravnica, it's likely there will be a lot of big control decks. So a monocolored aggro deck like this might survive."

He was so pumped just thinking about it, this was the first time in the interview he started speaking in English. He blurted out "I like ..." then tripped over his words a bit, laughed at himself, then turned to his translator and went back to Japanese.

And with incoming Guilds of Ravnica, the card he's most excited to brew with is Charnel Troll. 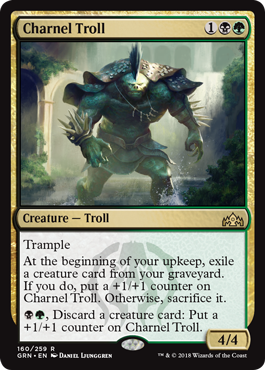 "Sorry about that," he said. "I really like low-mana/high-power creatures already so a three-mana 4/4 sounds great. But it's more than that. It has other bonuses, and downsides too. You actually have to think about it, and that means it's a lot more fun."

Ken Yukuhiro's style embodies one of the best aspects of Magic, the fun one, while still competing at the highest levels. About being on the Hall of Fame ballot, he mused, "It would be a great honor to be inducted, but I won't change who I am to be in. I'm always going to play the way I enjoy playing; and if people think I deserve to be in the Hall of Fame for that, that's great. If not, that's okay too."