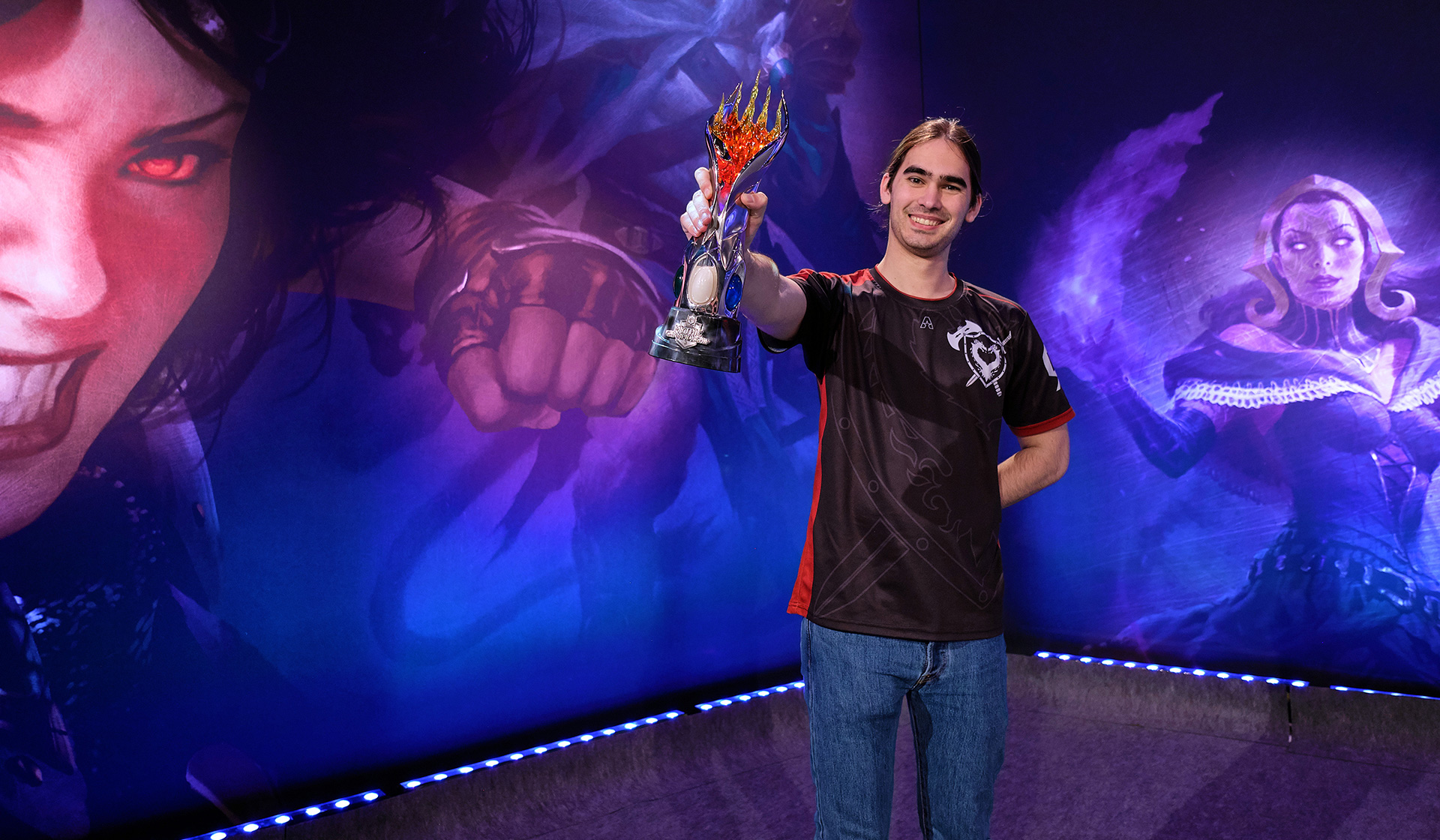 Eli Loveman battled through a murderer's row of Modern players to take down the Top 8 at the second Mythic Championship of 2019.

The hashtag for Mythic Championship II is #MythicChampionshipII. Join the conversation.

See Mythic Championship II as it unravels on the Magic: The Gathering Facebook page!

The second Mythic Championship of 2019 was both a victory for Modern Humans and the everyday human Eli Loveman, now London's Mythic Champion. From fighting through a field of 514 players to rising through a Top 8 of Modern's monstrous decks, Loveman put his powerful team to work to claim the Sunday trophy.

It took winning in the last round of Saturday—the last possible round—to clinch his Top 8 berth and join two other Humans decks to do so. The dominance of cards like Meddling Mage, made all the better with the open decklists of the tournament, put Loveman on his breakneck pace to the top of the $500,000 prize pool.

It wasn't an easy road to get there. Sunday's Top 8 showdown included venerable MPL players like Brian Braun-Duin, who fell in his quarterfinal match, as well as both Javier Dominguez and Alexander Hayne who Loveman had defeated as both his quarterfinal and semifinal opponents respectively. The finals faceoff against Matthew Sperling—in his third Mythic Championship Top 8—showed even the explosive power of Affinity wasn't enough to overcome the synergy in Humans decks.

With both War of the Spark and Modern Horizons entering the format next, Modern's evolution and Magic excitement will return in Mythic Championship IV in Barcelona, Spain. For now, Eli Loveman gets to hoist his well-deserved trophy and celebrate with friends after becoming champion of the 2019 Mythic Championship II. Congratulations!

More than 500 players were on hand to participate in Mythic Championship II in London along the Thames river, and after two drafts and 10 more grueling rounds of Modern we came to Sunday with a...

As the finals kicked off at Mythic Invitational II in London, the two players who sat opposite each other couldn't have entered under much different circumstances. On one side sat veteran Matt...

From 514 players and 16 rounds of action, the Top 8 for the Mythic Championship II in London was decided. Congratulations to Thien Nguyen, Eli Loveman, Alexander Hayne, Brian Braun-Duin, Adrian...

After sixteen rounds, eight players remain in the running for the glory, fortune, and prestige of winning Mythic Championship II! Learn more about them below. Name: Alexander Hayne Age:...

The Mythic Championship rewards performance in both Limited and Modern, but it's always interesting to see what had the best performance during the Modern rounds...

Across 10 rounds of Modern gameplay, no player notched a perfect 30 point record. But 26 players earned 24 or better points, and these are their decklists. ...

From across 10 rounds of Modern, a whopping 47 players earned 21 or 22 match points! Here's an incredibly array of successful Modern decklists from the Mythic Championship II in London. ...

How even and open is Modern? 70 different players earned 18 or 19 match points across the Modern rounds, leaving behind an incredible selection of decklists to share. ...

From 514 players and 16 rounds of battles, the Top 8 emerged in London. Congratulations toThien Nguyen, Eli Loveman, Alexander Hayne, Brian Braun-Duin, Adrian Zhu, Chris Kvartek, Javier Dominguez, and Matthew Sperling on earning their way to a Mythic Championship Top 8! The Sunday spotlight begins at 9 AM BST to determine who takes home the lion's share of $500,000 in prizes. Watch the action unfold live at twitch.tv/magic.

The second Mythic Championship of the season began with more than 500 players battling along the Thames River in London, and after two days of fierce competition that was Prerelease-meets-Mythic...

Between 515 competitors, over 38,000 Modern cards were registered for this event. Here is the breakdown of the most popular cards (other than basic lands) in the format. Let's start at the...

The Amazing Modern Decks in London by Corbin Hosler

Modern is one of Magic's most popular formats, and for good reason. With so many legal cards and new additions shaking up the format regularly (hello, Arclight Phoenix), Modern offers a world in...

During a deck check in Round 15 at Mythic Championship II, the judge staff noticed an issue with Yuuya Watanabe's deck where the sleeves of his Urza's Power Plants were marked in a specific way....

War of the Spark is a draft format unlike any we've ever seen before. The much higher prevalence of planeswalkers has thrown a huge curveball at the Mythic Championship field here in London, and...

A crowd of 515 players entered the tournament on Friday, but only 320 of them (62%) stayed enrolled after reaching a 4-4 or better record—the requirement to qualify for the second day....

From 515 players and 8 rounds, just two players notched records without a loss: Hall of Fame member Olivier Ruel and three-time Grand Prix Top 8 contender Fernando David Gonzalez each earned the right to stand at the top of standings.

Tune in Saturday to twitch.tv/magic at 9 AMBST to follow along as the battle for $500,000 in prizes continues!

At the ExCeL London by the River Thames, 515 players convened for the start of Mythic Championship II. With $500,000 in prizes on the line, a brand new draft format to kick off the day, and the...

It's been a little over a year since Pro Tour Rivals of Ixalan, where Luis Salvatto's Lantern of Insight lit the way to victory, and the Modern metagame has gone through a handful of evolutions...

Three days, $500,000 in prize money, and a whole lot of Modern and War of the Spark Booster Draft are what you'll get from Mythic Championship II, part of MagicFest+ London!

Mythic Championship II Survival Guide by Wizards of the Coast

Me: So, I thought I'd do something a little different for the preview. Editor: Sure, that sounds good....