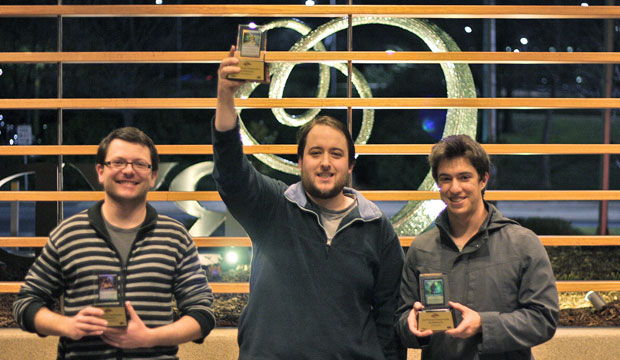 The Australian National Championship 2010 has come to a triumphant finish! The largest Australian Nationals ever, 134 players battled over the weekend, narrowing down to an exemplary Top 8. There were some familiar faces in the finals: Jeremy Neeman, hot off a Top 8 at Pro Tour: San Juan, last year’s Finalist Ian Wood, and previous Champion Steven Aplin. Rounding off the Top 8 were Ben Fleming, Edwin Jones, Alex McCormick, Adam Witton and Geoff Zhao.

When it came to the matches, there was clearly one dominant force. Adam Witton’s Red/Green Ramp deck was explosively powerful, combining the best accelerants Standard has to offer with the fiery power of Valakut, the Molten Pinnacle. He swept the final match in three straight games, at one point dealing 18 points of damage in a single turn thanks to the land-fetching power of Primeval Titan. The new Standard scene has been well and truly set, with long-time mainstay Jund all but dropping from the metagame and new decks rising to prominence. M11 cards have surfaced in nearly every deck, with Fauna Shaman, Destructive Force and various Titans showing up in winning decklists.

Joining the new National Champion at Worlds this year in Chiba, Japan will be Jeremy Neeman and Ian Wood, with Edwin Jones as alternate.

4 Knight of the Reliquary 3 Ajani Vengeant

4 Knight of the Reliquary 4 Oblivion Ring

2 Back to Nature 2 Acidic Slime 1 Elixir of Immortality