Welcome to coverage of the National Championship held this holiday weekend in Australia. The tournament is taking place at the Rydges Hotel & Resort in the capital city of Canberra. Canberra is the indigenous word for "meeting place". Canberra was elected as the location for the nation's capital as a compromise between Sydney and Melbourne.

Approximately 100 players from all over Australia have made the trip to participate in Australian Nationals. Along with the National tournament which begins on Sunday, there will be 4 Australian Open tournaments ("meatgrinders") run on Saturday.

The players will compete for a trip to Belgium and the honor of representing Australia at this year's Magic: The Gathering World Championships in Brussels. 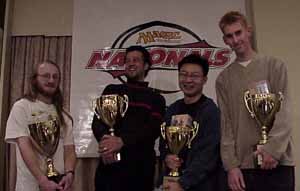