Being National Champ was so nice that Jay Elarar decided to do it twice. The longtime Canadian pro was the 2009 National Champion, and after a gruelling weekend in Montreal he's picked up a second title. He fought through a field of 111 players from across Canada, needing to win his last round in the Swiss for a berth in the Top 8. His weapon of choice in Standard Constructed? Blue-White Control.

Joining him at Worlds in Japan is finalist Vincent Thibeault, who led the pack at a perfect 7-0 at the end of Day 2. Thibeault was piloting the darling of M11 Standard, Titan/Valakut. Elarar got up to a quick two-game lead in the final match, thanks in part to two unlucky Summoning Traps from Thibeault. Elarar faltered in the third due to mana trouble, and it looked like he would suffer the same fate in the fourth. Starved for a second blue mana, Elarar was on the back foot constantly, but a shortness of threats from Thibeault allowed him back into the game, where his card draw from Little Jace and Big Jace took over.

Rounding out the team is Pascal Maynard, who edged out Kyle Duncan in a tight five-game playoff. It came down to the fifth game, Maynard's Red-Green-Blue Destructive Force deck on the play against Duncan's Monument Jund. Life gain from Obstinate Baloth and Pelakka Wurm forced the two into a standoff, and Maynard's deck was kinder: Garruk Wildspeaker, setting up a lethal Overrun.

by Josh Bennett
Flanked by a sea of spectators, the two got down to business.

Thibeault had to mulligan to start, and his draw was unexciting. Elarar played a pair of Walls of Omens, and had Essence Scatter for Thibeault's first play of Siege-Gang Commander off all red mana. Thibeault sprung the Summoning Trap and looked at his top seven, then he frowned. He put Overgrown Battlement into play.

Elarar removed it with Oblivion Ring, not wanting to give Thibeault access to green mana. Thibeault played a second Siege Gang. Elarar played Path to Exile on one of his Walls, then untapped and cleared the board with Day of Judgment. Thibeault could do nothing but play a second Valakut, still two mountains away from triggering them.

Elarar dropped Baneslayer Angel. Thibeault played mountain number five. Elarar swung and played a second Angel, hoping it would survive. Thibeault drew... and passed. Elspeth made it thirteen in the air and left Thibeault at two. The top of his deck was no miracle.

The two paired off lands, and on Thibeault's fourth turn he tried Oracle of Mul Daya. Elarar frowned and played the Mana Leak, hoping there was no Trap waiting for him.

Of course there was, but fate continued to be unkind to Thibeault, this time giving him no creature whatsoever. Elarar built up cards with Little Jace, conspicuously keeping counter mana open. Thibeault eventually tried a Primeval Titan but of course Elarar had Essence Scatter. There was no second Summoning Trap.

Elarar cashed out Jace Beleren and upgraded to Jace, the Mind Sculptor, rigging the top of Thibeault's deck. Thibeault drew and passed, and then when Elarar went to rig it again, he simply conceded rather than give away information when the win was out of his hands.

Elarar mulliganed, then thought hard about his one land, Spreading Seas hand. With a shrug, he kept. He stalled on just Scalding Tarn while Thibeault played Khalni Heart Expedtion and Rampant Growth. Elarar hit a second land and caught Oracle of Mul Daya with Flashfreeze. He drew a second Spreading Seas, but after playing it still had no third land.

Another turn passed and Elarar found nothing. Thibeault, on the other hand, found Siege-Gang Commander. Rather than draw out the inevitable, Elarar conceded. 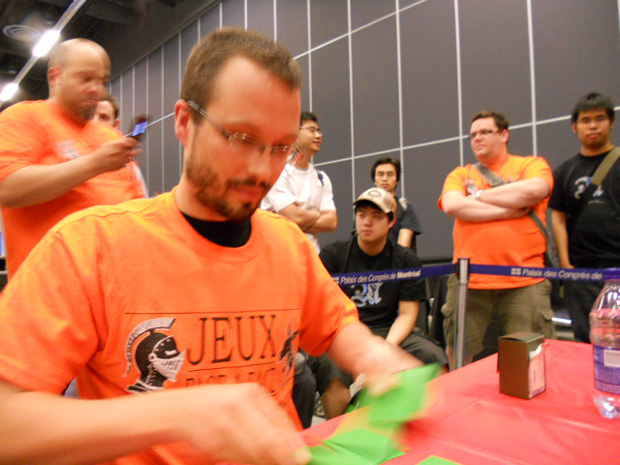 Elarar played Spreading Seas on Thibeault's opening forest, and then Mana Leak to stop Khalni Heart Expedition. He found himself stuck on Celestial Colonnade, plains, and Arid Mesa and allowed a Cultivate. Mana Leak stopped a second one.

A turn later he found Scalding Tarn and held off cracking it. Thibeault had no play on his abundant mana, and after drawing Glacial Fortress, used both his fetchlands and played Jace Beleren with counter mana up. Little Jace got him all the mana he needed while mana seemed to be all Thibeault could find.

After drawing three, Elarar moved up to Big Jace and Brainstormed. Thibeault tried Summoning Trap at the end of his turn and was Negated. "OK," said Elarar, now tapped out, "go nuts."

Elarar sat straight up in his seat to untap. Down came Baneslayer Angel with two mana open. Thibeault played Oracle of Mul Daya, and rather than counter it, Elarar simply used Tectonic Edge on Thibeault's Valakut. Siege-Gang Commander clogged the top of Thibeault's deck.

Elarar hit for five. Thibeault tried his Commander but Elarar had Essence Scatter ready. A second Baneslayer made it a one-turn clock. Thibeault drew, and extended his hand in concession as the crowd applauded.