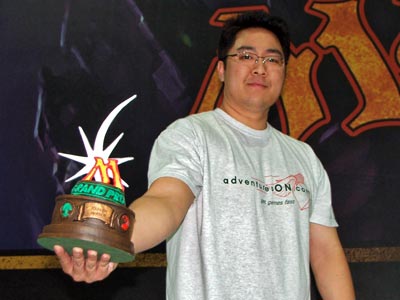 The two long days of Grand Prix Krakow are over, and the trophy will cross the Atlantic! For the first time since Bob Maher in Copenhagen 2002, a North American player has taken a European GP trophy. Paul Cheon had made the trip to Krakow with his friend, teammate and playtesting partner Luis Scott-Vargas. Both needed nine points to reach level 6, and Paul Cheon has taken a gigantic leap, cashing in on 8 points here in Krakow. Cheon bested Amiel Tenenbaum from France in the finals, who had been playing on single elimination mode for nine rounds. Amiel showed determination and skill, and his finals appearance was well earned.

The format, Standard with Lorwyn, brought a huge variety of decks to the public eye. Vesuvan Shapeshifter and Brine Elemental were among the major players, just as Shriekmaw and Tarmogoyf never ceased to be everywhere. Shriekmaw especially was in the minds of nearly everyone, with players going so far as to call the Lorwyn card "metagame warping" and "format defining". One thing that the format did define was the simple fact that in Lorwyn Standard, you can play whatever you like best, be it Suicide Black, Skred Red or even a deck that needs double green, double black and double red to work.

Just like Planeswalkers can travel the multiverse, players came from everywhere. From Japan, Australia and the US to Russia, Estiona and Serbia-Montenegro, almost every Magic playing country represented. We hope to see much more of that in the future, so keep your bookmarks at www.magicthegathering.com and check back for Grand Prix Kitakyuushuu next weekend, where a crack team of reporters will watch the Player of the Year race unfold and answer the question: What happened to Kenji Tsumura's mojo?