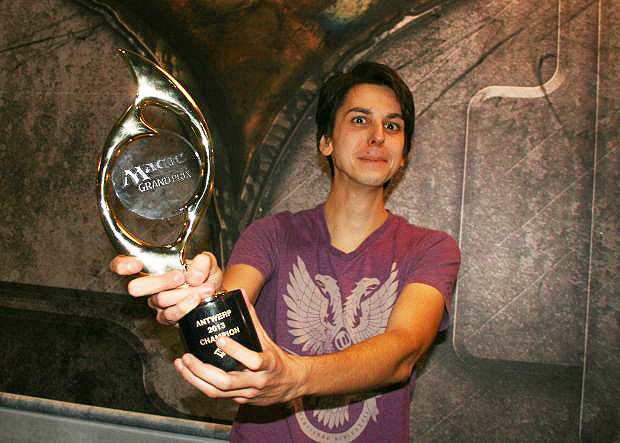 1,600 players followed the call to Antwerp, making the Belgian Grand Prix one of the largest Modern tournaments of all time. We saw a very diverse field. Some players ran new decks like Raphael Levy and his Merfolk build, while others brought a different and often improved version of an existing archetype, e.g. Martin Juza and Stanislav Cifka who showed up with a WR Splinter Twin deck.

While the pros set the bar very high, many players followed their lead, putting their trust into their own takes on the established archetypes. One member of this particular group was 23-year-old Patrick Dickmann, the twin brother of Fabian Dickmann who finished in second place at Grand Prix Bochum last year.

At first it didn't look like Patrick would be able to one-up his brother; without byes, he had to recover from a crucial two losses in the first four rounds of competition. Despite being on the bubble from round five on, Dickmann never dropped another match all weekend, climbing the ladder with his Splinter Twin deck that also sported a number of burn elements.

For a very long time, it seemed like Living End would be the defining deck of the weekend, securing two spots in a Top 8 that also featured Tron, Infect, Affinity and Jund. Fabrizio Anteri and his Tron deck eliminated one of the Living End players, while Dickmann defeated the other in the semis. The final, then, was over in a hurry, with Dickmann assembling his combos before Anteri found a way to unleash the full power of Karn Liberated, making Dickmann your Grand Prix Antwerp Champion!