Tsuyoshi made some alterations to his Block Constructed goblin deck after seeing a Goblin Bidding deck do well at the European Championships. He merged the two decks together and he brought it to the Grand Prix. Two friends—Fujita Osamu and Tsutomu Yamada—also brought card for card copies. All three players advanced to the Top 8.

There were five Japanese players in the Top 8 overall and Yoshi squared off in the finals with countryman Itaru Ishida and his Green-Red Beats. After three hard fought games he emerged the champion.

The home town crowd was mildly disappointed by the all-Japanese finals but was thrilled with local performances including Noppadol Srirattana with one of three Wake decks in the Top 8 and Peerapot Ekpoothorn with one of the others. Both players were amateurs and took home additional money. The remaining Wake deck was played by Masahiko Morita.

The big money winner on the weekend was Malaysian Vincent Gan and the lone Psychatog deck in the Top 8. Vincent won the $1,500 amateur prize in addition to his $1,000 fourth place finish.

Congratulations to all of the Top 8 competitors! 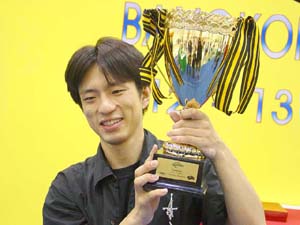