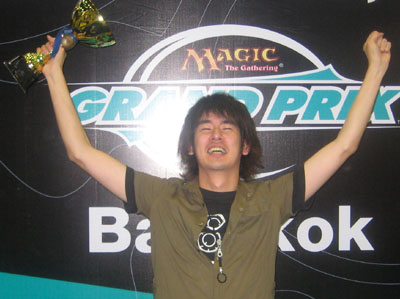 Masahiko came, he drafted and he conquered, earning himself his fourth Grand Prix title in the process. His blue/white Merfolk deck, sporting no less than three huge AEthersnipes, bounced Player of the Year Race hopeful turned contender Shingou Kurihara out of the finals in two quick games.

However, the Player of the Year race is far from over yet, with everyone now preparing their Standard decks for the showdown due to take place in Krakow, Poland next week. You want the news, the tech and the decks of the pros? Keep it locked here at Magicthegathering.com (now would be a good time to set it as your home page, I'm serious) and we'll be sure to keep you informed. I'll see you all in Kitakyuushuu, Japan in two weeks as we follow the build up to the World Championships in December!

Most of the people agree that Kenji Tsumura is the current best player in the world at the moment, but people usually don't agree with who is the best drafter, even if the most popular in that area is Richard Hoaen. In my opinion Japan's Takuya Osawa is one of the best 3 drafters in the world at the moment – maybe the best, having two Limited pro tour finals under his belt to prove his skill with 40 card decks. This top 8 draft features 5 Japanese players and 3 Singapore players, getting a lot of talent into the mix. If we want to learn how to draft this format, we'd better do it with the best at the table.

When Osawa saw Thundercloud Shaman in his first booster he realized that the Giants archtype was worth a try, and was rewarded with another one immediately after with Giant Harbinger. Hearthcage Giant, some Axegrinder Giants and a Hamletback Goliath followed. He also grabbed some Lowland Oafs and Soulbright Flamekin as they help his mana curve and the trample effect is great with Giants.

Stinkdrinker Daredevil is a really high pick in this archtype and Osawa was quite happy to take it on the first pick of the third booster. However, the hard decisions came when he had to pick a second color, as you can complete the Giants archtype with White or Green. Green provides Elvish Handservant, Fistful of Force and Leaf Gilder, while White provides some decent spot removal, Kithkin Greatheart and Kinsbaile Balloonist, which may not sound too hot… but have you ever seen a flying Giant? Osawa got better green cards and ended up just splashing white for Oblivion Ring, as he got two Shimmering Grotto.

His green cards were Epic Proportions, Fistful of Force, Leaf Gilder, Nath's Elite and Woodland Changeling. Again, don't underestimate the power of trample in the Giants deck, and the other cards help fill the gaps in the curve. As well as speeding things up in the case of Leaf Gilder, or just enabling an alpha strike.

Overall I think Osawa's deck is really good and he has a good chance of taking the trophy, but he was unhappy with his deck, so I might be wrong, or maybe he is just too much of a perfectionist when it comes to drafting. Let's see what happens!

After knocking Paulo Vitor Damo da Rosa out of Top 8 contention in the final round, Takuya Osawa drafted a red/green Giants deck that he wasn't overly pleased with. His opponent Shingou Kurihara is rapidly playing catch-up to Tomoharu Saito in the Player of the Year Race, and with a win here could definitely look at closing the gap between them.

Takuya lead with an Adder-Staff Boggart and an Inner-Flame Acolyte, getting in some early damage before Shingou was able to stabilize with a Glen Elendra Pranksters. Takuya cleared the board with a Thundercloud Shaman, only to have Shingou bounce back with a Shriekmaw. A Warren Pilferers on the Shriekmaw later, and Takuya was shuffling up for Game 2. 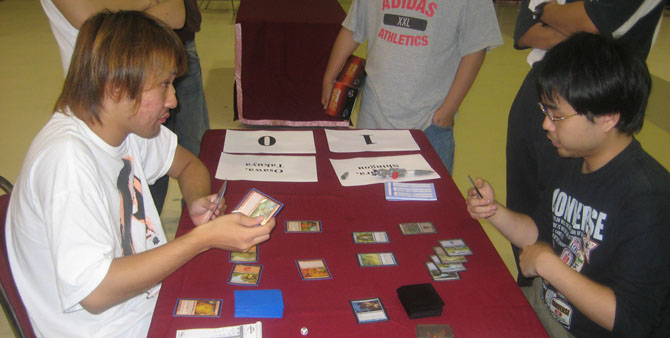 This time, he lead with a Soulbright Flamekin and the Inner-Flame Acolyte, while Shingou slowed him down with an upkeeped Pestermite on his only Forest, giving the Player of the Year Race hopeful time to get his Pranksters into play again. Takuya rallied back, adding Lowland Oaf to his attack force but not playing out a fifth land. Seeing his opponent shy on mana, Shingou tutored up a Thieving Sprite with a Faerie Harbinger, and started picking Takuya's hand apart with it. First one Thundercloud Shaman, then another, then an Epic Proportions. Takuya's chances were fading fast as Shingou's Glen Elendra Pranksters kept his Faeries out of harms way. It wasn't long before Shingou's pint-sized fliers had finished off Takuya.

In this Semifinals match, we get to see an Asian clash, featuring Shingo Kurihara from Japan and Yong Han Choo from Singapore – the former a contestant in the player of the year race.

Kurihara won the die roll and started playing creatures on his third turn, when his Pestermite tapped his opponent's land. Choo played two Goldmeadow Harriers on the first two turns and then a Harpoon Sniper, taking control of the table. He took a while to get his fourth land and Kurihara was able to play out some flyers. Choo tried to be tricky with his own Pestermite, but Spellstutter Sprite denied that, giving Kurihara a free attack as his opponent couldn't use his Sniper without mana open. There was some bounce from Kurihara's side and removal from Choo, in the end resulting in a win for the Japanese Pro Player.

Kurihara said that he wanted to draw, instead of playing, but guess what – it was not his choice, as he had won the first game. He quickly apologized to his opponent and, after checking his starting hand, he decided that it's better to take a mulligan. He missed his second land drop for several turns, while his opponent played some creatures on the third, forth and fifth turns. Kurihara drew no land, and conceded on his sixth turn. This time, Kurihara was allowed to choose and opted to be on the draw. Both players laid out creatures on their first few turns, Kurihara a Deeptread Merrow, the Singapore player a Streambed Aquitects. As they both had Islands, both of their creatures had evasion. Kurihara made things unfair with his Shriekmaw, killing his opponent's Aquitects. Choo played a Galepowder Mage that would be pretty unlikely to target the Shriekmaw, at least.

The match got interesting when the Singapore player attacked with his rare flyer and Shingo Kurihara tried to resolve a Faerie Harbinger, only to find a Broken Ambitions in the way. The Japanese player then decided to go beatdown and played an end of turn Spellstutter Sprite, attacking for 5 on the following turn to even the scores at 5 life apiece. Kurihara played Glen Elendra Pranksters and tried to get Shriekmaw back into his hand with Peppersmoke, but it got shocked by a Moonglove Extract. However, it was enough for Choo, who conceded on his next turn.

This win gets Kurihara very close to the top of the Player of the Year Race, and if he wins in the finals, he will be in second place, frighteningly close to the Race leader, Tomoharu Saito. 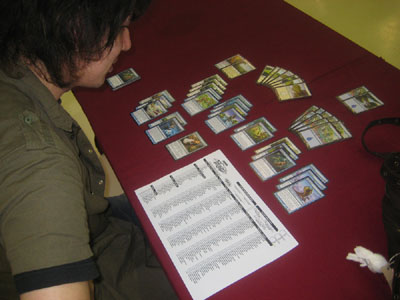 Mmmm bouncy, bouncy! With five Japanese players in the top 8, who are – let's face it – some of the best players in the world, it's certainly no surprise that two of them have battled through to the finals here in Grand Prix Bangkok. Masahiko Morita is no stranger to Grand Prix top 8s, this being no less than his 16th playoffs appearance. Shingou Kurihara may only have one other Grand Prix top 8 at this point, but he also has a Pro Tour top 8, something Masahiko has yet to achieve. Not only that, but he is now a very serious contender in the Player of the Year Race, now right behind leader Tomoharu Saito and overtaking Kenji Tsumura in second place.

We've seen Shingou's blue/black Faerie deck dismantle his opponents in the quarter and semifinals so far this evening, but as yet we know very little about what Masahiko is playing. Well, you know very little maybe, but I sneaked over for a peek while they were still building their decks, and found that Masahiko's opponents were in for a nasty triple AEthersnipe surprise.

Masahiko stumbled on his early land drops. Thankfully, his Judge of Currents got on the Springleaf Drum to beat him out a game plan, playing out a Drowner of Secrets and a Moonglove Extract to hold back Shingou's Stonybrook Angler and Hornet Harasser, who were doing their best beatdown impression with the help of a Runed Stalactite. This gave Masahiko the time he needed to find two more land, and with the help of the Drum, whip out a Cloudgoat Ranger. Shingou's deck offered nothing to stop it, and backed up by a member of the AEthersnipetrio, the Ranger quickly awarded game one to Masahiko. 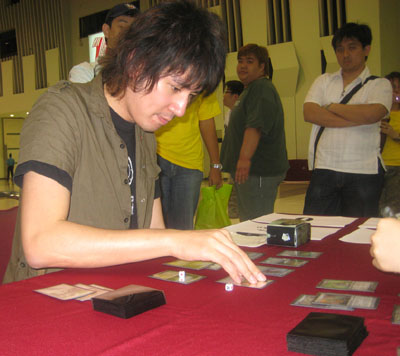 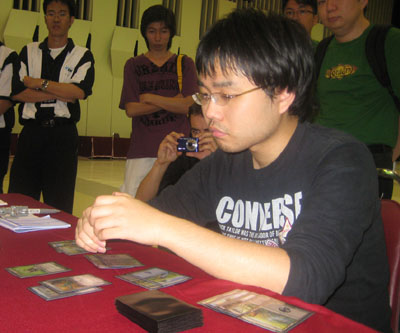 Shingou had the Nameless Inversion in Game 2 to take out Masahiko's third turn Merrow Reejerey. Masahiko again stuttered with his mana development, stalling on three land while Shingou played out his star player, the Glen Elendra Pranksters. A Whirlpool Whelm held back the Pranksters briefly while Shingou took a firm hold on the game with a Mulldrifter.

Suddenly, a fourth land off the top had Masahiko thundering back into the game with an Inkfathom Divers via his trusty Springleaf Drum, managing to find him a fifth land. This allowed him to play back to back AEthersnipes, completely reversing the board position and leaving Shingou wondering just how his small yet tricky Faeries were going to take down the pair of 4/4 monsters – not to mention the 3/3 islandwalker. Shingou tried to play and return a Pestermite with his Pranksters to hold off the incoming army, only to realize that Prankster's trigger needed a target long before the Pestermite actually came into play. Recognizing this as a considerable predicament, Shingou could only grin and offer his hand to Masahiko, giving Morita his fourth Grand Prix title. 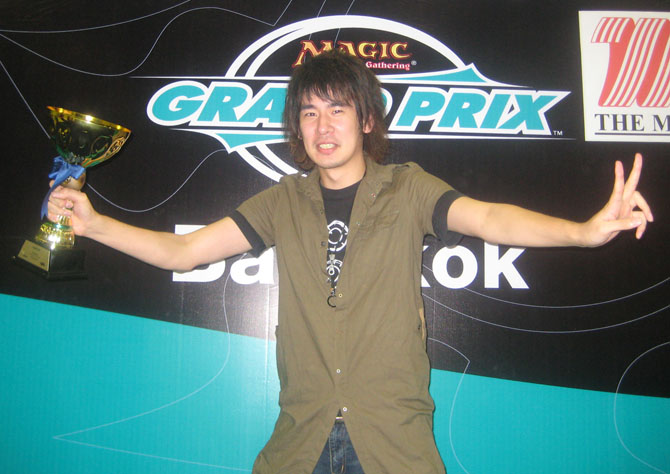