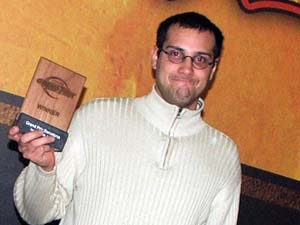 Who would have thought that Austria would be the most successful country in putting their players into the Top 8? With only eight players in the field, Austria put one into the Top 8 here at Grand Prix-Barcelona, and he took the title. It was Helmut Summersberger's second Grand Prix win, which he took in a two-game match from French pro Raphael Levy. Summersberger won on the strength of a blue-black Dimir deck with a red splash, a combination that he was able to draft every time on Sunday.

Starting with just over 1200 players on Saturday morning, Grand Prix-Barcelona featured nine rounds of Limited Magic before 128 players advanced to Sunday's competition for the money, the glory and the crown of this year's Spanish GP champion. Although the Spanish players came out in force, only one of them made the Top 8. He was the only player in the final eight who has not had a GP Top 8 appearance before.

Ravnica-Guildpact Limited seems to be a skill-intensive format as only six amateur players made it into the money ranks. The format offers so many chances to misbuild a deck that naturally those with more experience came out on top. We will see if that hold true once Dissension is released and the full color pie of Ravnica will hit Magic players like custard pies hit clowns. Check back for the big event on magicthegathering.com when we enter Pro Tour-Prague on May 5!

The Top 8 draft had to be restarted with an entirely new set of first boosters after pick number 7. Jelger Wiegersma had discovered that one of the Ravnica boosters contained a Crash Landing... which is a Guildpact Uncommon! That mistake corrupted the whole draft, and since it wasn't too far into the process, the draft was restarted. 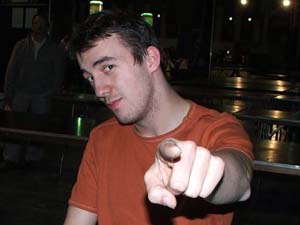 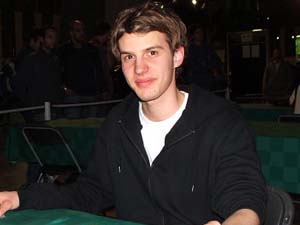 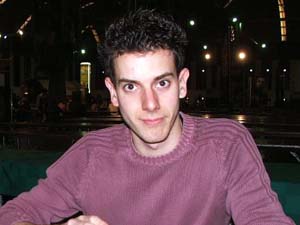 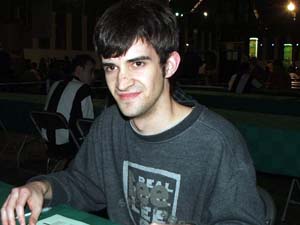 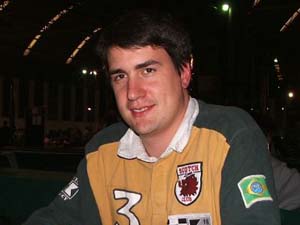 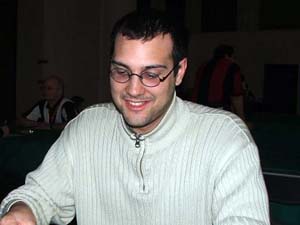 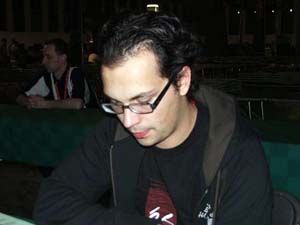 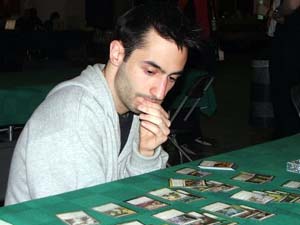 Name: Raphael Levy
Age: 24
Home: Göteborg, Sweden
Greatest Magic Achievement: "hard to say, there were so many" (We think GP Lyon Winner 97-98)
Quote to show how cool he is: -

1 Scatter the Seeds 1 Seeds of Strength 1 To Arms! 1 Wildsize 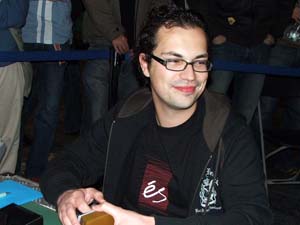 Olivier had drafted a classical Dimir-splash-red-deck, but is missing a few key cards. He had two Halcyon Glaze, but with only twelve creatures to activate them, it looked like they would miss a few attack steps.

Johan's deck was pretty mediocre as well. He firstpicked a Selesnya Guildmage and stayed on green the whole draft, but could never figure out whether black or white should be his second main color.
In the end, he played both.

Olivier got to play first, and had to mulligan twice, as he didn't get any lands. He finally kept a two-land hand - but both lands were bounce lands, which could mean a great or a horrible start for him. Johan took a mulligan as well to keep it a little fair, but Olivier never drew a basic land, and a lonely Shambling Shell won the game for Johan. After the game, Olivier discovered a possible reason for his difficulty to draw lands: The deck included no basic lands. After deck-construction, a judge took his deck, and Olivier got something to eat, and assumed lands would be given to him.

Head judge David Vogin ruled that the game would stand like it was played put, but that Olivier would receive no further penalty.

Olivier was quite upset, as he thought the judge was partly to blame for the mistake, and requested to replay the game, but Vogin upheld his ruling. 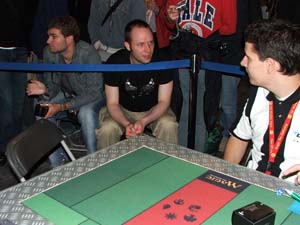 The ghost of Olivier Ruel

Meanwhile, Helmut Summersberger had won Game 1 in his match against Jean Charles Savin.

In Game 2, Olivier mulliganed again, this time because of too many lands. He kept the second hand, and a real game could start. Or could have started, if Olivier hadn't been short on mana. He got to play Surveilling Sprite and Halcyon Glaze, but they were no match to Johan's Dimir House Guard, Ghor-Clan Savage, and Siege-Wurm. Olivier shook Johan's hand, then left without a word.

In Game 2 of the Summersberger - Salvin match, Helmut was very close to winning when I arrived. He had Tattered Drake and Golgari Rotwurm against Orzhov Euthanist and Mourning Thrull, and didn't have any difficulty riding his big beasts to victory.

Johan Sadeghpour advanced to the semifinals and would meet Helmut Summersberger. 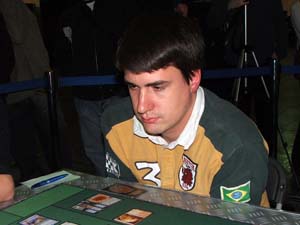 Here we are at the quarterfinals of GP Barcelona! In the match featuring the local matador Aniol Alcaraz, Aniol wins the die roll and chooses to play first. Both players keep their hands and Tin-Street Hooligan from Aniol marks the first play of the match, the winner of which will advance to the semifinals. Jelger answers with Surveilling Sprite, Ravnica's favorite softdrink. Aniol clearly has the better start, as a Terrarion and <a href="http://gatherer.wizards.com/Pages/Card/Details.aspx?name=Boros+Swiftblade" class="autocard-link" data-image-url="http://gatherer.wizards.com/Handlers/Image.ashx?type=card&name=