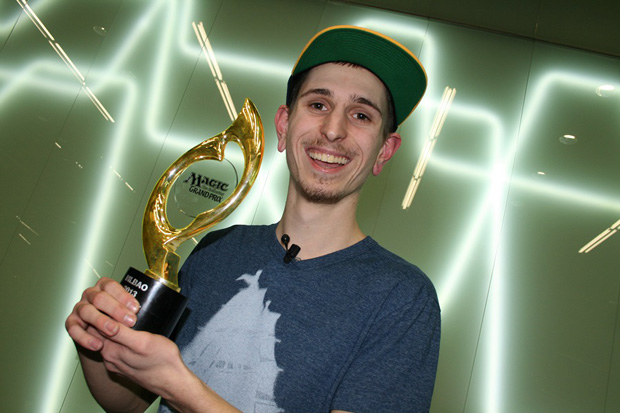 Congratulations to Mitchell Manders, the winner of Grand Prix Bilbao 2013!

Mitchell Manders from the Netherlands had previously taken a bit of a break from Magic. Before this weekend his biggest success had been a trip to New York for the Junior Super Series, many years ago. Now qualified for Pro Tour Dragon's Maze with his win in Bilbao, is flying high, having defeated Lukas Jaklovsky's Jund deck in a tight three game set with the red white and blue flash deck that he had first encountered on Magic Online.

Coming into the tournament, some felt that the Modern format is all about Jund, but here in Spain we've encountered far more than that. We've seen combo in Scapeshift and Storm. We've seen aggro in zoo and robots, and we've seen control in Gifts Ungiven and the UWR Flash deck that took Mitchell Manders all the way to the top. This is the last Modern event before Gatecrash becomes legal, and Modern appears strong and healthy, ready for the influx of new guild cards with the release of the new set.

As the sun sets on the tournament in Bilbao, we find ourselves looking forward to both the Gatecrash prerelease, and onward to our next event Grand Prix London, where we will be bringing you a first look at Gatecrash limited before Pro Tour Gatecrash in Montreal Canada.

Good night from all of us here in Spain, and congratulations again to Mitchell Manders, our Grand Prix Bilbao 2013 Champion!