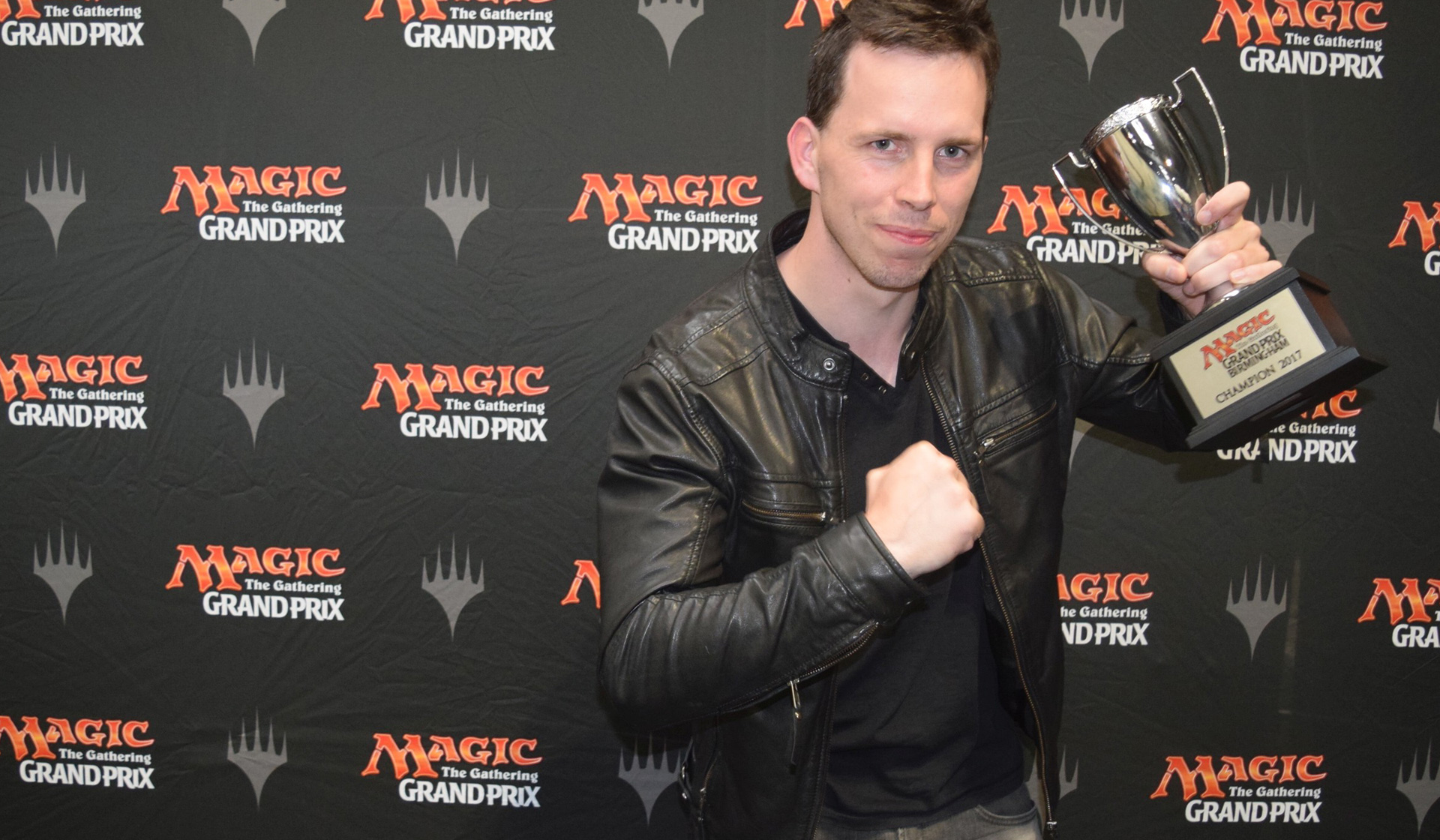 Loïc Le Briand took his Shrine of Burning Rage all the way in Modern, defeating Gold pro Steve Hatto in the finals to become champion of Grand Prix Birmingham 2017!

Modern once again showed itself from its best side at Grand Prix Birmingham. First, it proved as popular as ever with a whopping 1,743 players flocking to the north of England from near and far. Then it almost looked as if the format had developed a case of predictability, with four decks—Grixis Death's Shadow, Titan Shift, Eldrazi Tron, and Affinity—accounting for up to 40 percent of the metagame. But in the end, when 522 Day 2 players had been cut down to just eight, the much cherished diversity of Modern revealed itself once more: How ever one looked at it, seven or eight different archetypes made it to the playoffs!

In a Top 8 that was the third for Simon Nielsen, Oscar Christensen, Steve Hatto, and Loïc Le Briand, the latter prevailed, personally defeating Christensen and Hatto in the semifinals and finals, respectively. And he did so with his very own take on Burn, featuring the tech inclusion of Shrine of Burning Rage. Congratulations to Loïc Le Briand for running hot and becoming the champion of Grand Prix Birmingham 2017!

With 1,743 competitors in total, Grand Prix Birmingham was a big show and a number of big stories came out of the weekend too. There were some new trends with regards to decks, there were some...

After fifteen rounds of Modern, with a total of 1,735 others eliminated, only eight players remained in the running for the fame and the fortune, the title and the trophy. Check out the eight...

The Top 8 showcased eight different archetypes. The next 24 players in the standings couldn't quite keep up with such variety, but still added a number of interesting builds to the mix, including...

After fifteen rounds of Modern, with a total of 1,735 others eliminated, only eight players remained in the running for the fame and the fortune, the title and the trophy. Find out more about...

When the smoke and dust had settled and the sounds of battle had died down for the night, six players were left who escaped the first day's nine rounds with perfect records of 9-0 still intact:...

After nine rounds of Modern, the original field of 1,743 was whittled down to just 522 players. They would return on Sunday for another six rounds followed by the Top 8 playoffs.

Leading the charge into the second day were six players at 9-0: Ivan De Castro Sanchez, Hylco Worm, Jérôme Bastogne, George Channing, Chris Arlow and Oscar Christensen. But fierce competition wasn't far behind. Just among the people who finished the day with a record of 8-1 one could find some previous Grand Prix champions like Eliott Boussaud and Alexandre Darras as well as current Gold pros Simon Nielsen, Grzegorz Kowalski, and Ivan Floch.

So tune back in tomorrow to watch some of the game's best and brightest play for fame and fortune, for points and prizes, and eventually for the trophy and the title of champion of Grand Prix Birmingham 2017!

A whopping 1,743 players had traveled to Birmingham this weekend to test their mettle in Modern. And it was a new Modern too, the most modern Modern yet! For the recent release of Hour of...

The main event may have only started this Saturday morning, but the action already began on Friday. Naturally, we were most interested in the Last-Chance Trials run that day, as those results...