Quick Question: What Do You Think of the Preview Cards?

This weekend's Grand Prix events, besides Modern, featured exclusive Shadows over Innistrad experiences. Of course the experience wouldn't be quite complete without a few spicy preview cards. Like the following: 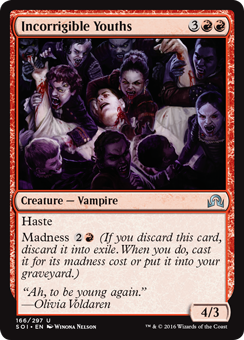 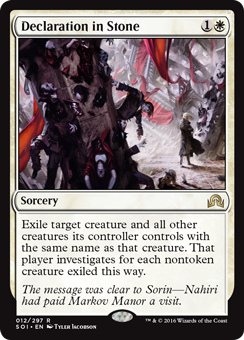 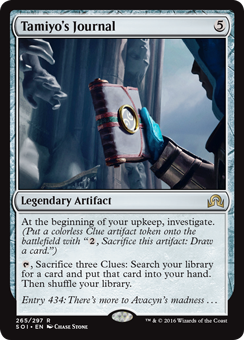 Or a transforming Vampire: 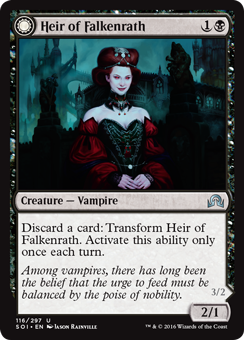 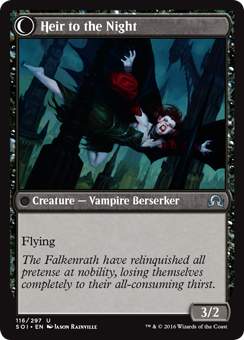 Or a furious Archangel: 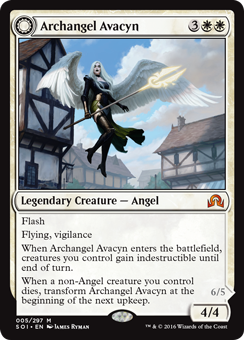 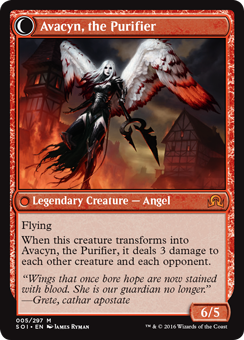 We asked some of the game's best and brightest for their thoughts on these cards. Here is what they had to say... Tamiyo's Journal seems a bit slow, and the removal spell leads to card disadvantage. But they might work if there are plenty of alternative ways to get Clues in the new Standard format. World Magic Cup champion Marco Cammilluzzi: I started playing when Blue-Green Madness was around. So Arrogant Wurm and Basking Rootwalla were the first creatures I played, and I have good feelings for these types of cards. Therefore, I like Heir of Falkonrath and Incorrigible Youths. It's a combo: on turn three, you discard and attack for 7 damage. I love this!

Avacyn will be great in Limited, and in Constructed she could fit in a control deck. Flash is the most important ability so you can keep mana open and decide whether to play countermagic or the Angel, depending on what the opponent does.

Declaration in Stone is good removal, I think. Compared to Path to Exile, it could be preferable in the early game. I'd rather give my opponent a Clue than an extra land. Later on in the game, Path to Exile is probably better because a free land is not as valuable and the lower mana cost and instant speed is preferable, but Declaration in Stone could still get multiple creatures. Pro Tour Oath of the Gatewatch semifinalist Patrick Dickmann: A better Reckless Wurm! At least I like haste quite a bit more than trample. Considering these madness cards and enablers, one maybe won't have the time in Shadows over Innistrad Limited to investigate that many Clues.

Two mana to kill anything is definitely interesting. Rating a removal spell in a vacuum is of course tricky. Giving an aggro deck reach in this way, a mana sink for later, may not be good idea. No. 12 Fabrizio Anteri: To be honest, I don't like these early previews. I have had my mind on Modern for, like, the last three months now, and I still have to catch up with Standard for Grand Prix Paris. And then look at all of the new cards in preparation for the Pro Tour ... Oh man.

But I like Archangel Avacyn. That card definitely has potential. Magic Online champion Magnus Lantto: Avacyn seems insane. In Limited, it's the best bomb in a long, long while. Even in Constructed, you're going to have a deck with this and Ayli, Eternal Pilgrim, maybe Eldrazi Displacer. There are all kinds of tricks with this.

It seems overpowered, but I still like the card because you can do so many cool things with it. No. 17 Joel Larsson: If you have this card in a real-life draft and everyone at the table knows about, you can always pass your turn with five mana up. I mean, you just can't call a bluff like that. At the very worst, it's a Fog with an instant Serra Angel.

The best Limited card since what? Living Death? No. 20 Martin Dang: Avacyn seems absolutely crazy in Limited, but for Constructed it really depends on whether there is a good sacrifice outlet to trigger her. I'm really excited about madness. Blue-Green Madness is one of my favorite decks of all time, and Incorrigible Youths is just Arrogant Wurm, right?

Declaration in Stone could be good as a sideboard card against tokens. It could also be good in an aggro deck where you don't care about opponents spending time to draw cards. Heir of Falkenrath seems very good. It's a pretty obvious combo with Incorrigible Youths, and the back side is the same as Delver of Secrets!

Tamiyo's Journal showcases investigate, which is an ability I expect will be good for Limited in particular. It will likely lead to longer games and a more interesting late game.