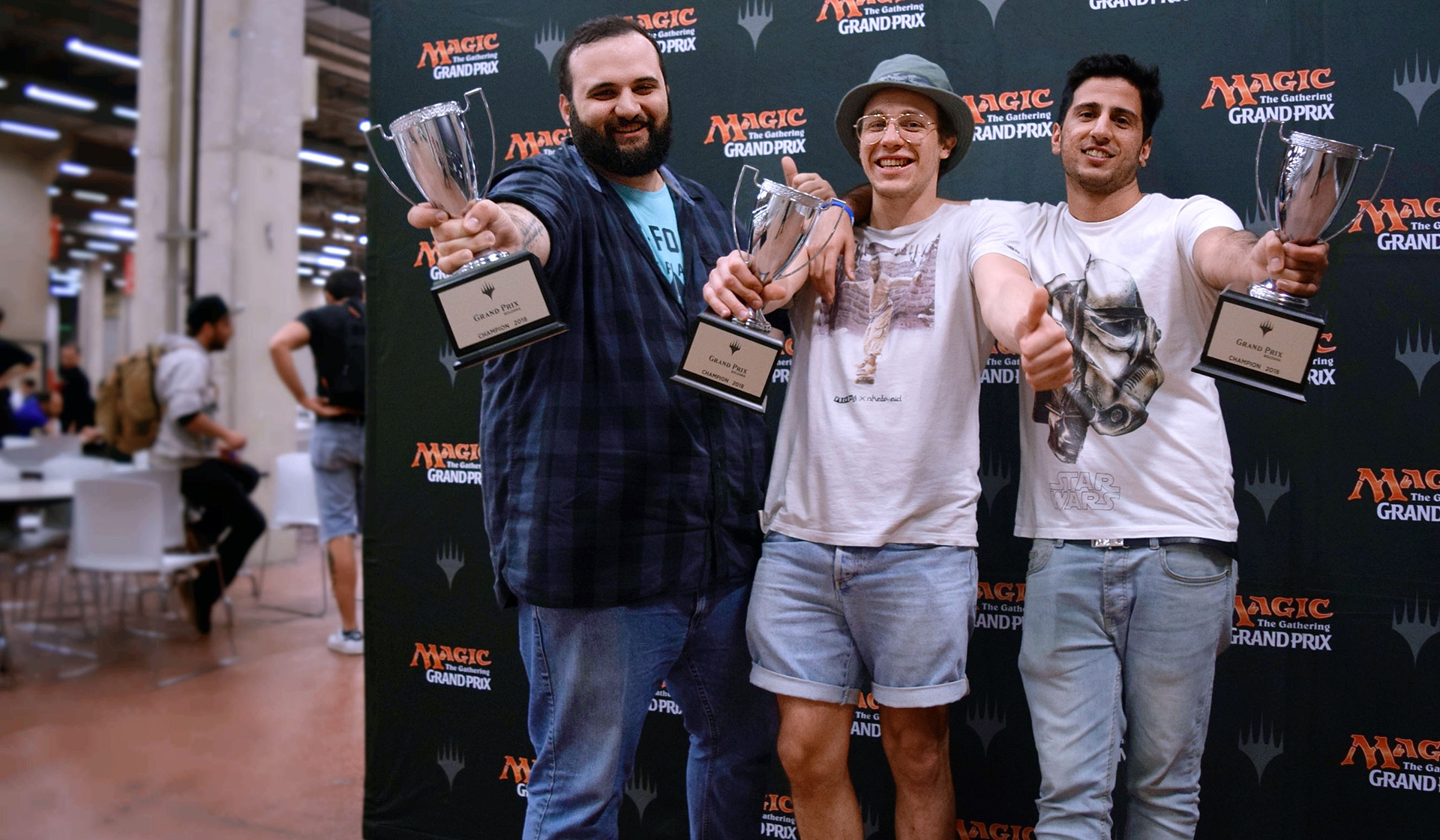 At the first premier event to feature Dominaria in Limited, the trio of Antonio Pinto, Davide Miani, and Usama Sajjad overcame all opposition to become champions of Grand Prix Bologna 2018!

THE HASHTAG FOR GRAND PRIX BOLOGNA IS #GPBOL. JOIN THE CONVERSATION.

To celebrate the release of Dominaria, a total of 480 teams had gathered to compete at Grand Prix Bologna. 61 of them qualified for the second day; four made it to the playoffs. In the end, only one trio could claim the title and hoist the trophies, of course.

Throughout the weekend, people had massive amounts of fun with Saprolings, Knights, Sagas, and cards both legendary and historic. A single Haphazard Bombardment killed 13 permanents in one game, thanks to three Blink of an Eye, and Lich's Mastery made an appearance in a semifinal Draft deck!

The Top 4 featured several notable players, including the winners of seven previous GPs. However, none of them could keep up with one Italian team who first bested Andrej Rutar, Robin Dolar, and Davor Detecnik in the semifinals, then defeated Matthew Foulkes, Fabrizio Anteri, and Peter Ward in the finals.

480 teams and a total of 1,440 players took the opportunity to play the first Grand Prix with Dominaria limited in Bologna. An incredible amount of games was played, over 1,800 decks were built...

After fourteen rounds of Swiss and one round of playoffs, with a total of 1,434 other players eliminated, only two teams remained in the running for the fame and the fortune, the title and the...

After fourteen rounds of Dominaria Team Sealed Deck play, with a total of 1,428 other players eliminated, only four teams of three remained in the running for the fame and the fortune, the title...

480 teams, or a total of 1,440 players, gathered in beautiful Bologna on this sunny spring weekend to celebrate the release of Dominaria, Magic's long-awaited return to the motherplane of the multiverse. And what better way to begin the exploration of a new set than Team Limited!

After the first day's eight rounds of Team Sealed, four teams stood above all others with records of 7-0-1: David Besso/Matteo Cirigliano/Giovanni Gesiot and Panagiotis Papadopoulos/Aleksa Telarov/Stjepan Sučić (pictured above, left to right in the back) as well as Sveinung Bjørnerud/Andreas Nordahl/Espen Nordahl and Enrico Russo/Francesco Giorgio/James Allingham (left to right in front).

They would have a head start over the competition on Sunday, but said competition included some fearsome opponents such as Grzegorz Kowalski/(12) Martin Jůza/Petr Sochůrek and Ondřej Strásky/Thomas Hendriks/Ivan Floch at 6-2.

With so many great players in the running and a new set to boot, it was going to be an exciting race to the top on Day 2. So tune back in then for six more rounds of Team Sealed, for the Top 4 Team Booster Draft playoffs, and for the epic conclusion of Grand Prix Bologna 2018!

Day One Highlights of Grand Prix Bologna by Olle Rade

Exploring Dominaria For the First Time If you played the pre-release last weekend and managed to get a few drafts in on Magic Online, chances are that you have as much experience with Dominaria...