It's taken more than five years, but Brian Kibler has finally won a second Grand Prix title. The only player to commit to playing plains, he was rewarded with a deck that can only be described as "The Sickest Ever". In the quarters he took revenge on teammate Ben Rubin, who had beaten him twice in the swiss. That meant he faced Canada's Mark Zajdner, who'd just eliminated Zvi Mowshowitz. In an ironic twist, he'd done it on the backs of Quicksilver Dragon and Kilnmouth Dragon. Dragonmaster Kibler was not so easily beaten, and he advanced to the finals.

There he met amateur Matthew Cory. Incredibly, this was Cory's first sanctioned limited tournament. To be fair, he'd done a lot of unsanctioned drafting, but the accomplishment was not to be denied. In the quarter's he swept fellow amateur Josh Wagener, then did the same to Aaron Breider. However, he'd met his match in Kibler's monstrous deck. Insisting on winning with style, he took the match in two straight games, serving with Akroma, Angel of Wrath. Congratulations to Brian Kibler, Grand Prix - Boston Champion! 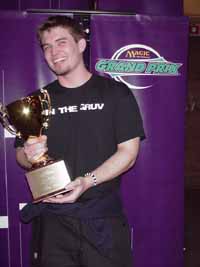