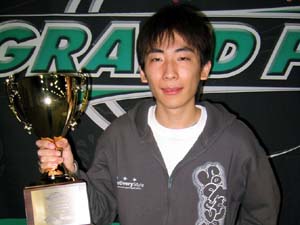 Just as Rodney Harrison plucked a first-quarter pass to stop a Philadelphia touchdown, Masashi Oiso pulled an amazing win out of what looked like a imminent defeat. With Lucas Glavin's deck promising a huge Sutured Ghoul, the theatrical Japanese walked the huge American into a trap.

It was a dramatic end to a Extended Grand Prix that did little to help solve the riddle of the Qualifying season. It's doubtful anyone left this room with any decent idea of what to play, and what to expect from events this season. There are a lot of cool new decks -- check Glavin's, Dempsey's or McLaughlin's just in the Top 8 -- but no clear "deck to beat."

The Grand Prix was clearly marked by that and the Japanese Road Trip. Are the big names in Asia about to flex their muscle all over the world? Or did they just come to see the Super Bowl? Congratulations to Masashi Oiso for his brilliant win and please don't be too harsh on Lucas Glavin. Playing in a premier event Top 8 is never easy. Just ask Brian "No Blocks" Davis. 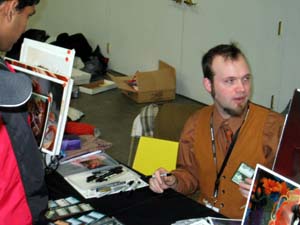 Scott M. Fischer has created some of Magic's most stunning.

The artist on site today is a veteran of premier event signing. I clearly remember him doing his trademark "fish" signature in Europe more than once. He has a few cards in the Kamigawa block (Time Stop and Meloku the Clouded Mirror) so players should have some news one to sign.

Here's a quick list of some of Fischer's cards you might have come accross in Constructed matches. 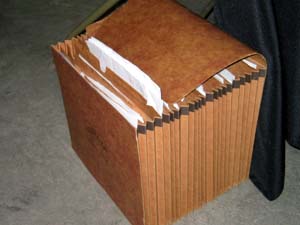 That's a lot of decklists.

While most players are out there slugging it out on the third round, sixty lucky players are kicking it back at the hotel or in the side events area. Their three free wins will sure come in handy on a nine-round day like today. So I took a deep breath and went through the huge decklist folder looking for their decklists.

Here's the the archetype breakdown for those players, apart from three lists that I couldn't seem to find. I clumped together some decks that might be a bit different (let's say Goblins with Black and straight-Red Goblins or Scepter-Chant and Scepter-Chant with Black).

More on that Welder-Reanimator deck later. 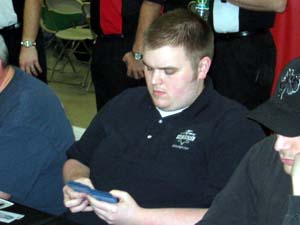 Gabe Walls and his creation.

Probably the most unusual decklist I saw so far certainly belongs to Gabe Walls. The veteran Pro Tour player took a page from a Columbus PTQ and brought mix of Welder.dec and... Reanimator.dec. First he uses Careful Study and Intuition to get the a huge monster into his graveyard and then Reanimate, Goblin Welder or Exhume bring in them to the playing area.

This plan allows him to bring in Sundering TitanPlatinum Angel or Bosh, Iron Golem. With the Welder he can keep things going... and if he starts recurring Mindslaver... you probably just want to scoop and save yourself any further beatings.

Four players survived the first day with no losses. One of them - Osyp Lebedowicz - swept the nine rounds. He leads the field with 27 points. Here are the four undefeated decklists:

4 Disciple of the Vault 4 Smother

Here they are, the few, the proud, the clearly insane. The "zebras" who held the tournament together during this first day, led by the Head Judge Bruno Barracosa. The scorekeeper is Reid Schmadeka, still alive after a full day of entering results. 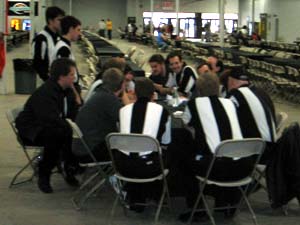 Here's the metagame for the second day:

While I was going through the Top 64 decklists to give you a metagame breakdown I came across several decks I found interesting. Maybe you already know them, but to me they seem like three curious metagame decks.

4 Sword of Fire and Ice