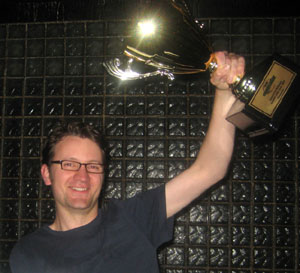 A frequent finalist, Anatoli Lightfoot has finally broken his curse and won an Australian Grand Prix. Sweeping the rest of the Top 8 aside with his very aggressive Elves and Giants draft deck, he didn't even drop a game in the playoffs, battering his opponents repeatedly with Incremental Growth and Elvish Handservant. Anatoli told us before this weekend that he hoped to gain approximately 20 ratings points here to qualify him for the World Championships in New York, because he'd be over in that neck of the woods anyway. I think we can safely say he won't have a problem there. Looking at the Top 8, I decided to stand behind André Coimbra again, figuring that he would at least know what he's doing. Not that the rest of the players in the Top 8 have no idea, they've all wrestled their way through to the playoffs too.

André was lucky enough to open a Final Revels, which put him almost squarely in the favored-by-the-pros Faerie archetype. A second pick Pestermite helped confirm that his neighbor was probably not following the same route, but he wavered for a moment for a Hoofprints of the Stag, but another Pestermite in the fourth pack would have given him that warm, comforting feeling in the pit of his stomach. He was one to a good feed. The sixth pick Dreamspoiler Witches nearly knocked him out of his chair.

Pack two was almost as good as pack one. Pretty close actually. In fact, you could almost go as far as to say better, on the grounds that a second Final Revels adds to the greatness of the first, and still brings its killing critters or players goodness as well, or something. He grabbed a Boggart Mob next, which ultimately ended up in his sideboard as he couldn't find enough Goblin or Changeling guys to fill his deck.

In pack three, the first two picks were barely worth noting, and André was forced to hatedraft a Cloudthresher first and a Thundercloud Shaman second. Thankfully, he found a Silvergill Douser third and an Æthersnipe fourth to salvage those somewhat inauspicious offerings.

His deck ended up a story of pairs, featuring pairs of Æthersnipes, Ethereal Whiskergills, Final Revels (of course), Stonybrook Anglers and Aquitect's Wills. The Wills being there to enable the Whiskergills, because we was a little short on other attackers.

I asked André if he fancied his chances? He could only shrug and say that his deck was "not bad."

Not wanting to waste any time, or spare our poor reporter any breathing room, the players launched into their matches quickly and efficiently. They're off my Christmas card list that's for sure.

First finished was Shawn Rayson, who beat down on Norman Macpherson with a pair of Cenn's Heirs and some Kithkin brethren in Game 1, and then three Heirs and a Changeling Titan in the second. Hot on their heels was André Coimbra, whose double Pestermite draw held Chris Ninnes at bay long enough that he didn't have a chance to get into the first game. Game 2 saw Chris getting in the early beats with his Faeries, but André's Ethereal Whiskergill soon came online and took it home to also finish their match 2-0.

Anatoli Lightfoot came through next. He was concerned his Elves and Giants wouldn't work especially well together, but they were certainly larger than Andrew Eckermann's 2/2's, who were all swept aside by an Incendiary Command. Game 2, Anatoli's Elvish Handservent got the ball rolling, and a turn five Incremental Growth blew Andrew out of the water. All he could do was grin and offer his hand.

Finally, Hassan Kamel bested David Zhao in three, succumbing in the first to David's Cloudgoat Ranger in the first game but breaking through at the last minute in Game 2 with a Profane Command for five. The last game looked like it might become a stalemate, but David's draws seemed lackluster, and Hassan managed to finally overpower him for the win.

In following with the blistering fast quarterfinals, the semis were promising to be over just as quickly, if not sooner.

Hassan Kamel's Red/Black aggro deck had the nut draw, with Glarewielder pushing a Nova Chaser through for an incredible amount of damage. But Shawn Rayson's Kithkin were racing back just as effectively, and he busted a Pollen Lullaby all over Hassan's game plan, beating him to the finish line to take Game 1. Game 2 Hassan was forced to keep a slow hand off the back of a mulligan. His draws were kind enough to him, but couldn't trump the turn two Knight of Meadowgrain from Shaun, who never deviated from his plan of making a bunch of guys and turning them sideways to win the match 2-0.

Over on the other Table, Anatoli Lightfoot was again forcing himself into another Australian Limited Grand Prix finals appearance with his aggressive Elves and Giants concoction. André Coimbra tried valiantly to stand in his way, but Anatoli's trusty Incremental Growth showed up to break a stare down in Game 1. Game 2 was much more entertaining, with Anatoni again blowing André out of the water with Incremental Growth, but this time he surprised André and onlookers alike when he whipped it out from under his Mosswort Bridge.

Shawn Rayson and Anatoli Lightfoot practically raced each other to the finals this evening. Each finishing their quarterfinals and semifinals matches in almost record time, and certainly giving this old man heart conniptions trying to keep up.

Shawn was the newcomer here today, but nobody could doubt his skill as the results speak for themselves. Anatoli is an old hand when it comes to showing up in the finals for Limited Australian Grand Prix events, finishing second last year and again in 2004. 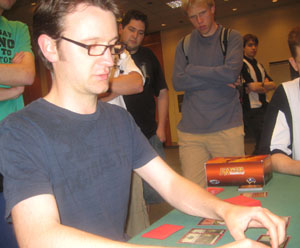 Anatoli won the roll and lead with a Forest and his Mosswort Bridge, hiding a Blades of Velis Vel. "Ten power?" Shawn asked incredulously. "It's happened twice already" Anatoli replied with a grin, adding a Elvish Branchbender to the table. Shawn answered with a Woodland Changeling and a Kithkin Healer, but lost the Changeling when a Gilt-Leaf Ambush tripled the number Elves in play and allowed Anatoli to turn one of his Forests into a 3/3 for the turn. Shawn replaced the fallen 2/2 with a Kinsbaile Balloonist and passed the turn back.

The Branchbender woke up another Forest (I admit, I wasn't paying enough attention, it could have been the same one) and sent it in along with the two Elves to wrestle with the Balloonist, who naturally blocked one of the 1/1s. Blades of Velis Vel pumped the Blocked Elf and the Forest, conveniently giving Anatoli eleven power in play, and allowing him to play the other Blades from under his Mosswort Bridge. Everyone lost count of just how much damage Shawn was taking that turn (imagine the spectators counting on their fingers, their lips moving silently) it was frankly ridiculous. 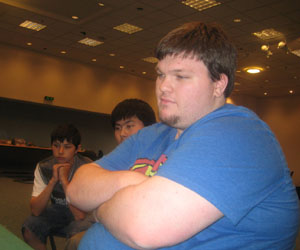 Shaun bounced back with a Knight of the Meadowgrain and an Oblivion Ring for Anatoli's Giant Harbinger, before championing the Knight to a Changeling Titan. Sure enough, Anatoli again found his back-breaker, playing Incremental Growth on his many weenies. Shaun delayed the inevitable with a his Pollen Lullaby for a turn, but was soon packing it in for Game 2.

Anatoli lead the second game with one of his three Elvish Handservants and a Fertile Ground, Shawn with a Woodland Changeling, boosting the Handservant by one. Missing his third land drop, Anatoli still managed to make a Gilt-Leaf Ambush with the Fertile Ground to take down the Changeling. A turn later, the Handservant and the Elf attacked into Shawn's fresh Veteran of the Depths, which died to a Blades of Velis Vel on the Elf. A Hillcomber Giant from Shawn inflated the Handservants to 3/3, and a Lowland Oaf from Anatoli to 4/4. Shawn's deck offered him nothing to stop it, and when Anatoli played a Giant Fire-Belly Changeling, Shawn just grinned and offered his hand with a chuckle. 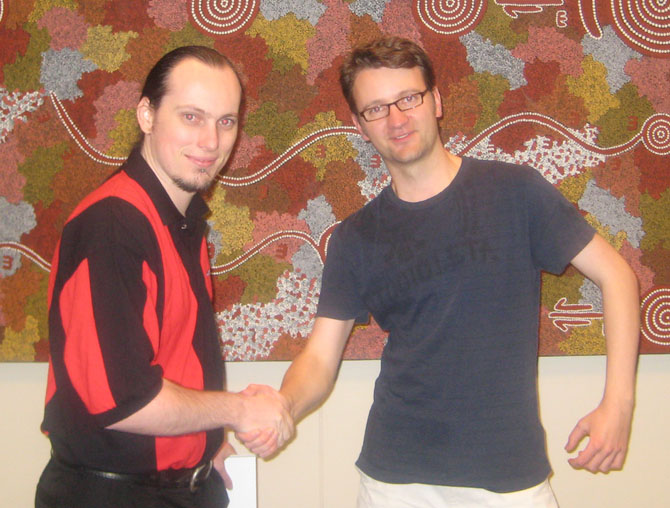